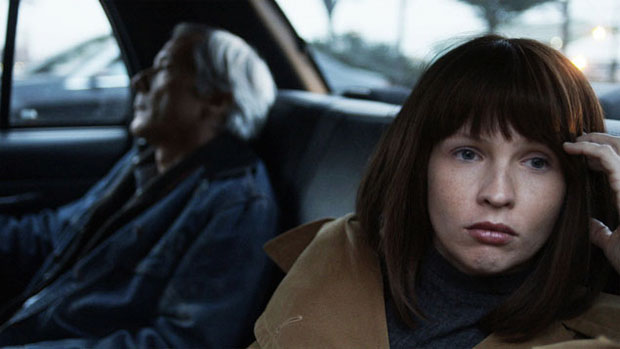 by Pauline Baudon
in Directors, Interviews
on Apr 20, 2013

The heroine of director Matt Creed’s Lily — premiering today at the Tribeca Film Festival — is the in last throes of successful breast cancer treatment, and finding that life after illness is supposed to pick back up right where it left off. We follow her as she grapples with life’s minutiae, sometimes victorious and sometimes not, in a bravely authentic portrait of an aspect of cancer survivor’s lives seldom portrayed on screen. Filmmaker asked Creed about tackling such a personal subject in his first feature film.

Filmmaker: The film is semi-autobiographical, based on your co-writer Amy Grantham’s experience with breast cancer: How was it handling material that came directly from a deeply affecting moment in her life? How do you go about portraying a very raw experience with the person who went through it not only co-writing but also starring in the film? Did you feel a great deal of responsibility in finding the right tone and approach?

Creed: My experience with Amy and adapting her story came very naturally to us both. Amy was very forthcoming about aspects of her life, which made it very easy for me. With that said, you have to be very sensitive to what they’re telling you and how you get certain things out of them. Writing with Amy was a lot like therapy, for her and myself.  In the early days of writing the script we spent a lot of time just talking. Some days we wouldn’t even write. I think that was important to let Amy just talk and I would listen very carefully and when something stuck out to me, I would jot it down.

Often I would get excited about something she was telling me. It would be very personal and I would say, “We really should write that,” but after thinking to myself, “Wait, this was pretty personal,” I would always ask if it was OK to write that. I asked that question everyday: “Can we write that in?” I don’t think she ever said no.

While a lot of this story is true, I made a conscious decision to change little details. I knew she was going to play this part, so I needed to tweak certain elements of her story so when the time came for her to start acting, it really wasn’t herself at all. For instance, Amy does date an older man in real life, only in Lily,= she is planning on leaving him; that’s not the case in real life. Her dad doesn’t know she has cancer, still to this day, and she’s never gone to tell him or even tried; in the film she does. Little things like that I believe can really alter someone’s train of thought or emotional well-being. In New York, we all walk the same way home, we have our very specific streets we like to walk home on, and if you walk with someone else who leads you in the same direction but down different streets it feels very foreign to me. It’s the same idea. I did feel very responsible to Amy and trying to stay true to our story or the ideas of our story.

Finding the right tone of the film was very important to me, but in doing that we had to cut a lot from the film. Because of that responsibility I felt towards Amy and knowing I had to be sensitive to how I portrayed this character on the screen, I was very nervous at first to show her the film. I wanted to her to be happy with it; I wanted her to feel that I expressed what we both were feeling. I think I did in the end (I hope)!

Filmmaker: The subject matter is undoubtedly very personal, but do you think the film is more about catharsis for Amy or about reaching individuals who may have the same stories?

Creed: I think making art is a very cathartic experience; it’s therapy in a way. At the same time, when telling stories and making films you want people to relate to it and you hope that it will reach people or an audience. I know for Amy it was definitely both. She needed an outlet for how she was feeling and writing this story was just that for her and myself. She really wanted to explore and show this side of her disease, because you rarely see it.

Filmmaker: This is your first film. What made you decide to make the jump from art and photography to film? Was it Amy’s story that made you want to commit to a feature length effort?

Creed: I think of it all as the same; it’s working in a visual medium. I am always taking photographs, making little films, and writing stories. Amy’s story was definitely the one I wanted to make the leap from short film into a feature length. I had written some other scripts, but Amy’s story just felt the most unique to me.

Filmmaker: The film is very contemplative, following Lily from a distance as she tries to make sense of life after the disease rather than making any bold statements about bravely battling cancer. Was there a conscious decision to adopt more of a cinema vérité approach, very pared down?

Creed: Yes, I definitely wanted to make a film that was very observational. I wanted it to feel as if the audience was a part of her daily routine and we were just another person in the room at times, watching and listening. I think it was important for this story to be told in a realistic manner. I wanted it to feel very raw. I also think New York City lends itself to this style of filmmaking.

Filmmaker: As a first-time director, did the experience of making Lily make you more enthusiastic about the medium, or do you find that you’re story-driven more than anything?

Creed: Absolutely! I had an amazing experience making Lily and I hope to be able to tell many more stories through the medium.  I want to try many different approaches and utilize all that the medium of filmmaking can offer me, which I know is a lot!

I really enjoy making films. It’s a lot of fun, but just like in Lily, it’s everything after that I struggle with. I’m new to it all and I’m learning as I go along.