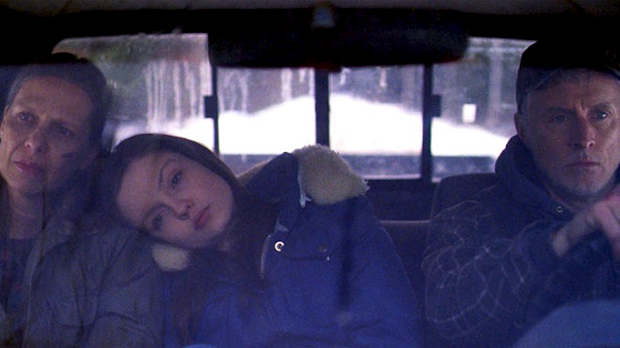 by Sarah Salovaara
in Directors, Interviews
on Apr 23, 2013

Bluebird, Lance Edmands’s quietly disquieting directorial debut, follows a cast of characters in rural Maine, where every good intention is rendered fruitless in the face of a tragic accident. Lesley (Amy Morton), the local school bus driver, passes over a sleeping student at the end of her shift, leaving him to freeze into a coma overnight. The boy’s drifting, negligent young mother, Marla (Louisa Krause), seeks solace in the possibility of a lawsuit, and distraction in a dalliance with her co-worker, while her own mother monitors the child’s health in the hospital. Lesley’s husband, Richard (John Slattery), is an inch shy from being cut loose at his decades’ long logging job, and their daughter, Paula (Emily Meade), searches for stability in all the wrong places. Edmands juggles the interwoven arcs with efficacy and patience, nurturing an all-star ensemble that rattles the viewer with its understated humanity. Following Bluebird‘s world premiere at the Tribeca Film Festival, Edmands spoke to Filmmaker about his transition from editing and the atmospheric influence of Maine on his work.

Filmmaker: Like your previous short, Vacationland, Bluebird was shot in your home state of Maine. How do its environs shape your storytelling?

Edmands: Maine is an incredibly important place to me. When I was a kid with a fierce desire to make films, I was dying to escape my small town. But after I moved to New York, I found myself returning over and over again to make projects. Over time, I discovered the memories and mythologies of where I grew up to be one of the primary inspirations for my work. For this particular project, the setting was first. I was fascinated with these towns in Northern Maine that are situated at the edge of the Great North Woods. They’re all these frozen-in-time mill towns that are slowly disintegrating as their one-industry economy sputters out. I found the environment there to be completely beautiful, serene and quiet. But, at the same time, there’s a real sense of desperation and an almost existential terror to the oppressive cold and endless forest. I was inspired to make a film that captured these two competing emotions.

Filmmaker: You started out as an editor, and edited Bluebird yourself, along with Dino Jonsater. Can you speak about the benefits of your background given the interwoven and ambitious nature of Bluebird‘s narrative, and the challenges–if any–that arise when you’re faced with cutting your own vision with your co-editor?

Edmands: When I worked as an editor I was able to be a part of the filmmaking process from the shooting draft of script to the final product. So I was able to see everything that got shot and then compare that to what made it on screen. When I went into production on my own film, I think I had a good sense of what would be essential and what would probably get cut, so I could manage my time a little better on set. That said, it’s still nearly impossible to know what works until you’re sitting with the material. We definitely made a lot of big choices in the editing room. I actually did bring on another editor, Dino Jonsater, who cut Tinker Tailor Solider Spy and Let The Right One In. I love those movies, so I really trusted him and it was great to have another voice involved. He would force me to make a case for keeping certain scenes or shots and it made me really articulate my ideas. Otherwise I would have been working purely instinctively — which can be great, but you have to balance instinct and intellect in order to make bold, clear choices.

Filmmaker: In dealing with large ensembles, some writer-directors have the tendency to throw several bodies into a room and let the introductions play out before the camera. With Bluebird, each principal character is presented as their own person before their relations are quietly brought to light. How did you go about juggling several narratives with such measured patience?

Edmands: I wanted to begin the film with simple observations of people living in this town on a normal day. We meet each character in their own environment and we come to understand them through their behavior. I didn’t want to rush anything. By just watching someone you learn a lot about him or her, and I wasn’t interested in laying it all out too quickly. I think a film pulls you in more if you’re curious. As an audience member, you realize this movie isn’t going to hold your hand. You’re going to have to draw some connections yourself and make inferences, which gets the brain working outside the frame and, in the end, makes the film richer because you’re thinking more. I think when audiences see the film they have a full understanding of these people and their lives, but with very minimal information. That’s because it’s all implied and the information is carefully withheld until it’s relevant. To me, this feels more like real life, when you have to work a little bit to understand something.

Filmmaker: The film demonstrates the devastating impact a seemingly simple oversight can have on a series of lives. What was the genesis of the script? Did you begin with this notion, or the cast of characters?

Edmands: I began with a feeling that I got from the landscape and I wrote the script to try and capture that feeling. To me, a movie works best when it functions like a piece of music. A song doesn’t tell a story, it captures an emotion and sustains it. So that’s where I started. I wanted the story to follow different people who personified this place—a logger who is losing his livelihood, young people who are trapped in a place without options, and a woman who experiences a kind of existential crisis when everything she has begins to erode. The story of the boy being trapped on the school bus came from an event from my childhood that really stuck with me. When you’re living at the edge, it’s so easy for one tiny mistake to have devastating consequences. I wanted the tragic event that linked these people to be both horrifying and mundane at the same time. There is an overall sense of being trapped and being frozen, so the literal tragedy also becomes a metaphor that links everyone in the film.

Filmmaker: Bluebird belongs to the ever declining shot-on-film camp. How did your decision to shoot on stock influence filming? Were you forced to rely more on instincts in presumably holding back on the number of takes?

Edmands: I wanted to shoot on 35mm from the get-go. I knew it would be a hard sell to the producers given all the technology improvements that make certain movies shot on video indistinguishable from those shot on film. But there was something about this landscape that called for it. The place was kind of stuck in an earlier time, with a lot of texture and grit, and I felt that film was the right medium to capture that. My d.p. Jody Lee Lipes really pushed the film look as well, underexposing it to bring out grain and using a lot of low, natural light. I don’t think there are many low-budget films that look like Bluebird, and I wanted to set it apart from that slick, crisp, digital look that you see everywhere. In terms of takes, I didn’t feel limited because I also chose to shoot very little traditional coverage. I knew where I wanted the camera to be in every moment, so I didn’t have to grab a bunch of angles and find it in the editing room. We stayed wide, or shot a single master, so that the environment was present in every frame.