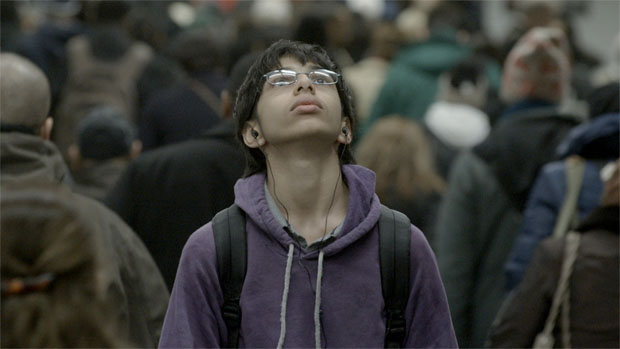 One of the buzz titles at the Tribeca Film Festival this year is director Sam Fleischner’s sophomore feature, Stand Clear of the Closing Doors. The film has a compelling premise, as it deals with Ricky (Jesus Sanchez-Velez), an autistic 13-year-old boy from Brooklyn’s Rockaway Beach, who runs away from home and spends days on end traveling around on the New York subway system as his mother (Andrea Suarez) and sister (Azul Zorrilla) do their best to find him. Fleischner’s movie also garnered a modicum of attention as it was shot partly during Hurricane Sandy, and ultimately incorporated the storm into the film’s narrative. In the wake of the film’s world premiere, Filmmaker interviewed Fleischner over email about the difficulties of casting the lead role, shooting on the subway, and how the film was reimagined after Sandy.

Filmmaker: How and when did you first become involved in this project? How did your approach to directing differ given that you were not one of the writers?

Fleischner: I became involved in this project in 2010 after reading stories about autistic kids running away on the subway. It was my idea to make this movie so I was heavily involved in the screenwriting process, and worked closely with Rose and Micah. There was also a lot of writing with the camera, the edit, through improvisation, and rewriting on the fly — especially in order to incorporate the storm. When making a movie at this scale it’s essential for the director to be involved in every facet of the production but it becomes silly when their name appears in all those places when it’s so many people’s hard work goes into realizing the vision.

Filmmaker: Finding the right actor to play Ricky was obviously a crucial part of making the film work. How did you set about doing that, and how long was your search?

Fleischner: It was important to me to work with a kid on the spectrum, and since the family in the film was Central American, we were limited to a rather small pool of kids. That said, we probably auditioned a couple hundred. My casting director, Eleonore Hendricks, was active on the streets, in the schools, and on blogs where she eventually found Jesus Sanchez (in Florida!).

Filmmaker: Much of the film was shot on the subway. How much were you able to shoot discreetly and use real people, not extras? Did you get cooperation from the MTA, or did you just steal most of the shots?

Fleischner: Since we were using a big pro camera it was hard to be discreet. For the most part we were vocal about what we were doing and people were happy to cooperate with their presence or willingness to move.  The cast was a mix of people we brought in and people who just happened to be there. Only a couple people seemed to get really annoyed but I think they were annoyed at life in general. You don’t need permits to shoot on the train as long as you’re not on a tripod so we were always armed with the MTA rulebook in case anyone challenged us.

Filmmaker: How loose was the script, and what form did it take? How much room did you leave for improvisation, inspiration, accident, etc.?

Fleischner: The script was very tightly crafted when we went into production and it worked well for most of the professional actors. I was always quick to throw it away if a scene wasn’t playing naturally. There was a lot of improvisation in the film and even more accidents.

Filmmaker: How were you able to work Hurricane Sandy into the film? How much did you have to change what had previously been shot or planned?

Fleischner: The original ending was impossible to shoot as a result of the damage caused by the storm, however; the hurricane provides a more profound and thematically cohesive conclusion to the story.