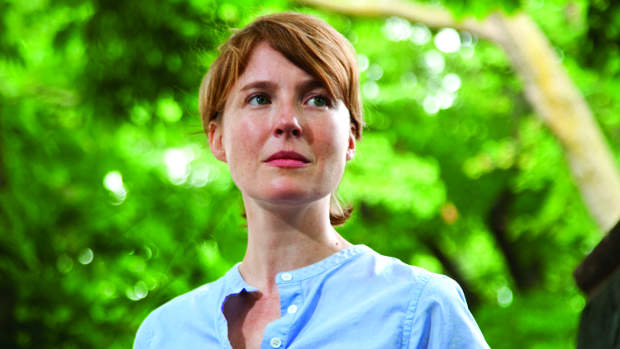 For Arielle Javitch, whose first feature, Look, Stranger, is currently in post, moviemaking and movement have always been intertwined activities. She began her career as a dancer, and when a back injury sidelined her from performance, she began to make short dance films. “They started as pure movement, and then they began to get more narrative,” Javitch remembers. “One of my shorts was about refugees, and I used testimonies from different [refugee] stories, trying to make them visual through dance and other imagery. The film was beautiful, but it didn’t succeed, and then I knew I had to move into narrative filmmaking for [this refugee story] to have an impact.”

Javitch began to develop a screenplay based on the simplest but dramatically fraught tale of movement — the story of a refugee woman maneuvering herself home through a war zone. To understand the psychology of her protagonist, Javitch researched various refugee crises and did interviews, but she also simply imagined herself as the woman. “I tried to make it very personal,” she says. “Would I fight, or would I yield in these kinds of situations?”

Around this time Javitch began working with producer Lisa Muskat, whom she met through her sister, a costume designer. Over the next two years, the project came together almost “through trial and error,” she says, as Javitch and Muskat looked for a shooting location, agreeable production partners, and an actress to play the journeying refugee. They wound up in Serbia with 4 Months, 3 Weeks and 2 Days star Anamaria Marinca in the lead role. “Anamaria is one of the smartest people I’ve ever met,” Javitch says, “which is intimidating. But she really helped me elevate the thought level of the project. There was a question of, “Would this film succeed as a parable without being grounded in the reality of a specific war?” She was behind me [in avoiding the specific]. I tried to find a balance between realism and allegory. The tension between the real and the allegorical, that’s what’s most interesting to me, and Anamaria helped me be fearless in my choices.”

Look, Stranger, which was made through private equity and grants from organizations like Cinereach and the Sundance Institute/Annenberg Foundation, is currently in post, having completed a cut at the Edit Center in New York City. And now that she’s about to start submitting it to festivals, Javitch, who works as a yoga instructor when she’s not making films, is suddenly a bit more reticent to actually describe her movie. “It’s an antiwar film, but also, without wanting to sound too grand, I want it to be a search for meaning. I want it to ask the question of why are we here. But, in a way, it was much easier to describe with words before it was made. Now that it’s made it’s hard to speak for it.” — S.M.