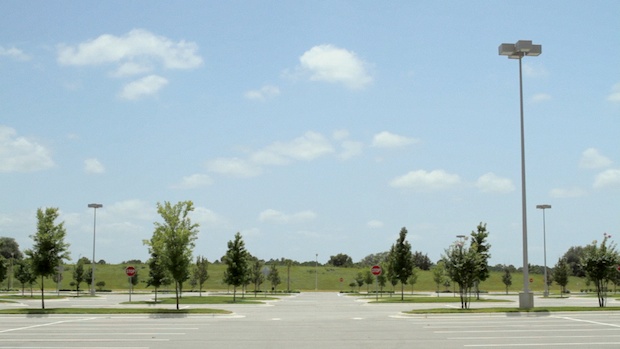 by Scott Macaulay
in Directors, Filmmaking, Interviews
on Jun 5, 2013

Among the discoveries at the 2012 edition of CPH:DOX was Brooklyn-based Brent Chesanek’s City World, which is part magic realist children’s adventure tale and part austere landscape documentary. Over precisely framed tableaux shot in his hometown of Orlando, FL — nearly all of them completely absent of people — Chesanek drapes the narration of a young boy mulling the breakup of his family and subsequent move, with his father, to this Southern city. As in another recent film, General Orders No. 9, contemporary landscape photography is presented as historical residue meant to be both meditated on and explicated. Drained of any sign of life, Orlando — its real estate developments, swamps, and deserted theme parks — becomes both a mausoleum of the present as well as, for our young narrator, a blank canvass on which to imagine a new, better world.

I spoke with Chesanek for a few minutes before the CPH:DOX closing night party about Orlando, landscape, and the appeal of one-person crews. City World receives its New York premiere tonight, June 5, as part of the Hammer to Nail Screening Series at Brooklyn Fireproof. Showtime is 7:00PM and Chesanek will be there for the Q&A. If you’re in town, I recommend checking it out.

Filmmaker: Tell me a little bit about the story — not the images, but the children’s story that forms the narration of the film. Where did that come from? Did that exist separately, before the film?

Brent Chesanek: The story kind of grew out of the images. Orlando, there’s this sort of “escape from reality,” this Disney sort of aspect to it. I didn’t want to be explicit about that, but you can’t really ignore it. I wanted to do [a film based around the] imagery of Orlando, so I started doing factual research. During my research, I started looking for little anecdotes about these amazing feats of mankind in settling Florida. Finding these little anecdotes and putting them into an adventure kind of thing — that was always there. Before the casting [process], I thought I would try to find a kid who would be able to come up with these amazing sort of stories [on his own]. But I don’t know that that’s the kind of director I am. So, the personal aspect, that just came out of me; it didn’t come out of the kid.

Filmmaker: The personal aspect, meaning the story of the father and his separation from his wife?

Chesanek: I brought that. That was like the last part that I added. I put the more emotional, structural, screenplay-ish type of work into that. I knew based on the editing it wasn’t going to be a perfect linear story — I wasn’t trying to tie the historical, factual anecdotes into a straight linear sort of thing.

Filmmaker: Did you shoot the imagery before the story? Or did the story come later?

Chesanek: We shot two days in 2009. We didn’t know what [the film] was [going to be]. It was maybe just going to be an ambient music video. I shot some houses, kind of like real estate photo shots. Not much of that is in the film because it’s an older camera; it just looks completely different. Then the rest of the shooting was 15 days in the summer of 2010. I just flew down there and shot, did a rough assembly and had some slates [in the edit] of what we were hoping to get the next time [we shot]. I had the script, cast the kid, did a scratch voiceover with me, shot the final 15 days and then recorded some of the kid’s voiceover and started piecing it together. And then recorded more voiceover.

Filmmaker: So, the idea of juxtaposing the child’s voiceover/adventure with the images, was that the idea for the film once you became serious about it?

Chesanek: Not totally from the beginning but pretty close. Once you start thinking of Orlando, you start getting into theme parks. Kids always have a greater expectation of an adventure.

Filmmaker: And what about the idea of Orlando being totally depopulated?

Chesanek: We were always looking for these depopulated areas. While shooting we’d be like, oh, wait, this is empty, let’s move the camera back and make [the shot] wider. The first few days of shooting I just found myself going into these empty areas. But the [concept] of making that an aspect of the film came a few days into shooting.

Filmmaker: Did that then become a challenge you had to struggle to live up to? At what point did you say, “Okay, I’m committing to this way of shooting?”

Chesanek: Most of the time it was just me on set. So if it’s just you on set, there has to be something pushing you, especially if you’re just doing these observational things. What was pushing me was finding a way to get as wide as possible [without including people]. I thought that was an amazing hook to the film, that it’s a kind of abandoned non-wasteland — an up-kept wasteland. So I tried to find the most pristine things I could find without getting people in the [shot].

Filmmaker: How difficult did it become to keep getting those pristine, people-free shots as you went on?

Chesanek: Gas and patience, it took a lot. When you’re just on your own, it’s hard to say what’s difficult… Everything was just done on my own will and whim. There wasn’t a deadline, or a budget that was creeping over. But it was difficult. Having grown up there, I would have kind of an awareness of where I should go, and it was mainly to these places I’d never been. You’d see a new exit on the interstate [and think], “I haven’t been there.” Some of these shots, I was getting 12-minute takes without a car [going by]. And behind me would be a full residential neighborhood.

Filmmaker: And you grew up in Orlando?

Filmmaker: The film has the feeling of childhood memory — that emptiness is like the way you might feel as a child, even when there are people around. Do your childhood memories figure in this film?

Chesanek: Surprisingly, no. All of the inspiration, the drive and the fascination came after I left. You move to New York or anywhere different, and then go home for the holidays and you re-approach a landscape that was always taken for granted as being normal. And you notice what’s different about it. Suddenly I was a visitor there instead of someone who thought that this was just what the world was.

Filmmaker: Were you thinking of any influences or antecedents in terms of the form? Were there other films you had thought of, other people? I thought of artists like Richard Estes and the photorealists of the ‘70s. Many of their photographs had no people in them.

Chesanek: [Werner Herzog’s] Lessons of Darkness — this idea of a documentary being framed as being from a visitor. And then these French architecture documentaries. They have people in them, but they just kind of move this camera around spaces and explore. And then Chantal Akerman’s News From Home. After shooting, General Orders No. 9 came out and I was like, cool, we’re not totally making something that’s going to disappear and nobody will know what to do with it. But I think once I got on set, I just had this idea of trying to find new things and dropping all ambition — almost half the time not even thinking I’m making a movie. I’d just set up this shot and then maybe I’d click on my phone for someone to get lunch or something. I tried to detach myself from this idea that it was this big ordeal. Just explore it and if something comes of it, cool. But don’t put too much pressure on finding something that works.

Filmmaker: It’s interesting that you conceived of a feature film as a one-man endeavor. I know many writer/directors who are used to working in solitary ways as screenwriters. And then they do a first film and suddenly they’re surrounded by all these people, and it’s a shock. But, for you, the nature of this film maintained that solitude.

Chesanek: Yeah, it was the only way that I thought I could get it done. Previously, I had naively tried to set up other films — bigger budget narratives, not huge budget.

Chesanek: Yeah, that I’d written and was gonna direct and was gonna have a crew and all that stuff, which I’d never done before. My short film, I had some crew, but they were volunteers.

Filmmaker: What kind of film was that bigger film?

Filmmaker: And how do you feel about the film’s classification as “documentary”? We’re talking here in Copenhagen at CPH:DOX, a doc festival.

Chesanek: Originally we were just going to say it’s an experimental narrative film. “Landscape narrative” is what we were calling it. Then on some film festival’s checklist there was “creative documentary.” We didn’t want to downplay how amazing we thought these empty roads, neighborhoods and landscapes were. That’s the raw footage, so in that sense, we were like, it’s documentary. And the stories are all kind of based on legends or myths, aside from very personal family stories, so we’re fine with that documentary label. We embraced it. You can point to other documentaries that have a lot of staged events in them that are pure documentary. I think Michael Moore’s documentaries are documentaries, and they win Oscars, and there are events in there that are staged way more than whatever you see in ours.

Filmmaker: And what did you shoot it on?

Chesanek: Most of it was on the Canon 7D, and just whatever basic lens that I had. It was probably the Canon lens, the 18 – 70mm. I rented it from a shop down in Orlando. It was always whatever I had access to. I was self-financing so, the first week out, I was like, all right, I’ll test out this package and see if it works. It’s one I could easily afford, and so I stuck with it.