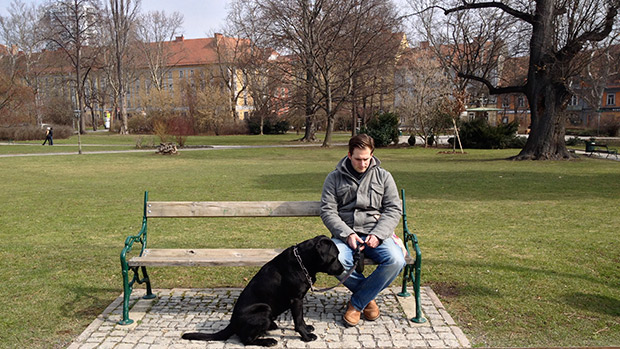 What do you do when you get a new camera? Some people run out and shoot test footage, while others just gamble and use the camera on the next shoot they have lined up. When Stefan Müller, an Austrian freelance film director, d.p. and editor acquired a Canon C100, he went out and shot The Scent, a 12-minute short.

One of the stars of this short is a black Labrador called Sky. Despite W.C. Fields’ admonition, “Never work with children or animals,” Müller captured a great performance from the dog, yet when asked if anything interesting or unusual happened during the shoot he replied, “Unfortunately, not really.”

He did, however, answer our questions about the shoot, and offer some thoughts on his success making a movie that included a four-legged actor.

Filmmaker: Where did the idea come from?
Müller: That was very spontaneous, really. I have a good friend who has this lovely Labrador dog called Sky and I always wanted to shoot something with him. So I spent a few nights putting together a story, scripted it roughly and called my friend to see if it was fine for her to lend me the dog for a few days. Fortunately, she said yes. 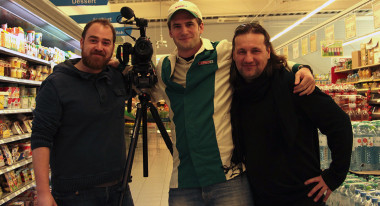 Filmmaker: How difficult was it working with the dog?
Müller: I remember that one line from the special features of Gladiator, where Russell Crowe asks the trainer of the tigers if there is something he should know before he shoots the scene and the trainer tells him, “Well, you know, animals don’t act, they are.” I always thought about that line and if you go with that, it works extremely well.

The other thing was, I’ve known the dog for many years now, so that of course also helped.

Filmmaker: How long was the shoot?
Müller: We shot the whole movie in three days.

Filmmaker: How did you find the actors?
Müller: The girl in the movie is my girlfriend, so that was easy(!) and the boy is an actor I knew from a previous project who had time for exactly those three days, so we had to finish the movie in that period of time.

Filmmaker: How big was the crew?
Müller: The actor, the dog, a camera assistant and me.

Filmmaker: What lenses and rigs (if any) were you using with the camera?
Müller: I am so happy with the C100 because of its form factor. I didn’t feel the need for a rig, it’s such a lightweight camera and for the few handheld shots in the film, I trusted the Image Stabilization of the lens and I’m glad that worked out. I only used the Canon EF-S 17-55 f2.8 IS lens, and a Manfrotto 055xprob tripod with the 501 head. I also used a Kessler Stealth Traveller slider and some Litepanel Croma kit lights.

Filmmaker: What have you been shooting with prior to the C100? What differences did you notice shooting with it?
Müller: I shot a lot with the Sony NEX-FS100. The FS100 is a great camera, amazing picture, but it’s form factor and the missing ND’s were my major complaints about the camera.

I don’t have a problem with shoulder rigs, but the amazing thing about the C100 and an IS lens is that you don’t necessarily need one, and that’s just great.

Müller is currently working on a low-budget independent horror movie called BIEST, shot on the NEX-FS100 and set in the mountains of Austria. It will be released in the fall.