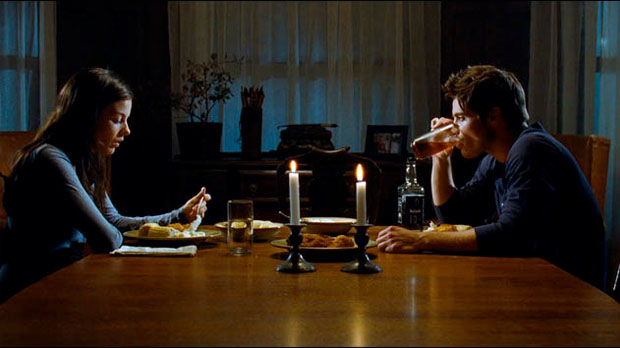 by Brandon Harris
in Directors, Interviews
on Jun 20, 2013

In Antoni Stutz’s 90’s throwback neo-noir Rushlights, the casual flirtation between a very young, low-rent con-man, Billy (Josh Henderson), and ex-junkie turned lunch-counter waitress Sarah (Haley Webb) quickly grows into a torrid love affair in a tiny Texas hamlet, the type found in thrillers where money and guns often find themselves coming together in dangerous confluence, that bespeaks trouble. When Sarah’s roommate, with whom she has a remarkable resemblance, OD’s on heroin, she’s convinced by her cunning new lover to assume the dead woman’s identity after learning that she’s due to receive a hefty inheritance after the death of a wealthy businessman who happens to be her uncle. Although his estate lawyer (Aidan Quinn) buys their ruse initially, they immediately arouse the suspicion of the local sheriff (Beau Bridges), who happens to be the lawyer’s brother.

Featuring an array of impressive performance and technical credits, the film is reminiscent of John Dahl’s early 90’s thrillers such as Red Rock West and The Last Seduction. Gregg Easterbrook’s sunburnt cinematography is particularly laudable; he bathes the images in harsh yellow rays and smoky brown to great affect. Bridges is especially fine, as is Crispian Belfrage as a remarkably disturbed drug dealer. As hidden motives and vengeful peripheral figures in both the dead young woman’s and businessman’s life begin to surface, Belfrage’s villain proves to be one of the most entertaining of his sort in some time, the maniacal intensity he achieves recalling Ben Kingsley’s marvelous turn in Jonathan Glazer’s Sexy Beast. Filmmaker: So how did you come across the true story that the film is based on?

Stutz: The co-writer, Ashley Scott Myers, came up with a newspaper article about two kids who tried to pull a similar scam in Alabama, an inheritance scam. Once I heard about the story, I thought that something was there. Perhaps if we put it in a different location. So we fleshed out a treatment where I would make the central characters a little younger in order to give the film noir aspects of the tale to a different audience. Their encounter in this small town, some of it is fiction certainly. So it’s a mixture of both. That’s why it’s “inspired” by true events. The love story has a lot of truth to it. Truth in respect to the fact that Sarah is more or less based on an ex-girlfriend of mine.

Stutz: Well, you write what you know. She has that silent strength. Sarah ultimately turns out to be the strongest character in the film. Initially she’s the weakest, she’s the loser, she’s the one who’s just out of rehab. Everyone is dominant with her. In the end, it’s her who’s giving Billy the chance to redeem himself. She goes through this whole journey in the film to discover herself and come out stronger. I find that to be relatively compelling because its an all-male movie and yet when you look at it a little closer, it turns out to be her movie.

Filmmaker: Was it difficult to raise money? Its been a while since your previous film, You’re Killing Me…. Was cast important in terms of putting together the financing?

Stutz: It just amazes me that any movie gets made. It’s a very difficult path to raise the first few hundred thousand dollars, to build on something. It’s a very difficult task to finance a film, whether it’s five hundred thousand or five million. To get people to commit to something that’s basically a gamble is a difficult thing to do. My situation was I got lucky, I found an investor who really liked the project very early on, he liked the script, he was one of my sponsors with my art work — I have a fine art background — and he put me in touch with some other people. So based on that we had a little bit of seed money, we could rent a tiny little office and then we approached Beau. He liked the script. The first time I met him, we spent an entire afternoon talking about my art work. I think he was curious to spend some time with me and see what I was all about. Then he finally committed and we talked about the script more and then Aidan came on, based on Beau, and then with Josh, who was a nobody at the time, I pretty much knew right away I was going to give him the part. He was not only good, but he had this guy-next-door look, where you would never suspect that there might be something wrong with him. That was the idea about casting Josh in this role.

Filmmaker: Was it easier to raise the rest of the money at that point once you had all of them on board?

Stutz: Then it was a little easier, but it’s not like you can go out there and advertise that you’re making the movie yet. We started out really tiny and then it grew on us and yet we still had all the constrictions of making a small movie and asking tons of favors. We put a lot of work into it, a lot of people worked really hard to achieve the look of this film, and I really like the way it looks, so I wouldn’t say it was made on a shoestring, but it was made for pretty close to a shoestring and Aidan and Beau did not make nearly what they usually make. All that needed to fall into place. It takes determination. It’s not for everybody. I’m not even sure it’s for me. I don’t know if I want to do it again.

Filmmaker: I ask myself that question all the time. It’s grueling. It changes you.

Stutz: It’s brutal, man. It’s brutal. I think the most brutal thing about it is that it really causes you to have to face yourself as a human being. In a really short period of time you get to see the worst and the best of yourself and so does everybody else. It’s in a very compressed time frame. We were very lucky. We should be very grateful. I’ve seen it go south so many times on other projects. It’s easy for that to happen because you have so many different components, so many dynamics at work that need to be right, just to get off the ground. It’s a tall order for anybody. It’s not like you’re opening a bakery and you have one boss; you have a lot of different people working on a film. Everybody has their opinion and they’re entitled to have their opinion. So it is what it is. I’m at the point, definitely, where I’m saying, “Do you really ever want to do this again?” But unfortunately when you’re an artist and you really are compelled to make movies, two months later, after you’ve already said, “I’m never going to do this again,” you start scratching like a dog and you go, “Hmmm…, this looks like an interesting story.” It’s the artist’s curse. You can’t help it.

Filmmaker: How has the world of independent movies most dramatically changed from your perspective since you made your first feature as a director over 10 years ago?

Stutz: The first feature was a movie that was more of a student project. I didn’t edit the film. I had very little do do with it if you compare it to this money. I wouldn’t call it my student thesis film, but it got picked up and then exploited. After it got picked up, the movie was more or less taken away from me so I can’t claim that it was my first time out of the gate. Rushlights is really my first director’s film. I love it, I directed it. I also had some say in the post. But how has the world changed? A lot has changed. I think 10 years ago it probably would have been a walk in the park to break even. Those days are over. Just get someone to see it today is already a miracle. The decline of DVD hasn’t really been equaled out by the rise of VOD. So we’re going through this wild transition and no one really knows what the outcome will be from this. It’s a difficult question. It makes it very difficult to raise money because no one really knows what financial model to operate under anymore. What do you tell the investors? Everybody is dancing on eggshells a bit. Where is this gonna go? Is there any money left?

Filmmaker: What surprised you about the nature of the movie you were making while you made it that you hadn’t previously considered?

Stutz: That’s a great question. Early on I knew it was a tight script and I had the mechanics down on it and felt fairly solid about it, but what started to interest me right away was the chemistry between Josh and Haley and I saw a great opportunity there to make the love story within the film sing. The kids started to really interest me. The choices that you make at 20 are much different than the choices you make at 40, or even 30. They’re much more calculated. So I started to realize this stuff as I was shooting. They were coming up with stuff I had already forgotten about. It wasn’t so preconceived. They were going on this journey here, they had no idea what they’re doing. If she was 30, she’d be asking him a million questions. At 20, with nothing to lose, you’re like, let’s just do it, let’s see what happens. I had an incredibly amount of liberty in respect to the two of them and they felt an incredible amount of liberty in the circumstance.

There are so many surprises. That’s sort of the beauty of it, in a way, if you have the privilege to make a film. You started at 6am in the morning and you think you have control of it but you have no idea what’s going to happen by the end of the day. Anything could happen. If you don’t try to fight it, it’s kind of cool in a way. If I throw a bucket of paint against a canvas, I don’t really know how it’s going to come out, but if I try to control it, it’ll probably end up looking too controlled. I was very much into — within the time constraints that we had — letting go, as much as I could, of the control. I did a couple takes where I’m like, “Let’s try it my way,” but after that I’m like, “Let’s see what you guys come up with.” It’s not a democracy per se, but you’ll be surprised what people come up with. I was very impressed with other people’s talents in the most positive way on this film. Beau and Aidan are so seasoned, they knew how passionate I was about this project, but if you give them the space, along with the unknowns, and you’re not a total dictator, surprising things happen. We got a couple of moments like that in the film and I think it separates the film a little bit from the genre stereotypes that people would try to pigeonhole it into.