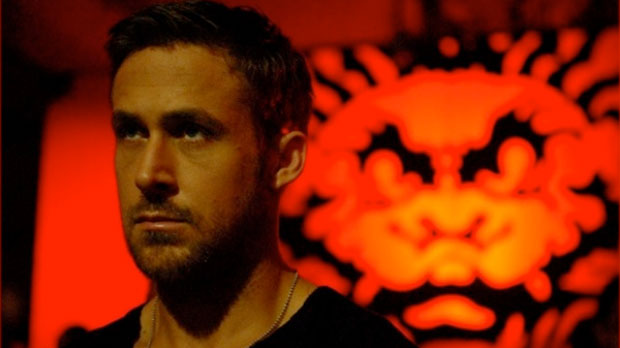 by Brandon Harris
in Directors, Interviews
on Jul 19, 2013

A superviolent and supremely strange Bangkok nocturne, Only God Forgives is Nicolas Winding Refn’s follow-up to his Cannes award-winning pop culture sensation Drive. This film, sure to be nowhere near as popular, is a distinctly less accessible affair. One senses that the filmmaker, a born contrarian, takes a certain pleasure in this.

In both Thai and English, it meditates on a white man who trains child fighters and runs a family-operated drug ring with his brother. When said brother is dispatched via some brutal south Asian justice involving really sharp swords (after he is found to have rapped and killed a teenage prostitute), our Western family is torn between those that want to seek revenge and those that don’t. Featuring another taciturn performance from Ryan Gosling, a career-altering, Lady MacBethian turn by Kristin Scott Thomas and one of the more affecting (and effective) no name newcomer discoveries of recent memory in the form of Vithaya Pansringarm, who plays the local constable bent on foiling Thomas and Gosling’s mother-son revenge plot, the film is a candy-colored kaleidoscope, a mythic piece of near camp, a brutal new entry in Refn’s undeniably fascinating filmography.

The 42-year-old Refn, who was raised between Copenhagen and New York City, cut his teeth making low-budget crime thrillers in his native Denmark. For over a decade, he was most notable for his Pusher trilogy, the first of which was recently remade in English. He gained increased international notoriety with his 2008 biopic Bronson and 2009 medieval Norse action flick Valhalla Rising, but it wasn’t until the international success of 2011’s Drive that he was vaulted into the top tier of international auteurs. Only God Forgives bowed at this year’s Cannes to great derision and controversy. It opens Stateside via RADiUS-TWC today.

Filmmaker: Despite the rape and murder and general sense of violent excess that one finds throughout this picture, I actually found it quite funny, almost campy. Did you think it was important for the film to have some levity?

Refn: I think the film needed comedic moments. I wanted moments of humor because that would only underscore all the other fetish qualities the film would have. If Drive was like cocaine, I wanted this film to be like acid. Good taste is the enemy of great art.

Filmmaker: When you talk about being a fetish filmmaker, what exactly is one supposed to find in this film that links it to the others and your own predilections and predispositions?

Refn: It’s not like I have a list I want to check off of want I want to do or not do. I approach it like a fetish because if I don’t, I would spend too much time thinking about whether something was the right thing to do or not. I saw the whole thing like a pin-up magazine. Every frame has its specific function. It’s only when you have flipped through the whole movie, or the whole magazine, that all pieces will add up. I have to ask myself, what would arouse me? It’s almost like taking off your clothes in front of an audience and indulging in your deepest desires despite the consequences. It’s a great creative outlet. To me, filmmaking is not about the result, it’s about the process. Finding ways to make that process purely an act of expression and not a consequential thought process and a series of reactions.

Filmmaker: What drew you to Bangkok initially?

Refn: Thailand is a very popular spot to vacation for Scandinavians. The first time we went to Thailand it was my wife and I. We went to Bangkok and really liked the city. We went back with our children. We experienced the whole beach world of Thailand. It was fantastic. We started coming regularly, every year, and we always made a point to stay over in Bangkok for two different reasons. My wife had one reason and I had another reason. I began to become interested in what it would be like to make a movie there. So I think the initial spark was what would it be like making a film in Bangkok.

Filmmaker: Fairy tales and myths have always been an important source of inspiration for you. Were they this time around?

Refn: It’s a combination of many things. It has a very different language than Drive. Part of it was to make a crime drama in this very different part of the world that was a bit of a haven, and yet Westerners are living in exile. They’ll never be part of Thailand for real and yet they cannot leave Thailand. The idea of strangers in a strange land is very dramatic. Surroundings are foreign to you and yet you live within it. So the idea of a crime family and the head of the crime family being a woman. I think especially as Americans this is sort of a taboo or an unusual idea.

Then I had this idea of including a fight gym in this. One night in Scotland I was bored and I started looking at my clinched fist. I thought, “God this is a classic image from a fight movie.” All it is really is just the consequential symbol of male masculinity and male sexuality. When I opened my fist, my palm, it was like the ultimate submission. I thought that was an interesting trick. Then this idea of a mythological figure within Bangkok, a classic sheriff, almost as if I was making a Western, where there are people causing trouble in the city and the sheriff has to restore order. I really wanted him to come out of Thai mythology, however. I was going to shoot the entire movie by night, and by night Bangkok becomes this very mysterious, mystical landscape. It was pure Thai in its aesthetic and its mindset. The spiritual world and the world of reality coexist. It’s very intoxicating. So it’s the combination of all of those elements, that was the movie becoming what it was.

Filmmaker: When we chatted about Drive a few years back, you spoke about going to L.A. and wanting to have a classic Hollywood director’s experience. So you got a house in the Hollywood Hills, you took meetings and gave notes in offices on studio lots, you actively sought to live a myth of what L.A. filmmaking is all about. Was there a way in which the experience of going and making a film in Thailand offered a similar emersion in a exotic kind of working style being a European director?

Refn: I think the idea of doing Drive as a pure, romanticized L.A. thing — coming to Los Angeles, living in the Hollywood Hills, working on movies, being a foreigner, making the kinds of films you make within the dream factory — it’s a fairy tale itself. In Bangkok, the idea of making a supernatural movie from an Asian point of view was intoxicating. I felt like a stranger in a strange land making the film. I had to remove all of my Westernized logic and sense of law to understand and experience a completely different mindset.

In the end, when we came to Bangkok, my daughter, youngest of four, can see ghosts. We knew ever since she was born. We came to Bangkok when she was two. Once you realize your children have this ability to see ghosts, it’s really something. In Bangkok, we were living in a haunted apartment. She’d wake me up four or five times every night pointing at the walls screaming, “No!” Something was trying to communicate with her. It was very annoying, very tiring. In the end, I had to call the production manager and be like, “There’s a ghost in the apartment. What can we do?” And she, accepting that experience, coming over with a shaman, quenching the apartment, realizing that their were spirits here, it wasn’t a dangerous spirit but it was very annoying to my daughter because it kept trying to communicate with her. It had latched onto us since we’d gotten to Bangkok. For us, it was truly a contest. At the same time, realizing the acceptance within that culture of the spiritual realm right alongside the acceptance of the iPhone and the Internet, both at equal levels was what the movie had to become.

I wanted to create a tableau of a mother-and-son relationship. The need to confront his mother manifests itself through a third person who is one part supernatural force and one part real. A bit like my own experience with my daughter’s abilities. Accepting that there are two levels of reality.

Filmmaker: What about Ryan Gosling’s silent visage are you particularly drawn to? You get these remarkably evocative performance out of him that are nearly wordless.

Refn: He has this incredible ability to say a thousand words without dialogue. That’s such a good canvas to work with. For this film, the whole design of a man being chained to the rule of his mother, it’s almost as if his mother has put a spell on him, so he’s like a sleepwalker. The Cabinet of Dr. Caligari, that sort of thing, the mythology of the sleepwalker, caught between worlds, the desire for his mother and the repulsive attitude toward his mother. He hates her, he loves her, he wants to have sex with her, he’s repulsed by her. It’s a very primal attitude between all men and their mothers, whether we like it or not.

Filmmaker: Kristin Scott Thomas had never done anything remotely like this. What gave you the impression that she could do it?

Refn: Because of my budget, I had to clear any celebrity casting. I had no one originally in mind. We were looking for anyone who had all the aspects the character needed. In the end the casting director suggested we try KST. I was like, “Yeah, might as well,” so I sent the script to her and she responded by wanting to read it and talk about it and then we met in Paris. I had a certain perception of her, of what kind of actress she is going in which is still there. Yet in the course of out dinner I realized that she’d have no problem going where I needed her to go. So after dinner we sort of agreed that we should go on this journey together. She made a big point to suggest that if she were going to do this, she would want to transform herself into something completely different.

What’s great about an actress like KST is she has the ability and the craftsmanship to go anywhere at any given time so we spent a lot of time in prep making the character organic and designing her. Once we started, she was like in complete Crystal mode. A lot of that for an actress involves this physical transformation and that’s why it was so important for her to completely transform every part of her body for this character whether it was the tanning of her skin, to her nails, to her hair, to her makeup, her wardrobe, that’s how they really transform. The dragon had revealed itself.