All The King’s Men: Penny Lane on Our Nixon 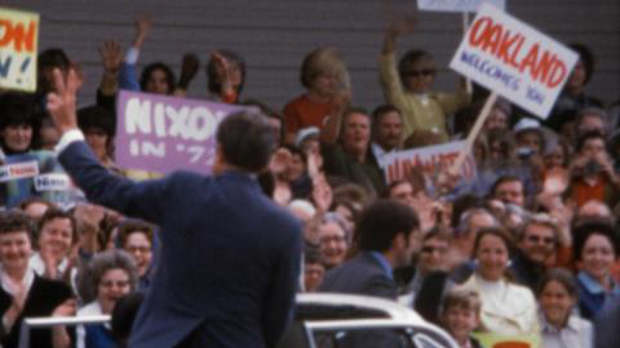 by Brandon Harris
in Directors, Interviews
on Aug 31, 2013

In Our Nixon, director Penny Lane explores the Nixon administration by juxtaposing secret White House discussions from the infamous Nixon tapes with incredibly intimate Super 8 footage taken by avid amateur cineastes H.R. “Bob” Haldeman, John Ehrlichmann and Dwight Chapin. The fact that these men also happened to be the chief of staff, special advisor and assistant to our much maligned 37th President is one thing; that they were also three of Nixon’s closest aides and the key conspirators jailed during the aftermath of the Watergate scandal is another entirely. Despite what Ben Stein might say, Our Nixon has little to no polemical value; Lane creates with seemingly no agenda of her own a relentlessly watchable portrait of a White House that is clearly doomed for some time. Indeed as she reveals in our interview below, for some time the idea of skipping the Watergate incident entirely was an idea being floated by her and her collaborators.

Our Nixon leaves us with a sense that these gentlemen governed the country from a place of profound ignorance of themselves. Their inadequate self-awareness, a common occurrence among those too isolated from the realities of the country they’ve been charged with serving, is in keeping with their inability to discern the practices of the henchmen who did the president’s bidding in the dark would sink them all. Despite this, Lane doesn’t seem to be interested in making much political hay; everyone already knows Nixon was at turns insecure and all too assured, shrewd but intellectually uncurious, a bigot with a sentimental side who was ultimately too detail-oriented for his own good, and that’s all confirmed here.

Our Nixon world premiered at this year’s International Film Festival Rotterdam before making its North American premiere as the Closing Night Film at this year’s New Directors/New Films. It has been purchased by CNN and was broadcast nationally last month. Cinedigm opens it at New York’s IFC Center this weekend. Filmmaker: Did you have much of an interest in Nixon, or the period that he reigned during, before embarking on this project?

Lane: I didn’t have much of an interest in him at all. I knew about the same amount about him as any regular college-educated American knows. Which is to say not much, I guess, except the major points. I had heard of Haldeman and Ehrlichmann, I had never hard for Chapin. Haldeman and Ehrlichmann, I could have picked them out of a lineup based on those iconic photos from the Watergate hearing, which are what most people would recognize them from. Ehrlichman, in particular, it’s the worst photo of him I’ve ever seen; he looks like a crazed bulldog. If you Google him, you’ll see it. His lower lip is sticking out; it’s this weird photo. So, anyway, I kind of had these demon monster, black-and-white still images in my head of Haldeman and Ehrlichmann. Chapin I’d never heard of.

As far as the period goes, I’d be the first person to say that we’ve spent far too much time talking about the late ’60s and early ’70s. The baby-boomer generation has been in charge of all the media for a long time and we’ve heard a lot about how it was “the most important thing that ever happened,” and I’d be the last person to ever say it’d be a really cool idea to do it again. It was finding this footage and having this feeling despite that, “Have we not talked about the Nixon Presidency enough, have we not talked about the hippies enough?”, looking at those home movies just felt different, it felt like something we hadn’t seen before. So that was the initial spark. “Does this feel new and fresh and different?” We thought it did so we followed that trail.

Filmmaker: When did you first hear about this footage and when did making a found footage film out of it begin to seem like a reality?

Lane: I first heard about it from Brian (L. Frye, the film’s co-producer). Brian first heard about it 11 years ago. So he had known about it for a long time, he wrote about an article for Cineaste about the home movies a long time ago and had always wanted to do something with them but had never quite done it. When he told me about them, we decided very early on that it was something that might meld our very different talents together well. We had different backgrounds in film and we thought if we were going to do something together it might be something like this. It became a reality when we spent $18,000 to get the copies made of the footage made so that we could actually see them; we had to spend $18,000 before we saw any of the footage. And then we still didn’t know. We thought we’d made a super opaque avant-garde film. We had very open minds about what would come out of that $18,000 investment.

Filmmaker: That’s quite a risk you took.

Lane: It was totally a leap of faith. Neither Brian nor I are particularly, like, wussy [laughs] about taking leaps of faith. It’s just something that we do.

Filmmaker: That’s my pull quote right there! Once you started screening the footage, did any sort of structure or conceit present itself as the best way to go about it? How was what you were imagining before seeing the footage able to conform with the reality of what you had to work with?

Lane: We didn’t even imagine the film before we saw the footage, we just wanted to see what was there and then would let it be what it wanted to be. As soon as we started watching the footage, I think we had what were initially two very conflicting impulses. One was, “Let the film play in the present tense.” Leave the voice of the future out of it. That meant just White House tapes and home movies and anything else that was happening in real time, so maybe news clips, or anything from the moment. That was the first impulse. The second impulse was, “Let’s make it like someone is showing you their home movies.” Like, “Here we are, going down the street, and this is China, and I remember this part,” with that kind of voice of the future looking back. We weren’t open to the second one initially, we wanted everything to be present tense, we didn’t even want to talk about Watergate; we were going to end the movie before Watergate started, the end. That was kind of the initial impulse.

About six or seven months into the edit it was clear that that was a fine film to make, but it wasn’t working for us. We wanted there to be more tension in the film and we were getting a sense from early test screenings that by leaving out the end there were some people who didn’t trust the film because they didn’t trust the filmmakers knew anything about Watergate, as if we didn’t know. Like if we didn’t mention than we didn’t know, like a “kids these days” sort of thing. So eventually we kind of combined those impulses and brought the voice of the future back in in the form of these interviews with these three men later in life, anywhere from 1975 to 2007, those on-camera interviews. That became really important because five times in the film that footage shows up and puts everything that you see unraveling in the present tense into some kind of perspective. That kind of became the structure over time.

Filmmaker: How many cuts do you go through on a project like this? Is your process more or less like any other documentary post-production?

The beautiful thing about our edit was getting Francisco [Bello, co-editor], obviously. We were very lucky early on to get funding from grant money in order to be able to hire an editor. The film would have gotten done without Francisco, it just would have taken a lot longer and it wouldn’t have been as good. It was really great to have someone step in. This is a year into the project. A year into me being the only editor or of Brian and I editing together. Francisco came in and was very helpful. We were in that place where a lot of people end up, which is sort of lost in the details. The things that seem really interesting to you a year into a project are not the things that are interesting to someone who is sitting down to watch your film for the first time. Like, “Well, we have to use this because it references this really obscure thing from this really obscure book!” [laughs] No we don’t have to use that. No one cares, but you. You start making a film for other Nixon experts, in other words, instead of remembering who your audience is and what they don’t know. So Francisco was great to have come in because he didn’t have any background in it at all, he knew about what Brian and I knew when we first started, which is about the first paragraph of Wikipedia-level information. [laughs] That’s about as much info as the average person retains about a so-called well-known subject.

Filmmaker: Did you ever think the film would have the appeal it seems to have generated? It seems like found-footage documentary is sort of a forgotten format within American film, a ghetto all its own if you will, and yet this film and some other recent found-footage docs have gotten a tremendous amount of attention.

Lane: No, I don’t think so. At least the way I operate is, I make the thing I want to put out into the world and I trust that. I trust that if I want to put something into the world, someone else will respond to it. You never really know if you’re going to hit a sort of zeitgeist-y wave or not; if we knew that, we’d only ever make hits. So I just made a film I wanted to make. At some point it starts to become obvious though. When we did our first Kickstarter campaign right away, very early on, we were like, “A lot of people are interested in this.” I think we thought people would think it was just too weird. Nixon home movies, that sounds so weird. All archival, that sounds so weird. I haven’t found that people think it’s so weird. So we lucked out! [laughs]

I think the success of films like Senna or The Black Power Mixtape was really helpful to us. Also The Autobiography of Nicolae Ceausescu, although that film is way more down the avant-garde path than our film. But to some extent the success of those films was really helpful for us. When we sat down to have industry meetings, we no longer had to say it is possible to make an entertaining, accessible film with only archival footage. Initially when we’d take these meetings people would be like, “Is that possible? I don’t know if that’s possible.” As you know, it’s something that’s really well-known in the avant-garde tradition but it’s not as well-known in the documentary tradition. But I think it’s changing. Just in the last year, whether it’s Let the Fire Burn or Teenage. I think it’s changing.