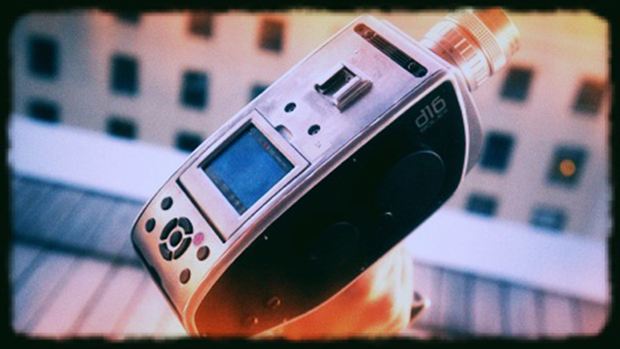 by Michael Murie
in Cinematography, Columns, Filmmaking
on Sep 30, 2013

Elle Schneider, Creative Director at Digital Bolex, spoke about the project at this weekend’s Hacking Arts conference held at MIT’s Media Lab. The Digital Bolex project, the creation of a digital camera that is operated and styled like a 16mm camera, was funded through a Kickstarter Project. Held in March of 2012, the campaign raised twice the $100,000 goal and pre-sold 93 cameras. Schneider announced that they expect the camera will be available to order in six weeks, and they will ship the original orders even sooner.

Schneider, who had an early beta version of the camera with her, talked to us about how she became involved in the project, its goal and current status, and about the operation of the Digital Bolex itself.

Filmmaker: How did you get involved with the Digital Bolex?

Schneider: I was originally hired two years ago when the project was in its conceptual phase to direct commercials and other spots for the camera. When I came on it was envisioned purely as a 16mm equivalent; there were not many frills to it – there was no full video out. It was purposely designed to mimic shooting 16 as closely as possible.

My business partner, Joe Rubinstein, had been a cinematographer for about seven years, and he had shot everything on 16mm. He left his job to pursue other things when digital came along because it just didn’t look and feel the same to him.

Since he was not experienced with the equipment currently available and I’d been shooting almost exclusively on digital, when I came to the project I was able to offer insights that updated his vision of reproducing the feel and look of 16mm into something that was more useable to people who have grown up only shooting digital.

Filmmaker: What stage is the project at right now?

Schneider: We’re beta testing cameras. We’ve released a lot of test footage, we have some DPs who have shot with it and we have more that will be shooting with it soon.

Our plan is to be shipping next month. Right now we’re down to the nitty-gritty details of shipping, ike when do the box proofs come in? And did we spell check everything in the manual? We have all our parts on order and as soon as 100% of them have arrived we will be assembling and shipping cameras.

Filmmaker: Once the pre-orders are shipped, you’ll be selling to the public?

Schneider: We’ll be doing domestic direct sales in about six weeks, and then we hope to be selling internationally next year.

We’ve had offers for retail distribution, but right now we’re not producing the volumes that would sustain that. We don’t want to be a company that is constantly on back order. We believe that next year we’ll be ramped up to a point where we could be doing retail. 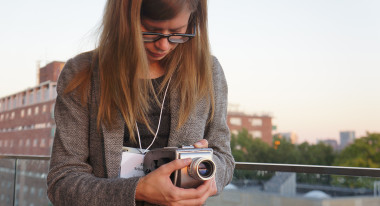 Filmmaker: What will be the retail price?

Schneider: The base model is going to be $3,299. We may offer one that has an upgraded hard drive, because it is an enterprise class SSD inside the camera that’s the recording medium. We’ve heard of people who have had problems with SSDs because if you’re not using a fast enough drive you can get skipping. It’s a lot of data with the images coming off this camera in RAW. Even expensive consumer-level drives sometimes don’t work properly, so we want to use the best SSD’s out there.

Filmmaker: How have you been testing the camera?

Schneider: We’re at the stage where we’re trying to break it. We’ve taken it on rollercoasters, we’ve taken it out in the desert in 107-degree temperatures, and we’re really trying to put it through what filmmakers will use it for so that we have covered the spectrum of possible problems that might arise while shooting.

Filmmaker: Is the operation of this camera different from existing DSLRs and video cameras?

For a DSLR shooter it actually fixes a lot of problems, like a thing as simple as being able to check your focus while you’re shooting is something that DSLRs don’t let you do. As a documentary DP that’s infuriating because if you sit somebody down in a chair and you focus on them, and then they lean forward, you can try to adjust on the fly based on the LCD, but if you can’t zoom in and check your focus, you’ve got no idea what you’ve got until you put it on the computer.

We have XLR audio with phantom power so you can put real mics into the camera and get clean audio, so you don’t have to be dragging a Zoom or a Tascam around. We have 4-pin XLR power-in so you can use a battery belt or a Switronix battery that will power the camera for 12 hours. We also have a power-out so if you have an EVF everything can be powered by one harmonious system.

Filmmaker: The EVF is connected via HDMI?

Schneider: Yes it’s HDMI, and we’re building an HD-SDI unit that will go underneath the camera if you need it. That’ll be an add-on.

Filmmaker: Can you explain the controls and connections on the camera? 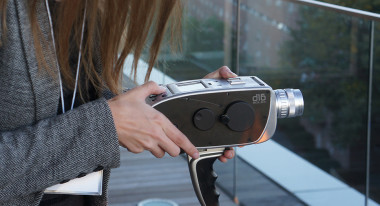 Prototype camera; note that the colors of the production camera are reversed

Schneider: On the left side you have the XLR inputs, power-in, power-out, HDMI, headphone jack and video jack and a cold shoe. On the top, another cold shoe, two screw holes for our loop and also for mounting accessories, LCD panel, navigation controls, Record, Power, Display (that cycles through different display options), and a Menu button which you use to select and adjust things: format your cards, format your SSD, change display settings, etc. You also have Up/Down buttons that allow you, while you’re shooting, to check your focus.

On the right side we have the line mic level controls for the XLRs, and we have two cranks. The cranks are experimental controllers that you can assign to different functions; if you go into the menu you can set crank 1 and 2 to be shutter angle or your ISO or brightness for the monitor.

Filmmaker: It has an internal battery?

Schneider: It has an internal three-hour battery, though we assume most people will be using it with an external battery.

Filmmaker: And the recording is to an internal SSD? How big is it?

Schneider: It records to an internal SSD, and then if you choose to, it will dump to the dual CF cards or you can offload via USB 3. It’s 400 GBs, and that gives you about 80 minutes of footage. It breaks down to about 5 GBs per minute.

Filmmaker: I don’t think many people think, “I’m going to make a camera.” How did that process go. Was it what you imagined?

Schneider: To me it seemed natural only because I had been frustrated for a really long time that I was never quite able to get the look that I wanted with the cameras that were available to me. I felt that the closest I had come was with the Panasonic DVX100. Even though it was SD, it was a camera I could really control, and I really understood how every aspect of it worked. With DSLRs I always felt like there was some kind of weird problem or information loss, and it was hard for me to predict what information would be lost and what wouldn’t.

When Joe approached me about the project, one of the things that we connected on was having RAW files that can really record a ton of latitude. It makes sense why it went away ten years ago because you didn’t have the hard drive space for it and maybe the chips and the sensors were not quite there to produce a great quality image, but that’s changing now.

Hard drive space is really not terribly expensive and why compress your footage, why handicap yourself by compressing when you now have the ability to record something in RAW? When you have RAW files your footage is as good as the algorithm that you’re debayering it with. Which means that as debayering algorithms get better, the footage that comes off of this could be improved in the future. If you record something in H.264, it’s H.264 forever and there’s nothing that you can do about that.

So as weird as it is to say “I’m going to make a camera and I’m going to put it out there,” for me it was about making a camera that just wasn’t represented in the market.