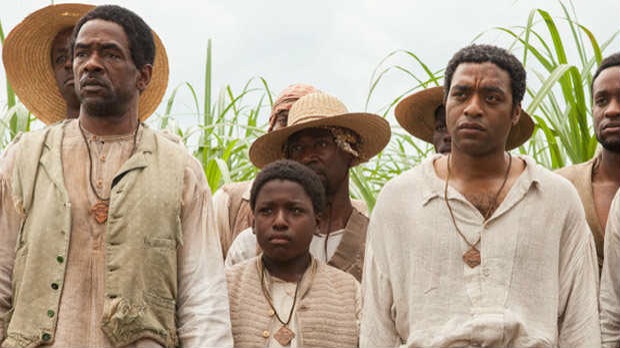 A substantial majority of the New York Film Festival slate is traditionally reserved for established auteurs and big-buzz festival titles. It might be better for adventurous film culture if NYFF and Cannes were to ditch the ballast of already established directors in favor of new and uncharted terrain, but that’s simply never going to happen and to protest otherwise is an unrealistic waste of time. (For those in the press corps, it’s also fun to bang through a dozen of the Year’s Most Important Releases in rapid sequence.) The U.S. premiere of Steve McQueen’s much-praised 12 Years A Slave may have seemed inevitable, especially since the director was here two years ago with his stupidly portentous Shame, which applied the same level of gloomy solemnity to the tale of a well-off Manhattan sex addict as Hunger did to Bobby Sands’ hunger strike. McQueen seemed in danger of having only one register to work with, a man with a fine eye and no sense of dramatic proportion, whose movies could be rotely described as “powerful,” sight unseen.

Given 12 Years A Slave’s subject matter, it’s a welcome surprise that John Ridley’s script pushes McQueen to prove he can proficiently execute multiple tones. Dexterity is necessary to handle adaptation of Solomon Northup’s slave narrative, which is a sort of ghastly picaresque featuring Northup (Chiwetel Ejiofor) as an innocent continuously abused in various settings. The first shot gives audiences exactly what they might expect: “All right, y’all fresh niggers,” an overseer drawls before demonstrating how to strip sugar cane. Solomon and his fellow slaves get to work and the camera pushes its way through the field to join them in the cut-down center, brushing aside stalks in its way as if in laboring solidarity.

How Solomon got here is a briefly told tale: the violinist was lured to D.C. for a gig by two circus men, one of whom says his traveling show boasts “creatures from darkest Africa as yet unseen by civilized man.” Best to be on one’s guard when a white man slips straight into that kind of colonialist cliché without apology, but Solomon takes their drinks without blinking, passes up and wakes up chained in a dark basement. There’s a pointed crane up from his dungeon to a bird’s eye view of the White House within shouting distance. Washington, D.C., is a particularly stark example of how the United States’ infamous incarceration rates disproportionately affect black people: 50.1% of the district’s population according to the 2012 census, but making up 91% of its inmates in June. That crane shot directly connects this country’s overblown prison business with executive policy, and it’s one of many indications that 12 Years is up to more than simply rendering The Horrors Of Slavery at a safe distance for everyone to shiver blamelessly at.

The subject is, among other things, structural racism, in which institutional practices make everyone complicit in a greater ill without the possibility of identifying actors whose removal would lead to justice. Solomon’s first sold to the as-benevolent-as-possible William Ford (Benedict Cumberbatch), whose wife tries to comfort Eliza (Adepero Oduye) over being separated from her son and daughter with the ill-chosen “your children will soon be forgotten.” Solomon defends Ford as being a good man “under the circumstances,” but Eliza’s not having it: “under the circumstances, he’s a slaver.”

Solomon’s passage south on a steamboat is rendered with There Will Be Blood’s percussive verve, with Hans Zimmer’s blaring score (those gargantuan Inception horns still intact) getting even more of a strong beat from a shovel scraping against the ship floor while shoveling coal or the hard thwack of the paddlewheel hitting the water on the twos and fours. As my colleague Steven Boone observed, this part of the movie’s a “good horror show,” one of the many idiomatic shifts here. Ford’s paternalistic benevolence is pragmatically preferable to the outright sadism of Solomon’s next owner Edwin Epps (McQueen regular Michael Fassbender), whose “relationship” (choice doesn’t enter into it) with slave Patsey (Lupita Nyong’o) provokes the jealousy of glowering wife Mary (Sarah Paulson) (“my bed is too holy for you to share”). The Epps plantation’s flirting-with-camp sexual dynamics is (intentionally?) close to Richard Fleischer’s Mandingo, which did its best to illuminate the infamous mixture by making sexual objectification as prominent an aspect of the infamous institution as lashings and labor.

When it’s time for brutalizing violence, McQueen doesn’t shirk. With comfortably settled images of slavery long in the national imagination, it’s important to make sure this isn’t high school classroom-friendly stuff. McQueen doesn’t lose his compositional nerve even when you’d expect him to: there’s a shot of Northrop walking through the woods, the abruptly hoisted bodies of two lynched black men providing compositional background balance to his striding away in the foreground. It’s probably no coincidence producer Brad Pitt gets the plum, likably righteous role of Samuel Bass, a Canadian who gets off a good speech about slavery’s evils (Pitt nails it, to his credit): this is still filmmaking compromised to suit various parties’ needs, not some kind of pure holy text. There are overemphatic missteps (is it really necessary to overlay pathos-laden strings over Solomon and other black musicians playing for mask-wearing white people?), but 12 Years is much better than “powerful.” Whether it actually works to polemically link past and present in either thoughtful or galvanizing ways is unclear to me, but as a briskly overstuffed narrative it’s aces, ending with the affecting, universal image of a traumatized traveler unexpectedly delivered home, as yet unable to process what’s happened.

The conversation about Abdellatif Kechiche’s Blue Is the Warmest Color has been dominated by a few unproductive talking points. Initial Cannes chatter focused on whether the sex scenes were just the work of a porn-y “male gaze” slavering over Hot Lesbo Sex (pretty much every combination of sexual orientation and gender has weighed in at this point without consensus being reached). Discussion has since transitioned to many news posts about whether Kechiche is a monster tyrant to cast and crew alike. I’m not terribly interested in Kechiche’s means, objectionable or otherwise: John Frankenheimer liked to fire a gun mid-take to get a reaction, but he’s not been judged as one of history’s greatest monsters.

I am interested in results, and to these eyes Blue is (that double-edged damning word) “watchable” but psychologically incoherent. Adèle (Adèle Exarchopoulos) meets the older Emma (Léa Seydoux), their relationship unfolding one unusually prolonged interpersonal interaction at a time in lots of extreme close-ups (what he feels he needs widescreen for is unclear). The performers are pretty flawless, especially Exarchopoulos, who has a way of seemingly not registering any statement made to her before suddenly pulling a face or breaking into deadpan dancing. But these setpieces never really establish any kind of inner life to Adèle and Emma’s standard rise and fall: first there’s passion and fire, then the setting in of creeping dissatisfaction, the suspicion of infidelity and a violent wrenching fight that leads to the relationship’s dissolution.

There are three sex scenes, and given how long the first goes on (and how little variation there is between the three) they’re more than doubly redundant. We’re given to understand that Adèle is voracious because someone tells her “you’re voracious” and she spends so many scenes eating you feel terrible for the  actress, who surely found swallowing all those gyros and spaghetti for multiple takes as tough as any of Kechiche’s tantrums. Points are triple-underlined throughout (Adèle can’t just meet Emma after first glimpsing her on the street, she has to have a long conversation about the possibility of predestination first), but given the amount of time expended on each scene it’s hard to understand anything about the relationship except that it involves sex. It’s hinted that Adèle feels insecure around Emma’s artistically minded friends and doesn’t like being told she should write or pursue something creative, but getting from there to screaming “I WANT YOU TO GO” stand-offs is a matter of rote inevitability. Blue‘s a well-acted plot outline lacking sexual or psychological specificity, exactly  the details needed to make the well-trod beats of a relationship drama work.

Finally there’s the remarkably inconsistent Hirokazu Kore-eda, whose Like Father, Like Son begins by quoting his 1998 personal best After Life. There, the newly dead were asked to begin their stay in bureaucratic purgatory by giving their name and date of birth to a social worker: here Ryota (Fukuyama Masaharu), wife Midori (Ono Machiko) and six-year-old Keita (Keita Ninomiya) providing the same information to an offscreen interlocutor. It’s a pre-school audition, it seems, and the family’s disciplined responses are part and parcelof Ryota’s disciplined vision for Keita. “We’ve done what we could,” he says of the serious homework/piano lesson/low cholesterol regime the kid’s already on. “The rest is up to Keita.”

Once Ryota and Midori subsequently find out their child was switched at birth in the hospital, the bulk of the narrative follows them as they struggle about whether to switch biological kids with the other family concerned. As in I Wish and Still Walking, Kore-eda has a weakness for banally genteel classical music on the soundtrack, which in this case includes Glenn Gould’s 1981 re-recording of the “Goldberg Variations.” In this context, Kore-eda threatens to turn Gould’s decidedly eccentric, slowed-down second pass into so much background “life is sad but beautiful” nudging. There’s one stab of anger when Bach’s music interrupted by Ryota’s fist making disruptive contact with a car window, but most of the movie is oddly fixated on bad dad’s growing sense that he’s a no-fun disciplinarian repeating his father’s mistakes by  not being there. The overall message (don’t work so much and fly a kite with your kid) isn’t that far off from the usual Hollywood family film guilt-tripping of absent fathers.