“FOR THE LOVE OF MOVIES”‘ GERALD PEARY By Alicia Van Couvering 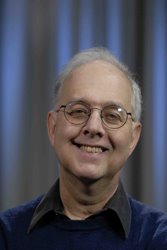 Gerald Peary is not a cell phone person. He has witnessed a quarter century of films and criticism, from when Pauline Kael and Andrew Sarris drew their lines in the critical sand to the currently expanding blogosphere. Gerald Peary is old school.
A working film critic for 25 years, his work has appeared in The Los Angeles Times, The Toronto Globe and Mail, The Chicago Tribune, Film Comment, Cineaste, Sight and Sound and Positif, to name a few. He is the weekly reviewer for the Boston Phoenix, one of a rapidly diminishing club of alternative weeklies as paper after paper fires their local critics and relies on a small cadre of nationally syndicated reviewers. This is the “crisis of criticism,” as Peary calls it, but his new film isn’t only about the crisis. For the Love of Movies: The Story of American Film Criticism is a tender and detailed documentary spanning the art form’s beginnings, middle, present and future. Interviews with print critics like Roger Ebert, Elvis Mitchell, A.O. Scott, Lisa Schwartzbaum, Kenneth Turan, plus bloggers like Karina Longworth and Harry Knowles mingle with classic film clips and voice over by Patricia Clarkson. From the pitfalls of trying to have a relationship with a non-critic to an expose of “junket whores,” reviewers who sell their movie poster blurbs for studio-sponsored hotel suites at foreign festivals, Peary is a man compelled by love, telling the story he knows best.

FILMMAKER: Do you ever blog?

PEARY: No, no, never, no. Never blogged in my life, no. I’m a print person, I mostly read newspapers and magazines. But I’m learning. Here at SXSW, so many people that I respect are doing blogs that I’m considering a change in my habits. I read books. Remember them?

PEARY: Yes, that’s where you can find them.

FILMMAKER:Do you feel that technology has changed criticism?

PEARY: The people I know are like me, old print critics. But they’ve been taking me through how their lives have totally changed doing all these things. [Here at SXSW I’ve seen] Sean Levy, for instance, who has been the print critic for the Oregonian for years. He’s now twittering and doing blogs every day, and he told me that his life is divided into these three personalities. But what’s really interesting to me is that he actually enjoys blogging and twittering.

FILMMAKER: I feel like that form of publishing is much more about opinion than criticism. What do you think the difference is?

PEARY: We actually had a big discussion on my panel here about the difference between criticism and opinion. Scott Weinberg, who’s an eminent web critic, kept talking about the “opinions” of reviews, and I kept interrupting — to me the opinion is the least interesting part of the review. Whether you like the movie or don’t like the movie, that’s the consumer part, and that’s what reviewers do. But a critic is much more interested in contextualizing the film and educating the audience. Criticism is about relating the film to the other arts, to literature, to politics; knowing about the director’s career.

FILMMAKER:Do you feel like you personally have a specific critical point of view? Like Armond White, for instance, writes from a race and class-conscious, highly-politicized point of view… did you ever pinpoint where you were coming from?

PEARY: Everybody’s criticism is subjective. Armond is somebody who’s subjectivity is glaring, is madly subjective. He’s a crazy, wonderful writer – when I agree with him, he’s the best, and when I don’t, I don’t know what he’s talking about. It would be really boring if every review you just had a rote opinion that you just plug into everything, that would be like being a communist critic or something. I guess I’m somewhere left-of-center, a critic who considers the meaning of films and the responsibility of cinema. At the same time I’m interested in feminism and women’s rights. I’m aware of the Hollywood factory and I feel alien from Hollywood today, which is just total cynicism as far as I’m concerned. I’m interested in transgressive cinema and cinema that challenges what I believe.

FILMMAKER: Why did you decide to make this film?

PEARY: It started about nine years ago. I had a friend, Ron Mann, who’s a Toronto documentarian that I worked with. He told me, “You should make your own film,” and volunteered to be the executive producer of something I would direct. We met in a cafeteria and I said, “I would like to make a film about barbecue. I love eating barbecue and I love all the crazy stories of the people who make it.” He said, “Oh I don’t know… you know all the film critics, why don’t you make a film about film criticism?” I was skeptical and a little disappointed. I told him, film critics don’t do anything — we’re going to film people typing at their computer and coming in and out of a movie theatre? But somehow we decided to do it, and later my wife Amy Gellar came on as producer. So we’ve been trying to raise the money and to figure out what the story is, what the structure is, and figure out ways to tell it that are cinematic. We found this way to weave some very good talking heads of critics saying wonderful, interesting things, with film clips, and also film critic’s anecdotal stories about the first movies they saw and how they got to be critics.

FILMMAKER: I want to talk about the Pauline Kael / Andrew Sarris feud, which is given a great look in your film. What is your personal allegiance?

PEARY: What do you think? Could you guess?

FILMMAKER: I would guess that you came down with Kael?

PEARY: Oh good, I’m glad you said that, because I actually am up with Sarris first.

FILMMAKER: Really? You know that makes sense. I take it back.

PEARY: It’s sort of a generational thing. I lived in New York when the Village Voice was the greatest paper in the world and Molly Haskell was writing a feminist column. One of first Americans who died of AIDS, Stuart Byron, came out in the paper and talked about getting his wallet stolen while getting a blowjob; that was part of his review. I just thought, wow, this is great. I read Sarris’ book American Cinema, and that’s how I grew up. Then Kael came along, and I loved her first book — although I’m not a Paulette, the two times I met her she was very, very nice to me.

FILMMAKER: What was the difference between their two perspectives?

PEARY: There are strange similarities, except a very different style of writing. It’s so weird to consider now that what they were doing, which was choosing the most important directors, that those choices could anger you so much. John Ford means nothing to Pauline’s crowd and was the center figure for the Sarrisites; people like Steven Speilberg was a central figure for Pauline’s people and means nothing to the Sarris group. But for the movie it’s just too complicated issue to go through each director and catalogue them to one critic or another.

FILMMAKER: Have you seen critical styles change, or the job itself?

PEARY: The main change is that you have to write shorter and shorter and shorter. The Boston Phoenix, where I work, used to four or five 2,000 word reviews. Now we have tiny little blurb review, because the entire paper has shrunk. My paper is privately owned and just trying to stay afloat any way it can, and making smaller reviews is unfortunately part of what [the publisher] needs to do. I do sympathize. There are a lot of really good critics right now. The crisis in criticism is not about the quality.

FILMMAKER: What is the crisis of criticism?

PEARY: Simply that if you are a print critic you are in danger of losing your job at any moment. Newspapers are dropping dead, and it seems like film critics are a particular target. The film begins by saying “there are 24 critics who have lost their jobs in the last several years,” and since we finished the film, many more have lost their jobs. A lot of people are identified with a title of ex-critic, but they were not “ex” when we filmed them just a few years ago. You can work on the web, but if you do that you’re not getting paid much, or at all. And critics should be paid — this isn’t an amateur thing to do, it’s not like Sunday painting.

FILMMAKER: How did you pick which critics to interview?

PEARY: Well, when we started with Ron as executive producer, we had more money, as he was funding it. So we started out very purposefully: we went to New York to film some people in their apartments, and then we went to Chicago to film some critics there. Then later in the process, we had no money, so we developed a kamikaze style. I would be in a place where there were critics, and when one walked by, I would corner them. So it’s a bit arbitrary who is in the movie. Some of those critics have complained and asked why they’re not in the movie, — I have to say, “it’s just that you weren’t standing there when we had the camera!”

FILMMAKER:Were there other things you couldn’t keep in the movie?

PEARY: Oh, thousands of things. So many wonderful things. John Waters talking about his favorite critic, this crazy gay critic named Parker Tyler, who wrote in the 1940’s and who John Waters called on the phone before he died. We found out that in Chicago there was a boot camp for the summer teaching little kids how to be critics, so we went to Chicago and filmed all these six and seven-year-olds writing film reviews… but it couldn’t stay in. That’s for the DVD.

FILMMAKER: Have you ever looked back on reviews and disagreed with yourself?

PEARY: Oh, sure. Films change and you change. That would be completely absurd if you had the same ideas decades later. The first David Lynch film, Eraserhead, I gave a one star review. I thought it was utterly stupid. I saw it again a couple of years ago and now I think it’s a great movie.