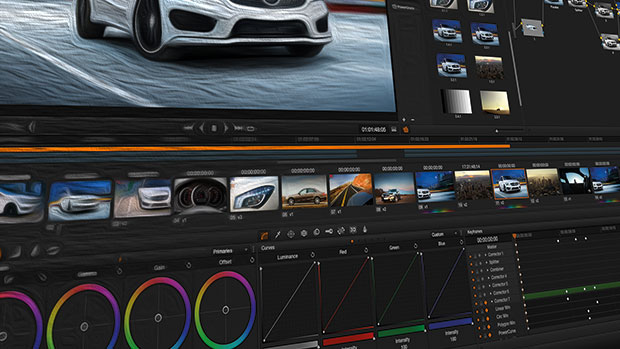 by Michael Murie
in Filmmaking, Post-Production
on Nov 25, 2013

DaVinci Resolve began life as a high-end grading tool found in expensive color suites. Its purchase by Blackmagic hasn’t lessened its sophistication – they’ve continued to expand its tool set – but it has seen the software’s price lowered substantially, a free “lite” version released, and a redesign of its UI that has made it a lot friendlier to new users. Resolve is still a complicated and sophisticated tool, and color grading is a skill that can take a lot of study to master, but if you’re doing any image manipulation to your footage you shouldn’t ignore the functionality Resolve offers.

The following is not a review of this release – I’m far from competent to review this product. But this release is a significant upgrade, and Blackmagic Senior Regional Manager for North America, Bob Caniglia, provided us with some perspective on the new features.

When Resolve 9 was released the interface was completely redesigned to, in Caniglia’s words, “free up space and give us a better framework for moving forward with the software.” According to Caniglia, with the redesign completed in release 9 they were now able to focus development efforts for release 10 on features, adding “over 100 new features.” The most significant of these are in editing, audio handling, round-tripping with other NLEs, improved noise reduction (this feature is in the full version only) and a new “Live” function.

Round-tripping
Resolve was always a color-grading tool, and it was originally expected that the editing would be done in an NLE. However the communication between the NLE and Resolve wasn’t always as painless as you might like, often requiring that the edit be flattened into a single track before it could be sent to Resolve. This release improves support for XMLs, AAFs and EDLs from Avid, Adobe Premiere, and Apple Final Cut 10 and 7, making transport between Resolve and the NLE much more seamless. Says Caniglia, “Even if editors are working on the same project in different platforms, we can combine them so that they can be read by Resolve as one timeline and then passed back out to any or all of the other applications so that everyone can read the same project.” 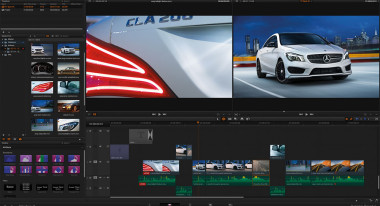 Editing
According to Caniglia, most of the early colorists came up from the film side and had no interest in editing. But now Blackmagic is finding that the newer colorists have some editing background and for small changes “would like to just finish a project in Resolve rather than have to go back to the NLE.” This release recognizes this demand by adding clip trimming, three and four point editing, multiple-take selections, optical flow and image processing for speed-ups and slow downs, support for third-party plug-ins, and a character generator for lower-thirds, scrolls, crawls, and basic titling.

Blackmagic is also positioning Resolve as an on-set tool for live grading, as well as a tool for the production of dailies. For that market the addition of editing tools, and titling and burn-in options makes sense. “People often use Resolve to do conversions of files formats to make proxies – low-res versions of whatever camera file they are using,” says Caniglia. “You can do a conversion to the format that you need and also edit together the dailies in the order you need, because often times what we’re hearing is that the director wants the dailies in a certain order but producers want them in a different order, and editors want then in a third order.”

Audio
Previously, audio support in Resolve was basic; it was expected that you’d import a single WAV file to play along with the video, but you weren’t actually expected to edit audio in Resolve. With release 10, that’s starting to change. This release adds multi-layer audio editing capabilities. Again, Caniglia sees this as a function that will be primarily of interest in producing dailies where a different audio track might be used depending upon who is getting the file. “I think a lot of times in grading, you just want to be able to move different audio cuts around so you can monitor as needed rather than just stick to a single stereo pair.”

Noise Reduction
Taking a feature from their Revival film restoration tool, Blackmagic has added temporal noise reduction in this release. This is in addition to the existing spatial noise reduction and dirt and dust tools that had previously been added. Noise reduction has been improved and depending upon the number of GPUs that you have, works in real time. They have also increased motion blurs and enhanced blur effects so that the range is 10 times larger than it was. Note that these features are not in the Lite version.

Live
The new Resolve Live feature adds the ability to do live grading on-set. A live feed can be sent to Resolve from the set and an image grabbed and graded and sent back out to the set so that they can tell whether or not the lighting and the composition is working. The stills could also be saved and sent on to the finishing company.

The Lite version
The free version of Resolve has most of the features found in the full version, but lacks 3D tools, noise reduction, DCI 4K support, and is limited to one GPU. The Lite version does support resolutions up to UltraHD.

The Lite version also does not support a shared database or shared projects, and doesn’t support remote grading where a colorist can control one system from another location.

If you’ve never looked at Resolve before, then you should at least download the Lite version and give it a try. If you tried Resolve prior to version 9 and found the interface overwhelming, then you should give it another look. You might like what you find.