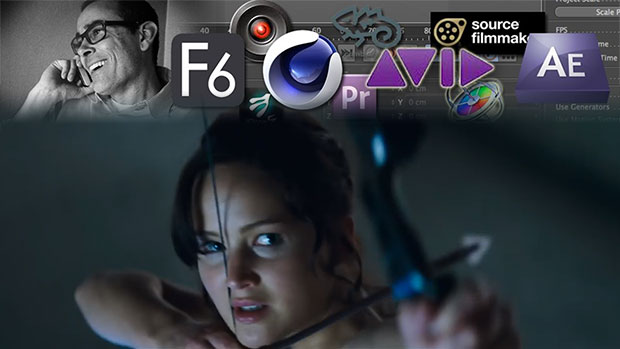 by Michael Murie
in Editors, Filmmaking, Interviews, Post-Production
on Dec 1, 2013

The day before its release, Alan Edward Bell A.C.E., the editor of The Hunger Games: Catching Fire, as well as The Amazing Spider-Man and 500 Days of Summer talked about his career and his editing philosophy at a meeting of the Boston Creative Pro User Group.

Born and raised in Los Angeles, Bell’s father worked in the film industry, and Bell was sure he didn’t want to do that; he wanted to be a rock climber. He became, he said, pretty good at it. But to pay rent he took people out rock climbing, and most of them were from the industry and they were all very stressed out. He couldn’t understand it, but a friend who worked in the industry got him in to watch Robert Leighton edit a scene from The Princess Bride. “I’m looking at that and I’m thinking ‘that looks easy, I could do this,’ and I told them that and they laughed.”

Bell said that when he decided rock climbing wasn’t going to be his permanent profession he ended up getting a job on a very low budget movie and then became an apprentice editor to Norman Hollyn.

His philosophy, he said, is, “I believe that editing is a craft and it can be learned, and the only way you can learn it is by doing it.” He also says that editing is a service industry, and in a competitive industry you have to set yourself apart. “I’m in service of the story, of the characters, of the director, of the studio, of the audience, and of myself. I need to develop skills that allow me to do that and set myself apart from the competition.”

As a group he said that editors are the least open to change, which is a surprise given they are tasked with making changes all day long. This was particularly his experience in the transition from film to digital.

As he progressed he realized that there was a way to distinguish himself with the new digital tools, and that there were a subset of tools that weren’t being embraced by other editors; tools like Photoshop, After Effects and Combustion.

By becoming proficient with those tools he was able to start changing the performance. “At the beginning I was concerned about matching, but it’s all about the performance. I’m looking for the best possible performance. I don’t care if it doesn’t match, I’ll find a way to make it match later.” By doing comparatively simple things – taking a face from one take to another, or cutting out a hand that’s in the wrong place – he found he was able to save a good performance that otherwise would have been lost. He was also able to save time and money, and improve the performances. “As an editor, what I’m striving to do is to get you to feel something,” he says.

Though he doesn’t do true VFX work, he explained that his ability to make changes in-the-edit to the performance has been invaluable both for low-budget movies as well as the bigger movies he’s worked on.

In the Q&A session Bell talked briefly about working with studios and how he deals with studio notes. He said that he thinks most successful editors and directors don’t complain about studio notes. “Most people, studio executives included, want to make a good film. You don’t belong in Hollywood if you don’t want to be a collaborator. The studios are the ones paying for all this. Sometimes a note doesn’t make sense. If it doesn’t make sense it’s probably because that person was unable to articulate clearly what they were feeling at the time. The best directors take a note, find out what the intent of that note is, find out where it is coming from, what’s underneath it and actually service the note, maybe not to the letter of the note, but in a way that helps the film.”