Anchorman 2: The Wolf in Sheep’s Clothing (It’s not DiCaprio) 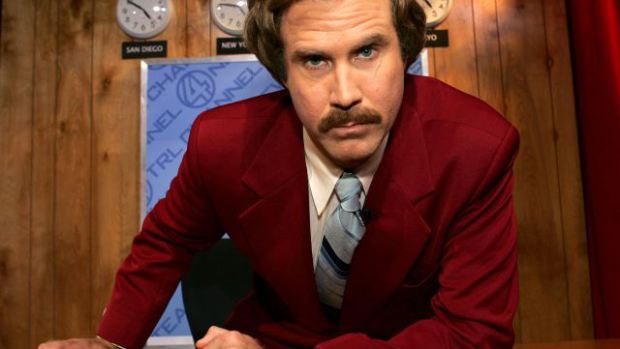 Anchorman 2 is the best movie of 2013. In a year when I often left the theater wondering what the hell the the critics were talking about (All Is Lost, American Hustle, 12 Years A Slave, Nebraska, Inside Llewyn Davis) here is a movie that is fun, deep, irreverent, and political.

“Political” is the biggest surprise. Will Ferrell has made a career of not being political and not saying anything. He’s leaned towards the Jay Leno school of comedy a lot more than the Lenny Bruce school. Who else but Will Ferrell would come out with a comedy special on George W. Bush AFTER Bush was President? When Bush was no longer in office, ruining the country and the world as much as any president ever has. And even then, Ferrell’s special on Bush was a softball pitch. Not scathing at all. Easy, harmless, middle of the road jokes about Bush’s lack of brainpower. Not scathing, not angry, not outraged or subversive. His work on SNL about W. was similarly mild and meek. If Saturday Night Live isn’t going to rip George W. Bush a new asshole when he invents wars and kills our kids for Texas oil, should it really still be called Saturday Night Live? Belushi must be spinning.

And yet, against all odds, Anchorman 2 comes to us with sharp teeth and a bite. The first Anchorman movie was one note, one joke, a skit stretched into a movie, and completely apolitical. It was a typical Will Ferrell movie, perfectly hitting it’s target audience of sport frat boys. But Anchorman 2 is about how far America has fallen. It turns on the football frat boys, gives them the finger. It’s about the fascism of Fox News and how patriotism is the last refuge to which a scoundrel clings. It’s about the dumbing down of media into pure sensationalism. It’s about the one percent controlling the information that the 99 percent gets. I’d love to see Anchorman 2 on a bill with Ace In The Hole and Network and Citizen Kane. It would fit in nicely.

That Anchorman 2 is being advertised thru loads of car commercials and other big brands is a brilliant extension of the subversiveness of the film itself. Did any of the ad people at Dodge watch the actual movie? Or has Ferrell been such a good, mundane American citizen for so long that they just gave him the benefit of the doubt? At any rate, it’s genius. A movie about how big companies are killing us, advertised by big companies. This is the stuff of dissidents and troublemakers. It’s good mischief, it’s stealth, and it’s courageous. The movie is all those things too. It mixes trippy irreverence with a renegade spirit, and they mix beautifully. An endless scene, that had me crying in laughter, about being blind in a light tower, somehow blends perfectly with talking about the extreme dangers of corporate synergy.

In a movie landscape where most films are pretending to be more than they are, here’s one that is pretending to be less. You can go see Steve McQueen’s pretty slave film, or Redford’s plastic-faced Patagonia ad, or The Coen Brothers’ sad attempt at being as mysterious as Bob Dylan, but if you wanna see something really fun, really smart, really soulful and hip and badass, check out Anchorman 2. Or, to put it bluntly: American Hustle is a Saturday Night Live skit disguised as a great movie. Anchorman 2 is a great movie disguised as an SNL skit. Cool.