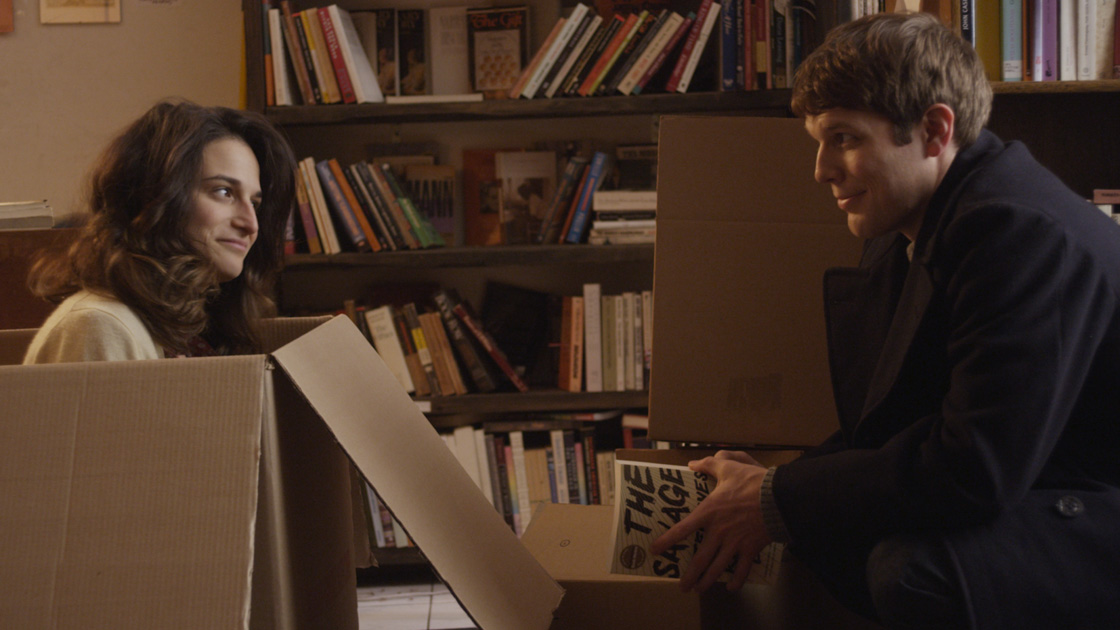 For her debut feature, director Gillian Robespierre has done the somewhat unlikely and crafted a warm, winning, genuinely funny romantic comedy that, oh yeah, is centered around an abortion. The story of Donna (the always charming Jenny Slate), a young comedian who, after a bad breakup and an alcohol-fueled one-night stand, finds herself pregnant, Obvious Child offers a refreshingly frank, true-to-life portrait of a woman dealing with an impending abortion. But the film is a lot more than just a comedy built around a hot-button issue – it’s an earnest, lived-in, and warm rom-com about navigating one’s aimless 20s, and the blossoming of two promising young comedic voices in Robespierre and Slate.

Filmmaker: It’s refreshing to see a comedy where most of the comedy is coming from a female character who is allowed to have real sense of humor (and sometimes quite an offbeat one at that). Can you talk about creating Donna’s character, and zeroing in on her voice?

Robespierre: I would be as bold as to say that Donna Stern played by the devastatingly funny and beautiful, Jenny Slate is not considered the “typical Hollywood” leading lady character. Usually the most relatable female character with the wittiest sense of humor and most interesting face in movies is relegated to the best friend role, and I often wish those movies were actually about them.

When creating Donna’s character I was very interested in deconstructing how a leading woman in a romantic comedy is supposed to look and sound while staying true to that genre of storytelling. Creating the voice of Donna was a collaborative effort with the exceptionally funny and intelligent women Anna Bean, Karen Maine, Elisabeth Holm and Jenny Slate. We all have similar senses of humor, devour the same movies, and crave what all intelligent women crave, a romantic comedy that is Actually Funny. Donna has pieces of all of us, but most of all she’s a real person who feels and does real things in the real world. We weren’t afraid to borrow experiences and feelings from our own lives but more than that we weren’t afraid to show a character that has many sides.

Filmmaker: Jenny Slate gives a wonderfully committed and endearing performance. At what point did she come on board the project, and how involved was she in crafting Donna’s character?

Robespierre: Jenny has been on board since we made Obvious Child the short in the winter of 2009. On a chilly fall evening in Brooklyn, my co-creator Anna Bean and I went to a free comedy show called Big Terrific. We had yet to cast the role of Donna and to be honest were having difficulty. Jenny was the co-host with Gabe Liedman and Max Silvestri. During the opening bit Anna and I looked at each other, our smiles and eyes were silently screaming, “We found Donna!”

Much like Donna, Jenny has the perfect combination of lewdness and heart. I connected with her material. It felt like she was a long-lost sister or best friend, and I saw that other people in the crowd were feeling the exact same way. I loved the way she was articulating the truth in an honest and hilarious way. The best example of that is a bit she has where she earnestly describes humping a couch in her childhood living room. My face hurt from laughing. Anna and I knew that couch story all too well and we knew that we had to send Jenny the script. Luckily we had friends in common. And the rest is history.

Working with Jenny exceeded my wildest dreams. During our first days of rehearsal while reading through the more serious pars of the script her dramatic range blew me away. Over the course of the many years we worked on Obvious Child, Jenny has played a huge part in shaping Donna.

I love to rehearse because it gives Jenny the freedom to improvise, challenge the material and inject the dialogue with well, Jenny. I would feverishly write the brilliant and inane words that came out of Jenny’s mind, and then sit that evening and cobble together new dialogue. The tone of Donna is very much a collaborative effort.

Filmmaker: What was the process like adapting Obvious Child from a short into a feature? Were there lessons learned on the short that influenced the way in which you approached the feature?

Robespierre: Expanding on a story that we already told in 20 minutes into 85 minutes was rather daunting. Of course, the ending was always going to be the same but there were so many beginnings and middles that could have happened to Donna. And believe me, I have several Final Draft versions to prove it. In the end, it made the most sense to stick as close to the original idea as possible and expand on the characters we created in the short.

The biggest challenge was choosing Donna’s profession. In the short, it was very vague, she was a “freelancer.” That was not going to fly for the feature. It was definitely an “ah-ha” moment and we all slapped our heads when we decided to make Donna a stand-up. Once that was in place, it started to flow freely, and creating Donna’s world was easy. But it took some time getting there.

The short was like grad school. I was still trying to figure out my style as a director. Prior to Obvious Child (2009) I made a short film with a cast of all-teenage girls where we did very little improv. Jenny taught me a great deal about comic timing and how to improv with actors. We brought out the best in each other, and I discovered that my main job is to create an environment for actors to feel comfortable enough in to express themselves on screen. I learned this skill on the short and made it my goal while shooting the feature.

Filmmaker: Obvious Child handles the subject of abortion with, while I wouldn’t call it outright hilarity, certainly a healthy dose of pathos. Can you talk about the challenges of crafting a lighter take on this traditionally hot-button subject?

Robespierre: I think comedy can be found in difficult situations. I also think that there are romantic and comedic elements throughout the story, not specifically the abortion. I know that it is a serious issue, an emotional issue and a decisive issue and I’m not trying to make light of it at all. I always preface all my conversations with stating that this is just one woman’s story. But it’s a story that we rarely see in mainstream media or our culture more generally.

This character is emotionally, intellectually, and financially unprepared to be a mother, so she decides to have an abortion because it is the responsible thing for her to do and it makes sense for her life. Giving voice to that reality, to a woman who safely terminates was very important and lacking in the conversations going on out there, and there was no challenge for us to tell that story.

Filmmaker: The film comes from the romantic comedy tradition, but it’s definitely more substantive and feminist in perspective than the traditional fare that the genre is usually associated with. Who were some of your key influences in developing this tone?