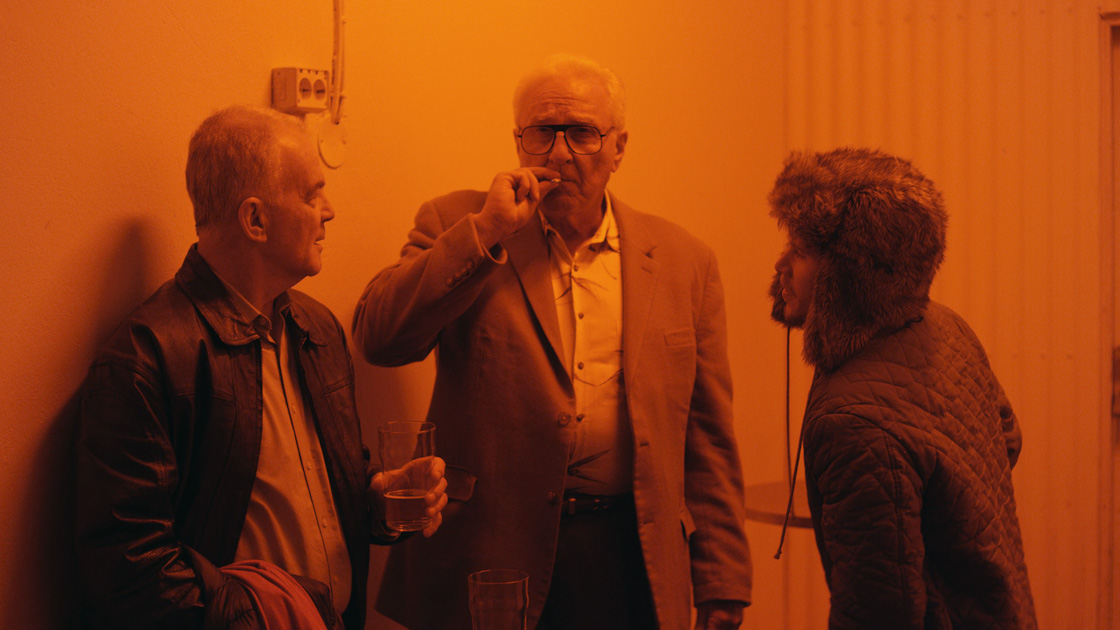 A buddy, road trip comedy about a pair of aging ex-brother-in-laws (Paul Eenhoorn of This is Martin Bonner, and Earl Lynn Nelson) on holiday in Iceland, the film is already being hyped as one of the most promising discoveries of this year’s festival. Land Ho! premieres today in Sundance’s NEXT section.

Filmmaker: A full-on directorial collaboration between two indie auteurs is not something we see very often. How did you two decide to work together, and were there any aspects of directing alongside another filmmaker that you were cautious about going in?

Katz: We really weren’t cautious at all. Martha proposed this idea and I thought it sounded adventurous and fun so we decided to do it. We definitely have our different points of view, and many projects wouldn’t be ripe for this sort of collaboration, but a big part of this one was setting up parameters that we liked and seeing what happened.

Stephens: Yeah, the film has a laid-back, breezy tone and I think that nurtured an easygoing mentality on set. We were both up for experimenting and attempting new things that aren’t traditionally in line with our previous work. Anytime we questioned a bold choice, I would just say, “Balls out, Aaron, balls out” and that soon became a sort of motto.

Filmmaker: What was the collaborative process like on set? How did it prove different from directing your own works?

Katz: We both did everything at different times. Sometimes we each gravitated towards a particular aspect of a certain scene and sometimes we both freely moved around between all the elements. We work with a lot of the same people, including our director of photography, Andrew Reed, so we spoke the same language and didn’t run into a lot of confusing situations. I think because we’re both very confident in our own points of view neither of us felt like we needed to prove anything.

Stephens: It was really fun having a partner-in-crime for this particular film. Aaron and I cooked up a lot of jokes and had a blast bouncing ideas off one another on set. There was also a sense of “we’re in this together” that made the collaborative process unique. The catch to that is we both occasionally had to make compromises, but inevitably I feel that our collective sensibilities made this movie a success.

Filmmaker: At what point did you decide to set the story in Iceland? What was it about the country’s landscape that was appealing for Land Ho!?

Katz: Iceland was in it from the beginning. Martha knew that northern climates appeal to me so I responded to the idea right away. Once I thought about it more, there were other layers of appeal too. The idea of these two guys not being able to escape each other was heightened by them being in such an isolated place. Also the movie’s sense of humor was perfectly juxtaposed by the strange and beautiful Icelandic landscape.

Stephens: Definitely. Much of the film’s humor is derived from this theme of opposing forces. Our characters, Mitch and Colin, are an odd couple doing mundane and juvenile things against this surreal, majestic terrain. Aside from that, I’ve always had a fascination with Iceland and making a movie there was a dream come true.

Filmmaker: You both have traditionally made films about younger characters who are lost in the world. Land Ho! sticks with the theme of aimlessness, but focuses on two men in their twilight years. What about this story — and these older characters — intrigued you?

Katz: It was these particular actors. From the beginning, Martha had the idea of casting Earl Lynn, who had been in her movies before, and I had this idea of including Paul, who I had seen in Chad Hartigan’s movie This is Martin Bonner.

So the starting point wasn’t wanting to make a movie about men of this age, the starting point was wanting to make a movie with these two guys. And I think the theme of trying to find your place in the world is one that is relevant for any age. Of course, I’ve never experienced what it’s like to be in my 60s or 70s, but that’s why we included Earl Lynn and Paul so much in the process.

Stephens: My first film, Passenger Pigeons, was an ensemble that really included all ages, so I’ve never thought of myself as a filmmaker that traditionally makes films about younger characters, but characters that aren’t generally deemed attractive or conventionally interesting enough to be given screen time. With Land Ho!, I really wanted to explore themes of longing, aging, and time in a mostly funny, but also very bittersweet way. In the past, the over-60 set was rarely considered in cinema, but there’s been a recent celebration of them in film that we’re proud to be apart of.

Filmmaker: Another unique aspect of Land Ho! is that it was funded through Mynette Louie’s new Gamechanger Films initiative, which provides financing to films by women directors. What was the process like working with Gamechanger, and what made you decide it was a good fit for Land Ho!?

Katz: The process was great and the movie was a good fit because Mynette and Gamechanger believed in us and the movie we wanted to make. The thing that makes any investor good is mutual trust and good faith. We had those things with them from the beginning so we were able to focus on making the best movie possible.

Stephens: What I liked the most about working with Gamechanger was how supportive they were of my choices. Because I’m a woman, industry folk often expect me to write scripts with female leads, or to only tell stories wrought with social issues or high emotions. Although I’m open to making those kinds of films as well, it was refreshing that Gamechanger wasn’t afraid to take on a comedy that is co-directed by a man, and filled with toilet humor and dick jokes.