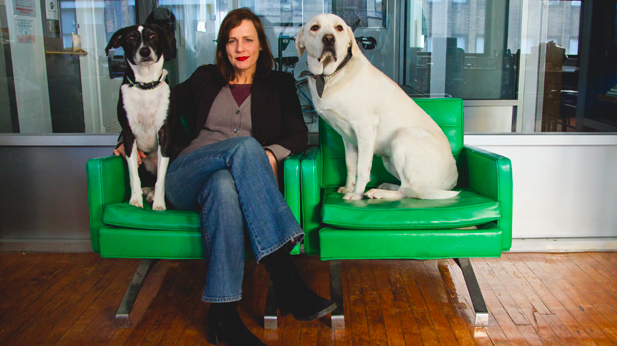 by Danielle Lurie
in Interviews, Sundance, Sundance Features
on Jan 21, 2014

When I walked in to photograph Linda Moran at her office at Belladona Productions in Chelsea, she was on the phone making magic happen. Her film Cold in July, which she produced, was speedily getting picture locked for Sundance and her office, that she runs with fellow producer René Bastian, was abuzz with activity and inclusiveness: it has what I call the “Google Effect” – which is to say that the office is so cool and fun to work in, employees love coming to work. Linda promptly introduced me to the office mascots: her dogs Zombie and Coco who insisted on being part of the shoot (you try refusing those pleading eyes). She walked me toward the edit suits in the back of the loft-like space and introduced me to Cold in July director Jim Mickle, who has also been Linda’s partner for over a decade, as he was putting some finishing touches to his film. The couple has worked together on several films, and Cold in July is their second film to premiere at Sundance (after last year’s Sundance at Midnight premiere of We Are What We Are).

Filmmaking: Why this movie?  Why did you decide to do it?

Moran: In 2007, right after Jim completed his first film Mulberry Street, which I also produced, he introduced me to the book Cold in July by Joe R. Lansdale. The neo-noir elements appealed and I thought it was a good match for Jim’s strengths. He is drawn to dark, even horrific stories but they are always grounded in a deep complex emotionality. I liked the world of the novel, it’s very visual and I could easily see it becoming a film. We optioned the book right away and then it took six years to make! So Jim ended up directing two other films between Mulberry Street and this one. Every time we finished a film, we would say, “Let’s make Cold in July happen now,” but somehow it just took a while for it to become a reality.

Filmmaking: How much of your crew was female? Was hiring women a consideration for you?

Moran: Probably about 50%. Most important to me is hiring people who are good at their jobs and of course, many women are. I like working with women, so when that works out, I enjoy it. A film crew is a collective, and it is good to have balance with both genders represented. Not just in the area of gender, but having an array of strong individuals with all kinds of differences all working towards a common goal keeps things interesting and vital.

Filmmaking: How did you go about raising funding for it?

Moran: My business partner Rene Bastian and I have worked on raising the money for this film for quite some time in every way we thought possible.  Once Jim had made a few films that raised his profile as a filmmaker, it became easier.

Filmmaking: What is this film shot on?

Filmmaking: Do you think this film would have been handled differently without a female creative voice?  How did your being a female producer effect how this film got made do you think?

Moran: I have worked as a producer of some sort on all of Jim’s films. I guess it is a somewhat unique circumstance in that we are also in a relationship for the last 10 years so we have an ease in communicating that probably isn’t always the case. Yes I am sure the film would be different without my creative voice in countless ways. While we don’t necessarily agree on everything, I have had the opportunity to weigh in on every creative decision in this process. I don’t know that I strictly speak for the female demographic in this collaboration but I am sure my opinions are informed by the fact that I am a woman. I have also produced quite a few films with male directors who are not Jim! I always enjoy digging into the filmmaking process with whomever is at the helm, and it is rewarding or less so depending on so many factors – chemistry, talent, timing, money, etc.

In terms of how the films got made, I would say that whatever the circumstances or budget size, I try to provide a work environment where people feel comfortable, valued, and encouraged to do their best. I think that inclination to nurture the brood is a female trait although certainly not exclusively so.

Filmmaking: Who do you hope is your audience? Men or women? Both?

Moran: Both. This film deals with issues of manhood and the nature of father/son relationships, but I think Jim’s work, even in his darker fare, goes beyond the fanboy audience appeal. I am often told by women how much they enjoy his films, something that surprises them sometimes and this film is no exception. I would readily watch this film and I don’t think I am the typical genre audience.

Filmmaking: In what ways do you think being a female producer has helped or impeded your trajectory in the film industry?

Moran: I don’t know! I try to work on movies I care about and that I think people will want to see and I try to keep getting better at my job. I don’t dwell on it.

Filmmaking: How do we get more women making movies?

Moran: Good question! I have only worked with a couple of female directors and would like to do more.

Filmmaking: Of the big blockbuster movies out there, which do you wish you had produced?

Moran: There aren’t many recent blockbuster movies that I wish I had produced but I did enjoy Gravity and before that, i also loved Children of Men. I also have a soft spot for disaster movies of all sorts, so that might be fun.

Moran: Looking at a few things to do with Jim, including a TV pilot and a book adaptation or two. He and writing partner Nick Damici have a great creature script set in the 1700’s called The Night Hunter. Imagine Last of the Mohicans with a monster that eats the settlers!

Also we have a terrific script by a female screenwriter. It’s called Pride and Joy, written by Celery Kovinsky. It’s getting a lot of positive attention as Celery’s writing is so strong. The film has a great femaie protagonist – she’s a funny, smart, biting ex-rocker coping (or not coping) with a failed career and marriage. We want to see that it is made in 2014.

Filmmaking: Considering this article will be released at Sundance: A) What do you hope to gain from being at the festival? and B) Who would be your dream person to meet while there (imagine they will be reading this answer!)?

Moran: A) More recognition for Jim as an incredibly talented filmmaker and a great sale for the film.

B) I am looking forward to celebrating with the people who contributed to making Cold in July. Anything else that happens is a bonus!