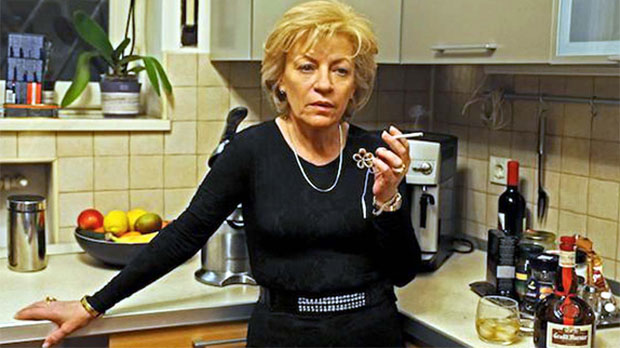 More than a year after winning the Golden Bear at last year’s Berlinale, Calin Peter Netzer’s Child’s Pose, a Romanian domestic drama that covers class and motherly impulses, is finally receiving a U.S. release, opening today at New York’s Film Forum and spreading to L.A. by week’s end. The latest entry in the ever-burgeoning Romanian New Wave, which has given us everything from Cristian Mungiu’s Beyond the Hills to Radu Muntean’s Tuesday, After Christmas, Child’s Pose zeros in on wealthy Bucharest native Cornelia Keneres (Luminita Gheorghiu) and her family, paying particular attention to her connection to her grown son, Barbu (Bogdan Dumitrache). When Barbu, already somewhat estranged from Cornelia, gets in a car accident and kills a teen from a family of lesser privilege, his mother pounces on the opportunity as a means to reclaim her maternal bond, using all her considerable influence to even bend the law to her will.

A film as specific in its locale as it is universal in its themes, Child’s Pose, Netzer says, is a work with very personal roots, born from the relationships both he and co-writer Razvan Radulescu have had with their own mothers. For that very reason, Netzer made the somewhat bold decision to distance himself from the filmed action once shooting commenced, laying out his vision in detail while preparing with his crew, then giving them uncommon agency between “Action” and “Cut.” The result is something intimate but untainted, harsh but objective. And, to hear Netzer tell it, the aftermath has been rewarding and exhausting in just about equal measure.

Filmmaker: I actually just returned from the Berlinale, so I thought that would be a good place to start, considering you picked up the Golden Bear for Child’s Pose last year. What was that experience like for you?

Netzer: Oh, it was very surprising, first of all. And then, for the last year and up until now I’ve been very busy, traveling with the film and promoting the film all over the world. It’s been quite stressful, I can say, after the success in Berlin.

Netzer: Very stressful. Right after the festival, we started promoting the film in Romania, where it went over really well at the box office, becoming the most successful Romanian film of the last 10 or 15 years. And we traveled around Romania and very many cities after that, promoting the film in Italy, Germany, Spain. It was a lot of traveling to festivals and it was a little bit stressful, because there were many interviews that were a lot of the same questions. You get very tired of this, and try to think instead about what you’ll do next.

Filmmaker: Got it. Well, hopefully I won’t be hitting you with too many redundant questions. You mentioned that you found the Berlinale victory surprising. As a filmmaker creating a prospective festival entry, how much are you thinking about how it might potentially be received?

Netzer: Well, it was a big surprise to win the Golden Bear, and first of all, it was exciting to even enter into competition at the Berlin Film Festival. And then to win — it didn’t seem very realistic to me. I hoped, of course, to win a prize of some sort, and I thought it might be well-received, but I thought Luminita Gheorghiu had a good chance of winning the Best Actress award, for example. I never thought of the big prize, the Golden Bear. Filmmaker: Luminita’s performance has been generating a great deal of buzz, and she’s a really formidable presence on screen. What was it like watching her bring Cornelia to life on set?

Netzer: Well, it was a lot of hard work beforehand. We had only 30 days to shoot this film because it was very low budget. So [Luminita and I] prepared for about seven or eight months before the shooting was starting. We rehearsed very much and talked about the character very much. I knew by the time we went on set that she’d do very well, but it was still very tough to shoot the film in such a short period.

Filmmaker: Is that a typical approach for you in working with your actors? That amount of preparation time?

Filmmaker: Apart from this preparation, is there anything else that you’re doing on set to expedite the process and stay within the parameters of your limited shooting time?

Netzer: It’s normally just about me being very prepared. I’ve rehearsed with my actors, I know the locations very well, I’m doing a lot of storyboarding that’s very by the book, and I know everything, every angle, from the beginning. But this time was a little different. There a lot of things. We shot on two digital cameras, and we decided that we’d rehearse the whole scene, and then after that, I’d leave the freedom to the d.p. and the other cameraman to shoot the scene, and follow the actors, and look at the world from their point of view. So it was an exercise for me in sort of losing control. It was important on set as the director because the story of Child’s Pose is very close to me. I decided to give the crew the freedom to tell the story through their eyes.

Filmmaker: Can you describe how the story is very close to you?

Netzer: Well, the script was written by me and Razvan Radulescu, and we had very long discussions about our mothers. Because our mothers, in our childhoods, were very domineering. That was the starting point of the screenplay. There are various parts of my mother in the character of Cornelia. For example, I had my mother meet Luminita, so Luminita could have an idea of what she was like.

Filmmaker: The character of Barbu, Cornelia’s son, is a type that’s become quite prevalent in American culture and media — this 30-something man in a certain state of arrested development, either by his own doing, his environment, or both. Do you find that type of person to be common in Romanian culture too?

Netzer: Yes, I think so. It’s a universal story that could happen anywhere in the world. It’s about a pathological relationship between mother and son. I think that was the main point of the film that brought it to fruition. When I traveled with the film around the world, many mothers, and many young men in their 30s or 40s said that they could recognize themselves through this.

Filmmaker: I appreciated the juxtaposition of the handheld photography, typically regarded as a crude and raw aesthetic, and its frequent capturing of the upper-crust. It’s as if you’re getting to look at these so-called refined people through less refined eyes. Is this something you considered in regard to your technique?

Netzer: Well, this relates to me trying to keep a distance between the story of the film and myself. It’s why I left the liberty to my crew members. We discussed how we would shoot ahead of time, but that was more like an exercise. In fact, on set, the rule was not to have a rule.

Filmmaker: Well I’m glad we looped back to this because I’m very fascinated by this idea of you essentially handing the reins over to your d.p. and your cameraman. What were you doing while putting so much control in their hands?

Netzer: I was watching on the monitors. And after the first few takes, of course, I’d make some corrections. But while I gave them liberty, as I said, I discussed the full process with them so much beforehand, that it was not full liberty, if you know what I mean.

Filmmaker: Okay. Obviously this story has a lot to do with class, and we notice, even in the initial party scene, that there are discussions of medical malpractice, and we get a sense of the extent of these people’s influence, and certain moral compromises they’re willing to make. Can you briefly discuss how this aspect of the film might reflect your own views of class and society in Romanian culture?

Filmmaker: Speaking of Romania as it is today, you are, of course, part of this new wave of Romanian filmmakers who continue to put out exciting projects. I know you’ve worked with a lot of your peers in this movement. How has their work inspired yours?

Netzer: It’s a competition between us, and we inspire one another, for sure. Cristian Mungiu’s first film, Occident, was treated in a very classical way, and it was like [international] cinema of the ’60s. And his second film [4 Months, 3 Weeks and 2 Days], which won the Palme d’Or, was like a minimalistic film of the new wave. And he got inspired, of course, by Cristi Puiu, who did The Death of Mr. Lazarescu. So did Radu Muntean and [Corneliu] Porumboiu. Yeah…yeah.

Filmmaker: Another thing I certainly appreciated in Child’s Pose is that, the whole time, Cornelia is working so hard to exert this damage control until finally it’s all whittled down to this climactic scene between mothers, both of whom have lost a child in one way or another. Given what you’ve said about the rehearsal process, did you and Luminita specifically discuss how this emotional degradation was going to unfold?

Netzer: Yes. We never worked very hard on this, because it was a very emotional scene. I didn’t want to rehearse it very much. And even when we shot it, I think there were only two or three takes. It was very hard for the actors to go through it. It was the scene we shot at the very end of the shooting, and we were talking about it for many days before, because this scene was the key for the film. [Luminita] was very excited about it, and thinking about it constantly. It was the most important scene for her — an explosion at the end.

Filmmaker: What do you hope mothers and sons will take away from this film?

Netzer: Thoughts. The film raises a lot of questions about parents and children. I don’t know. I don’t know what to say. Maybe someone will reconsider his behavior because of the son character’s behavior toward his parents. Or maybe the other way around. I hope it’s like a mirror.