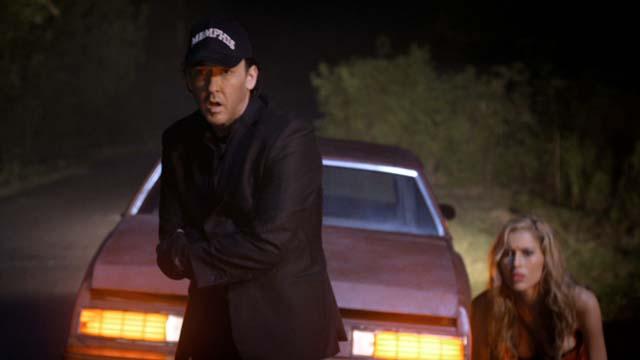 by Brandon Harris
in Directors, Interviews
on Feb 26, 2014

In David Grovic’s The Bag Man, John Cusack plays the title character, a courier for an underworld figure named Dragna (a genuinely terrific Robert De Niro), who’s charged with fetching a mysterious bag and staying put in a fleabag motel until the silver-suited and -haired criminal overlord can come to pick up the goods. It’s the type of movie that has no business being good and not just because the constituent parts feel, well, worn out — the motel that the movie takes place in bears an eerily resemblance to the one Cusack spent most of the forgettable 2003 thriller Identity trapped within and the weird voice and mannerisms De Niro is putting on for most of the picture are straight out of Angel Heart. But a funny thing happens as The Bag Man settles into its narrative, an infectious sense of fun and gallows humor starts to accumulate. Before long, you’re confronting clichés that normally would derail a picture and, if not buying them outright, finding unlikely pleasure in their deployment.

When Jack is double crossed by one of Dragna’s underlings, for instance, and everything starts to come apart, it wouldn’t be unfair to hold such a standard-issue plot point against the filmmakers. Further complication visits Jack when a miscommunication about the rendezvous location for the bag/money swap hopelessly muddles the affair, even in this era of smartphones with global GPS. Nevertheless, it’s hard to resist the film’s effortless charms. Quickly paced and funnier than it has any business being, Grovic’s feature debut relies on genre contrivances that go down smooth due to the commitment of the performers and the deftness with which the director relays narrative information and inserts moments of inspired visual design into what is essentially a chamber piece.

The Bag Man opens in limited release from Cinedigm on Friday. 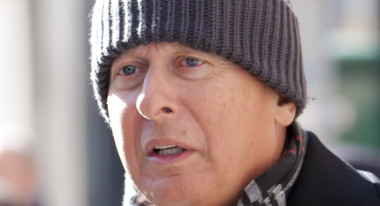 Filmmaker: How did the film evolve from James Russo’s original script to the version you collaborated on with Paul Conway? What spoke to you about the original and how did you try to make it your own?

Grovic: I liked the original concept of James Russo’s script, of everything taking place in 24 hours. I felt that working to such a compressed timeline would really accentuate the tension. From that core premise, we worked on making the characters non-stereotypical. We also latched onto enhancing the structural similarities to Ancient Greek theater. Specifically, the unity of time and the unity of space. We also worked on spelling out our hero’s flaws and imperfections. The other aspect that I worked hard on was enhancing the fascinating similarities to the Romanian fairy tale, “The Cat”. The tale itself is riveting and strange, dreamlike and fierce.

Filmmaker: Was packaging the film particularly difficult — you nabbed a remarkable cast for a first-time feature director?

Grovic: I was very fortunate, which is probably an understatement, that my first choices for essentially all the roles responded so positively to the script. As you know, without the tools you can’t do the job. Therefore, I was immensely gratified that all the hard work devoted to the script was recognized, and indeed appreciated, by the actors.

Filmmaker: Were you worried about finding ways to open up to story visually given that it is a chamber piece? How did you go about designing it with your d.p., Steve Mason? Did you have any particular models concerning the film’s look and feel?

Grovic: I’m a very visual person and, as such, I worked with an amazing production designer, Dennis Washington, to create the palette and colors in order to give the locations — especially, of course, the motel — a life and identity of their own. I tried to do the opposite to opening the movie up when we were shooting inside the motel. For instance, instead of shooting a lot inside the motel room, I tried to make it feel even more claustrophobic and confined by electing not to shoot in the room, but, instead, to change room scenes into bathroom scenes. We may hold some type of record for shooting the most footage in a bathroom! As a result, I think that whenever we stepped outside of Room 13, the settings felt large just as a result of being out of the bathroom!

Filmmaker: What were the most significant difficulties you had to overcome once you were shooting?

Grovic: Most people on set would probably answer that the hardest part was shooting essentially the entire movie at night. However, I’m a night owl, so at the end of the movie I confessed that everyone else’s biggest problem was actually my well-crafted plan to avoid getting up early in the morning! Overall, when you are doing something that is just so much fun, I think it would be rather churlish to think that shooting a movie entails great difficulties. Clearly, certain scenes are more taxing than others, however, in general we should all be thrilled that we have the opportunity to have such fun.

Filmmaker: Is there anything that surprises you about the material that you were unaware of in the writing, but emerged during production?

Grovic: Without giving too much away, Spoiler alert! When you’ve shot the entire movie with a certain something placed in the trunk of the car, I woke up the penultimate day of the New Orleans shoot to the realization the script had not addressed this point. They were set to drive out of town with this thing still stuck in the trunk! I’m very happy with the way the issue was addressed, but it was a hole in the script that I almost failed to spot.

Filmmaker: Was there footage you found that you thought was compelling in its own right that didn’t for whatever reason fit into the story you were telling once you got to the editing room?

Grovic: Yes, there was a very interesting scene at the end of the movie, that involved pulling up outside a Maserati dealership and going in and buying a Maserati. We shot that in the heart of Manhattan, where they don’t stop traffic for you, and we worked hard at getting the take down perfectly. However, it just felt out of place and the wrong tone in comparison to the tone of the rest of the movie when it came to the editing room. They say never to fall in love with any particular footage. It’s true. But it isn’t always easy. In fact, I tried so hard to get this Maserati scene into the cut that I decided I should test it at one of the test screenings. I thought, or hoped, I was too close and that everyone else would think it’s great. But the audience reacted exactly as I had! Where did that come from? It doesn’t belong to this film. Out it went!

Filmmaker: Have you encountered any especially extreme or unusual audience reactions?

Grovic: We test screened the film five times in total in Vegas, LA and NY. It was interesting that certain scenes played better in one state than in another state. Overall, the reaction to the whole movie was virtually identical wherever we screened it. About 75% loved the movie, 10% thought it was OK and 15% hated it. Most of the haters could not get comfortable with the violence. But the vast majority that loved the movie understood that the violence was not gratuitous. I remain amazed that the reaction to the violence garnered such strong emotions. Or perhaps I should really say that I am amazed that the 15% haters did not understand the rationale for the violence. On the one hand, I’d love to make a movie that everyone enjoys. On the other hand, I realize that is almost impossible to achieve. Perhaps if the movie is more run of the mill it’s a little easier but I think that a genre movie can’t please all.

Filmmaker: Is there anything you’d do differently?

Grovic: Surprisingly little. As far as the actors and performances are concerned, there is nothing that I would change. They were all fabulous to work with when the camera was rolling in and also when it wasn’t. I had a great team around me, with few exceptions. In order to have a perfect team, I think that if you’re lucky you acquire that as you make more films. Clint Eastwood has his team around him. He knows them and they know him. So it’s not really that I would do anything differently, as much as it is over time one hopes to develop a team that largely reads each others’ mind.