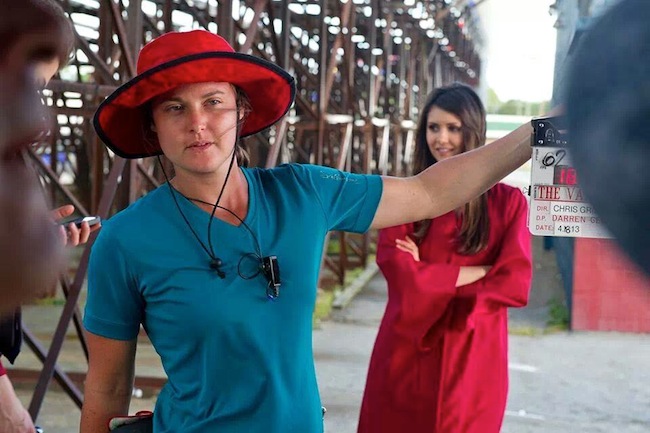 The tragic death of Sarah Jones, a second assistant camerawoman who was struck by a train while shooting the Gregg Allman biopic Midnight Rider last Thursday, has sparked a necessary conversation over the issue of on-set safety. On the first day of production in Jessup, Georgia, the company was shooting a dream sequence with a hospital bed placed over the active train tracks. According to Variety, star William Hurt and director Randall Miller tried but were unable to remove the bed from the tracks as a train approached. Jones was then struck by a piece of flying debris and knocked into the train’s path.

It remains unclear whether or not the production had acquired permission from the railroad CSX to shoot on its property, but the filming occurred on a main line, where nine to 14 trains pass through per day. From the Hollywood Reporter:

Jay Sedrish, the executive producer of the film, may himself have cast doubt on whether the production had permission to shoot on the train tracks. According to the incident report, as obtained by NBC affiliate WSAV, when Sedrish was asked if he had permission to be on the trestle or be on the train tracks, he replied: “That’s complicated.” Additionally, emails from CSX, the company that operates the tracks, suggest that permission to film had been denied. “According to the CSX employee, the production company had previously been denied permission to film on the trestle, and there was electronic correspondence to verify that fact,” stated the report.

The camera was rolling as the train approached the bridge and has been impounded by the Wayne County Sheriff’s department for a homicide investigation. Production of Midnight Rider is suspended until further notice.

Variety has more information on the homicide investigation:

The homicide investigation into the death of Sarah Jones on the set of “Midnight Rider” is focusing on who decided to put the crew on the railroad bridge where the accident occurred and how the crew got access to the property, a source familiar with the investigation told Variety on Thursday.

The answer to the second question appears to be easier to answer. A spokesman for Rayonier, the paper company that owns the land surrounding the rail line at the site of the accident, confirmed to Variety that Rayonier had given permission for the film shoot to be on its property, but it cannot give permission for the crew to be on the tracks, which are owned by CSX. A gate in a fence on the property bears a sign saying access is controlled by Rayonier guards.

But did the CSX railroad give permission for the film crew to be on the tracks? Wayne County, Ga., detective Joe Gardner has said publicly that the railroad says it did not give such permission.

A “Slates For Sarah” campaign has sprung up on Facebook, with productions all across the country (and an international appearance from Downton Abbey) posting their tributes to the young woman who died on the job across their clapperboards. Additionally, a petition has formed to include Sarah Jones in the Academy Awards’ In Memoriam tribute in the hopes of raising awareness about the importance of safe working conditions.

Jones’ death is sparking an industry-wide conversation about working conditions and the imperative to just “get the shot.” Here’s commentary from a dolly grip, “D,” at Dollygrippery:

I have done countless train shoots. I’ve rigged cameras on trains, done dolly shots next to the tracks, crane shots of approaching trains and pushed Peewees down the aisles of passenger cars. I do know one thing, you never shoot on a live track without a representative of the train company there. You don’t approach the tracks or a train unless they know you are there and you have permission to do it. These situations are tightly controlled. And I suspect one other thing. No one said “No.” In this business, we are put in a lot of dangerous situations. A certain amount of risk comes with the job. We regularly shoot in caves, mines, boats, high speed cars, helicopters, and any other dangerous situation a writer can dream up. In these situations we trust that the groundwork has been laid, discussions have been had and meetings held by the higher ups who we often call “the adults” or the “grownups.” We call them that for a reason. We count on them to worry about the details of making us safe while we focus on making the movie. All we ask is that if we are put in a situation, that we know the risks. ALL of them. And sometimes, someone has to say “No.”

Note: this piece was updated following publication and its headline changed in acknowledgement of the pending homicide investigation.