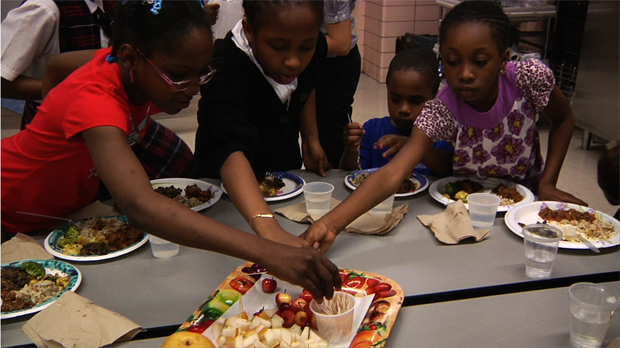 by Randy Astle
in Directors, Filmmaking, Interviews
on Mar 7, 2014

For many American children, school lunch is the only full meal they receive each day. Which is one reason filmmaker James Costa was surprised to see the quality–or lack of it–going into children’s lunches in New York City. He quickly decided the subject warranted a feature-length documentary, and the result is Lunch Hour, which launched Tuesday on multiple VOD platforms. Featuring celebrities like Kirsten Gillibrand and Rachael Ray, the film looks at the systemic causes behind school lunch menus and potential solutions to nutritional deficiencies.

I talked with Costas about his reasons for making the film, his release strategy, and how he hopes to encourage audience engagement. Lunch Hour is  available on iTunes and Amazon Instant Video.

Filmmaker: Tell me a little bit about your background and how you came to make a film about school lunches.

Costa: I had a small production company and was looking to make a documentary. I’m also Chairman of the Board for The Hunts Point Alliance for Children, which is located in the South Bronx. I was visiting some of the schools in the neighborhood and it was lunch time. I was in a cafeteria and saw what the kids were getting for lunch and asked the lunch lady if this was a joke and she said, “No, and actually it’s a good day.” So, I guess you could say the film found me.

Filmmaker: There’s a lot you could say about children’s nutrition in general and school lunches in particular. Where does Lunch Hour place its focus?

Costa: That we should not be serving kids junk food at school. We seem to think that if we serve these kids these so-called “fun foods” that we are treating our kids well. As we all know, with the obesity rates going up in certain ages there is nothing “fun” about that. I also talk about what we eat as a nation and whether this could be part of the problem. I don’t give anybody a free pass.

Filmmaker: There’s been a growing genre of food and nutrition documentaries since Fast Food Nation hit the bookshelves and Super Size Me theaters. How do you see Lunch Hour fitting in with films like Food Inc., Forks Over Knives, Ingredients, Food Matters, and, perhaps especially, A Place at the Table?

Costa: The more films about these issues the better. People will be at all different places in their lives when it comes to food. I think we all need to work together and let people know that they are not alone when it comes to what is best for them on their path to getting healthy. I really tried to make people see that what we are serving our kids at school needs to improve and that we all win if that happens.

Filmmaker: So what kind of impact do you hope the film has?

Costa: That we need to have a serious discussion about this issue and realize that this is not something that can be fixed with a Band-Aid. We are all going to have to step back and say, “We did this to our kids.” If we truly care about them than we have to make some major changes in what we are feeding them. It’s going to be a hard discussion to have but what is the alternative? More unhealthy kids. That would be tragic.

Filmmaker: You’ve just launched on Amazon and iTunes. Tell me a bit about your release strategy.

Costa: I wanted everybody to be able to see the film on the same day. This is grassroots, and I want to make sure everybody can use the movie as a tool to make the situation better for our kids.

Filmmaker: How do you hope they’ll do that? Child obesity has obviously been a big focus of Michelle Obama, for instance, and the New York Times just reported a 43% drop in obesity rates for children ages 2-5 (perhaps before they really integrate into the school lunch system) over the past decade. But there’s still work to be done. What else can people do who want to help improve school lunches or juvenile nutrition?

Costa: The news was very exciting about the drop in obesity rates, but we have to understand that those kids (age 5+) will be entering school soon. What I would say to do is get involved and make sure those children and the kids already enrolled in the school system now won’t be getting unhealthy foods. Healthy food needs to be the only option offered to our kids at school.

Filmmaker: Where are you yourself going from here? What’s next?

Costa: I’m going to do a documentary short. I still have lots of energy left getting the message out on Lunch Hour, but that inner filmmaker voice in me is starting to get loud. I think I can do both and keep everybody happy!