“MY PERESTROIKA” AT STRANGER THAN FICTION

by Mary Anderson Casavant
in Festivals & Events, Filmmaking
on May 19, 2010 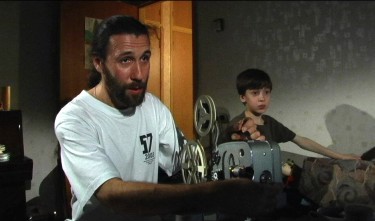 Like history itself, historical documentaries tend to be written by the winners – experts whose “greatest hits” style approach is as comforting as the muzak that plays underneath their interviews. Last night’s Stranger Than Fiction featured director Robin Hessman’s My Perestroika, a documentary so good at breaking the rules of historical docs that it makes you question why anyone ever follows them.

Hessman focuses on the Meyersons, an ordinary Moscow couple who teach history at the same school they attended as children. Struggling to articulate what it meant to grow up Soviet to a group of students that did not, the Meyersons are a little stunned to realize that the world they knew is not just past – it’s history. Weaving together the couple’s home movies with official Soviet footage, Hessman creates both a historical portrait and an intimately personal one.

Interspersed throughout are portraits of three of Meyersons’ childhood classmates, grown ups whose memories of the past often contradict each other. The end result is history not as it is written but as it is told over a cup of tea and a cigarette. For the generation of My Perestroika, history isn’t just alive – it’s also fading before their very eyes.

Filmmaker: When you were initially conceiving the film, did you know that you would rely so heavily on archival material?

Hessman: Before I had people in the film, I had the idea to tell the story of Perestroika as a personal one. At the same time, I was already looking for home movie footage the last generation of Soviet Kids…I knew there was a ton of official footage shot by the Soviet government, but the home movie footage was a harder search. It was expensive, and there wasn’t a structure for it – there were no Kodak stations like in America…It was a lot of being relentless to try to find the 8 MM, the typical documentary detective hunt.

Filmmaker: Against the “official” archival footage taken by the Soviets, the home movie footage takes on a sort of urgency. Did you expect that sometimes jarring effect?

Hessman: There is no agenda behind the filming of home movies. The only purpose is for memory, for prosperity, for fixing a moment in time for a family. It’s so beautiful against a lot of footage we saw about the Soviet Union, which was created by the west to show how terrible the Soviet Union was or by the Soviet Union to show how wonderful it was. The message in the home movie is as close as one can be to being there.

Filmmakers: At what part in your process, did you meet the Meyersons?

Hessman: I started working full time on the film in 2004, and my first trip back (to Russia) in early 2005 was spent interviewing people from all walks of life…I started thinking of someone my age who had been taught Soviet history and who was a young adult as the story was changing and who was now telling the story to kids for whom it was like Ancient Rome, so across that path I met Borya. He told me his wife was also a history teacher at the same school, so the next day when I went over to their house for dinner, I explained the film to them. I asked if they knew anyone who made home movies, and Borya said (his) Dad was obsessed with them and pulled out cans and cans of them. From then, I started meeting the childhood classmates. Knowing it’s impossible to document an entire generation, it was a good way to show the longer lens changes.

Filmmaker: Did you use a cameraman or was it a one-man band type situation?

Hessman: I filmed by myself, which was not my original intent. I thought I would want to concentrate on the relationships and content and not audio levels. So, for the first two or three days I shot with someone else, and it became clear how unmanageable to work with someone else. It was just different. I couldn’t capture the intimacy with this big guy also there. It changed the mood. Also, so much of my time was spending months in Russia where there is a real aversion to making plans, so it wasn’t feasible.

Filmmaker: The film somehow manages to find a balance between imparting information and telling a personal story. Did you worry that American audiences wouldn’t be able to follow it?

Hessman: That was one of the hardest things, trying to balance so that the film was acceptable to Westerners who don’t have a background in Russia or a Russian audience who for this was their life. I felt very strongly about not having a narrator because there are five characters who have very different interpretations of what happened. Having an outsider would work counterproductively to everything I wanted to do with the film…Whenever the balance was off, I focused back on them and focus on where that sort of information added another dimension to their characters. — Mary Anderson Casavant