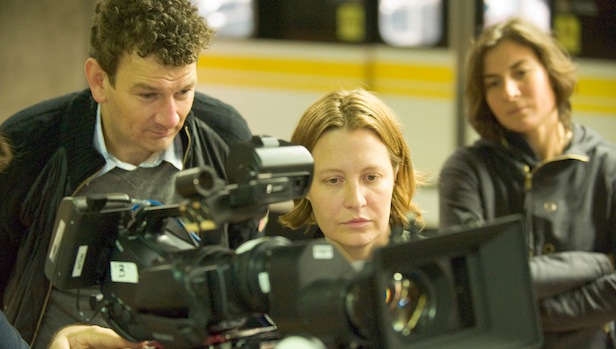 Following “The Women of Sundance” article in our print and online additions, Danielle Lurie continues her coverage of female filmmakers with a series of pieces highlighting women directors at SXSW. In this email interview, she talks with the director of the Narrative Spotlight film, Kelly & Cal, Jen McGowan.

McGowan: I loved the script. I loved the script and I loved the writer. And I could see it. I could see that I could do something special with it. This project originated at a USC alumni program called USC First Team which connected directors, writers and producers. So before then I didn’t know the writer, Amy Lowe Starbin, but we completely connected and that was the start. Of both Kelly & Cal and hopefully a very long working relationship that will extend far into the future.

McGowan: I was in the super fortunate position for my first feature to not really know the exact answer to that question. That would be something my very wonderful producers, Mandy Tagger-Brockey and Adi Ezroni, could answer. But the producers and I found one another by accident! It was thanks to the magical powers of the internet.I was looking for producers and they were looking for a young director and poof! We found one another.

McGowan: I don’t know about legendary but there was something that was very sweet. One day we were filming and we discovered that a gaggle of teenage girls had assembled and were waiting for hours at the bottom of a long driveway of the house we were shooting at. They were waiting to get a glimpse of Jonny Weston. And I knew about this because I heard a squeal that I went to investigate. Jonny was great with them. He went over, said hello and I think signed some autographs. It was really cute.

McGowan: Considering the “normal” make up of a film crew we actually had quite a few women in key roles; myself, writer, producers, production designer, sound recordist, make-up, wardrobe. Hiring women was no more of a consideration for me than hiring men was. I think diversity is very important so I do pay attention to that if something is starting to feel particularly imbalanced in one direction or another. But my main focus is finding the best people for the job. When I am making a movie my only obligation is to make the best film I can make.

McGowan: That’s such a hard question. I don’t think I know. Really those who know the answer to that are the people who either have or haven’t hired me. I’ve had access to some great programs but those programs exist to create a balance. So who knows! Just gotta put your head down and work.

McGowan: We need more women at every level – more writers, more execs, more festival programmers, more agents and managers, more journalists. Not because they are necessarily better at anything because they’re women but because they can recognize when something resonates in a way that someone else might miss. I have no doubt there are great movies yet to be made that have been completely missed because someone read the script or heard the pitch and just didn’t see it. I believe very strongly that diversity, in and of itself, is an asset. In life and in filmmaking. It’s an asset to the industry, the art form and to the audience. So my job is just to prove that theory.

McGowan: This year, award-winners would be Dallas Buyers Club or Twelve Years a Slave. They are wonderful stories, emotionally connecting and visually beautiful. But financial blockbusters would be Iron Man 3. It’s a huge movie with as much heart as a huge movie can hold. My hero is Ang Lee. If I could have his career, I’d be one very happy lady.

McGowan: I have two projects that I’m really excited about. Millie to the Moon, about a young woman who is inspired by space tourism, and Little Girl Lost, which is a murder mystery about a web activist who, when he investigates a small town murder, discovers the victims might not need his saving.

McGowan: I am very much looking forward to watching the film with its first audience. You only get that once, and it’s very special. I’m looking forward to hearing how people respond to it. My dream person to meet at SXSW is my next and future collaborators!

McGowan: Q: If you could recommend one movie that people should see this year that they might not have heard of what would it be?