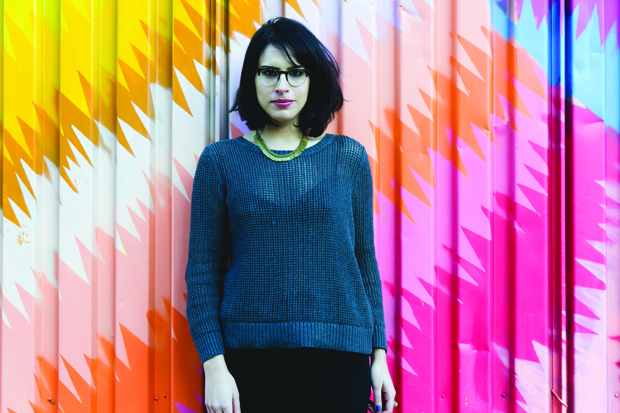 Women, this is our year.

As Sundance kicks off in Park City, a large handful of women are about to debut their new films and fresh voices to the world. And after interviewing almost all of them myself I can say, in my most eloquent terms, that this year’s slate of Sundance female filmmakers is absolutely badass. The women of Sundance 2014 are brave, bold, eccentric, decisive, bawdy, humble, confident, hilarious and provocative. Their films will make you laugh, cry and actually give a damn.

The only thing is: there won’t be that many of them. And I want to know why.

I’m a female and I’m also a filmmaker — and it wasn’t until very recently that I realized (or, rather, admitted) I am actually a combination of both: I am a female filmmaker. Strong, tough, too focused to be bothered by gender, most of the Sundance women filmmakers I’ve spoken with for this piece also share this closeted femaleness, telling me: “I don’t see myself as a female filmmaker. I’m just a filmmaker, period.” But a deeper look at the very low numbers of working women in film makes me wonder if we’ve all been too long ignoring the very female elephant in the room — our gender itself. 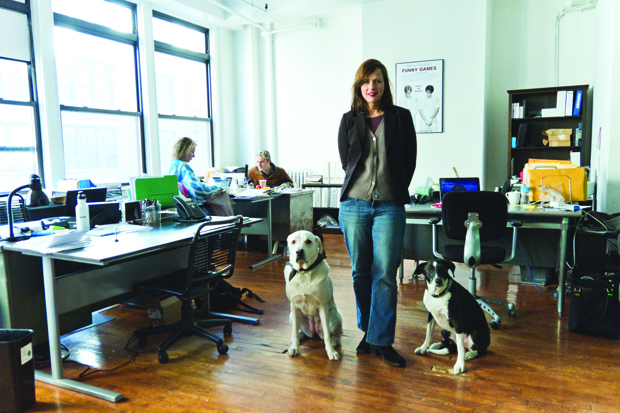 Last year Sundance and Women in Film Los Angeles (WIF) did a research study led by USC Annenberg School professor Stacy Smith called Exploring the Barriers and Opportunities for Independent Women Filmmakers. This was the first study to look at all feature films that had been both submitted to and/or screened at the Sundance Film Festival from 2002-2012. It analyzed, across many categories, the percentage of Sundance films directed, written, produced, filmed and edited by women. It attempted to answer the brooding question: Why has film been, and continues to be, such a male-dominated industry?

The results were fascinating.

This is very strange because from where I sit, in my little female-filmmaker-laden pocket of Brooklyn, women seem to actually be thriving in film. Many of the women filmmakers I know personally have big agents, have mega stars attached to their next features and get nominated for Oscars.

So why are the numbers telling a different story? Despite the substantial buzz that some female filmmakers generate, why aren’t more women actually making movies?

“It’s important that the issue is talked about,” says Keri Putnam, a former top executive at both HBO and Miramax and now executive director of the Sundance Institute, which has long supported working female filmmakers. “My hope is that these numbers make people realize that this is way off balance and ask what can be done.”

In a second part of the Sundance and WIF study, 51 independent female filmmakers were interviewed about how their gender has impacted their career trajectory. Participants cited five key reasons:

Shoot. If I’m being honest with myself, these five impediments resonate for me too, and this bums me out. I don’t want my gender to be a factor in my career to such a large degree. That just seems so 1966. And if these are truly our main barriers, then I want to explore them and see what can be done. And what better focus group to learn from than the female filmmakers of Sundance 2014.

This year, with 3,293 feature films submitted to Sundance, women directed 773 of them. That’s 23.4%. Of those, 35 female directors breathed a sigh of relief when that phone rang at the end of November (what I like to call “Around-Thanksgiving-Terror-Time”). Out of 119 total feature films accepted to Sundance in 2014, women-helmed films make up 29%. (This number is down from 33% last year).

The numbers are even worse within the world of mainstream entertainment. Of the 100 top box office films between 2002 and 2012, just 4.4% were directed by women, as compared to the 22.2% of female-directed independent narrative films in competition at Sundance. As a possible explanation, Putnam says, “I think the conventional wisdom has been that women will go see movies about men, but men won’t go see movies featuring women. And since studios strive for the biggest audiences they can find, this has led to a studio slate that skews decidedly male.”

In terms of the broader film industry, then, Sundance is an outlier, even with its low 22.2% female representation of films in competition. After speaking with many of the 2014 Sundance women some edifying trends emerged. 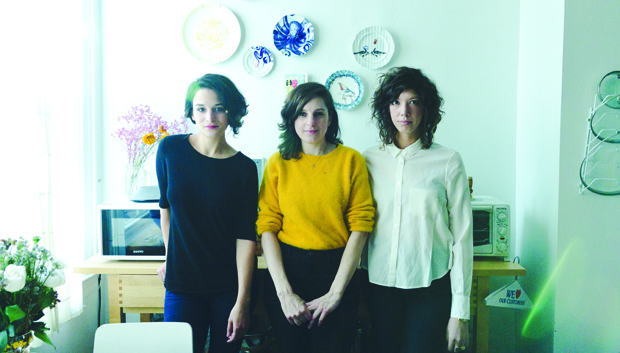 At this year’s Sundance, women are, in large part, making films about women (and acing the Bechdel Test). Desiree Akhavan’s film Appropriate Behavior is about her own experiences with bi-sexuality and being an Iranian-American female. Amy Albany’s script for Low Down chronicles her own life growing up as the daughter of a man who was “a talented jazz pianist and a diehard junkie.” Mona Fastvold’s The Sleepwalker is “about the complex relationships between sisters” (of which she is one of five). Mina Djukic’s The Disobedient is “a dialogue between [the filmmaker’s] male and female sides.” Gillian Robespierre’s Obvious Child features a female comedian who deals with getting both dumped and pregnant around Valentine’s Day. Sydney Freeland sets her film, Drunktown’s Finest, on the Navajo reservation where she grew up.

Sophie Hyde’s 52 Tuesdays is her exploration surrounding the tension that sometimes exists between being a mother and being yourself. Kate Barker-Froyland’s Song One is about one woman’s journey through a world of music. Madeleine Olnek’s The Foxy Merkins chronicles the highs and lows of lesbian hookers. Valerie Veatch’s Love Child focuses on extremely modern motherhood. Maya Vitkova’s Viktoria features a woman who gives birth to “the baby of the decade” in communist Bulgaria. Andrea Seigel, writer of Lynn Shelton’s Laggies, wrote the script “after a year of attending a bunch of wedding and baby showers and just feeling really confused by them, like, ‘Are people actually enjoying this?’” And Cynthia Hill’s Private Violence explores the complexities of domestic abuse of women and is executive produced by the very instigator of women’s liberation herself: Gloria Steinem.

It’s important to note that women aren’t telling these female-centric stories because it’s all women are interested in. They’re telling these stories because no one else seems to be. “We’d been waiting to see a more honest story that we hadn’t really seen in a comedy before, in which a woman goes through a real experience that doesn’t define her life,” says Obvious Child director Gillian Robespierre. “We weren’t sure how long that wait was going to be. So we decided to make the film ourselves.” 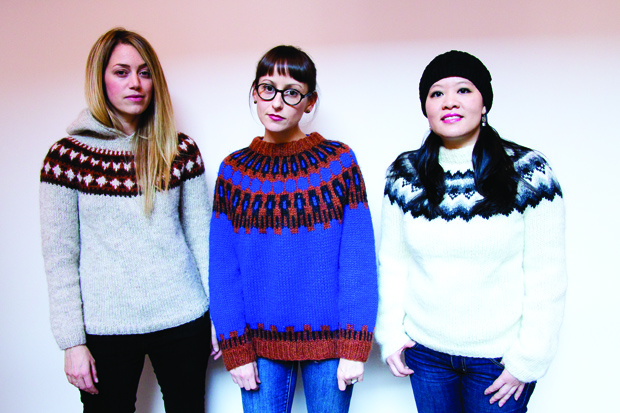 However, says Song One director Kate Barker-Froyland, “I think it’s really important for female filmmakers to not be pigeonholed into making one kind of film. I’d like to do a range of films as a director.” At this year’s Sundance, many women are doing just that. Edet Belzberg’s Watchers of the Sky studies genocide. In Web Junkie, Israeli co-directors Shosh Shlam and Hilla Medalia tackle the topic of Internet addiction in China. Tessa Louise-Salomé’s Mr leos caraX is a portrait of the Holy Motors filmmaker. Kat Candler’s Hellion is a film about “a family of motherless men.” And Martha Stephens’ Land Ho!, co-directed with Aaron Katz, is a male-bonding movie set in Iceland, upon which Stephens reflects that “maybe because I’m an outsider to male bonding, I wanted to use this story to explore it.”

After being asked if they catered their stories to either male or female audience members, these filmmakers all said no. When I also asked the female comedy directors if they added any “male humor” just to appeal to male moviegoers, I got another resounding “no.” “I hope that our audience is all humans, whether or not there is a penis or vagina in their pants,” says Obvious Child star Jenny Slate. “Funny is funny” was the answer three different filmmakers gave to explain why they hadn’t altered their creative vision for the sole purpose of making their films “one of the boys.” 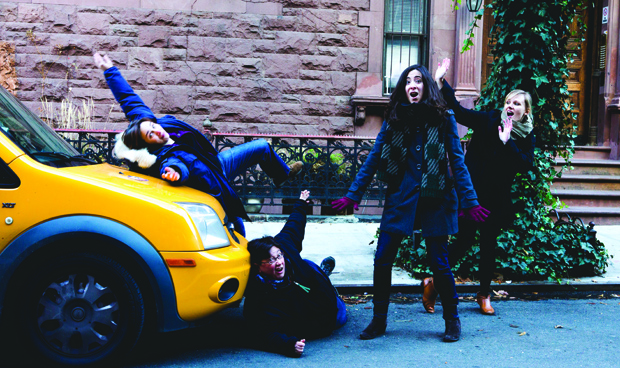 The next thing that became clear to me is that women beget women. “We found that when a Sundance-screened film was directed by a male, 23% of key creative positions (i.e., producers, writers, editors, cinematographers) were held by women,” explained Smith of her Sundance and WIF study. “However, with a female director, 44% of those roles were held by women.” This proved to be the case for this year’s Sundance films helmed by women. “I think 95% of my crew was women — it actually became a running joke that there were never any men on the team,” says Stephanie Soechtig, director of the documentary Fed Up. “One of our key cinematographers, Rachel Beth Anderson, who shot some of the most dangerous scenes in Syria, is a woman,” says E-Team co-director Katy Chevigny. Cinematographer Reed Morano, ASC (d.p. of two Sundance 2014 films, Skeleton Twins and War Story) says she has “several aspiring female d.p.s that work for me in my camera department that I’ve become a team with along the way.” In fact, almost all the Sundance films directed by women had predominantly female crews. On directing the female-rich crew of Laggies, Shelton joked that “it’s refreshing to not be the only estrogen-producing entity on the set.”