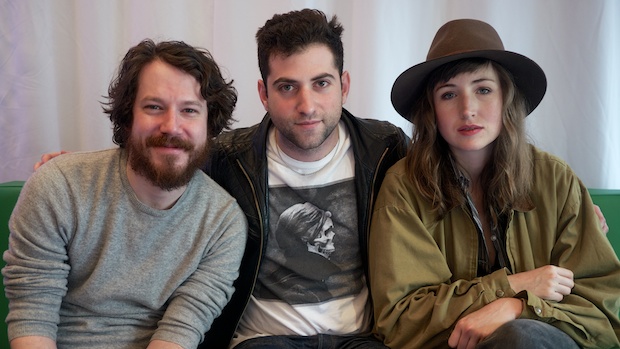 Premiering at SXSW in its Narrative Feature Competition, The Heart Machine, the first feature from film journalist Zachary Wigon, is an astute romantic drama tackling the interpersonal confusion of our internet age. (Full disclosure: Zach Wigon has written for Filmmaker, and I contributed to the film’s Kickstarter campaign.) With technology altering and intermediating the ways we discover each other, meet, communicate and even break up, our romantic rulebooks are being surreptitiously rewritten, and right under our noses. Yes, a kiss is still a kiss, but is a text just a text? Or, in the case of Wigon’s film, a Skype session the same as an in-person heart-to-heart?

In The Heart Machine, John Gallagher, Jr. (The Newsroom, Short Term 12) plays Cody, a young Brooklynite in an online relationship with a writer, Virginia, on a fellowship in Berlin (Kate Lyn Sheil of Sun Don’t Shine and House of Cards). They’ll meet in person when she returns but, in the meantime, share confidences and intimacies in regular Skype sessions. But when Cody hears a suspiciously American-sounding ambulance siren outside Virginia’s apartment during one of these calls, he reboots himself into a hipster Harry Caul, determined to find out if he’s being emotionally messed with. Meanwhile, we watch Virginia carefully compartmentalize her own love life, using apps like Blendr to score casual hook-ups.

Given the film’s subject matter, SXSW — ground zero for the launch of consumer communication apps (and where, this year, Secret was its near-breakout) — was an apt spot for The Heart Machine‘s premiere. There I caught up with its director and two stars, and we talked about intimacy, the internet, the challenge of self-distribution and bad New York wi-fi.

Filmmaker: Given SXSW’s interactive conference, with its focus on new technology, mobile and apps, it seems like this was the perfect place to premiere your film. Did you always intend for the movie to be part of the dialogue around technology, and how it is altering our social behavior?

Zachary Wigon: I wanted it very much to be a part of that dialogue, although I didn’t necessarily want it to be an out-and-out critique of the way apps are used. I wanted it to be more of an exploration of some of the contradictions in how we go about using these apps to compartmentalize different parts of our social lives. One of the film’s central ideas is that with apps like Tinder, Blendr, Grindr, dating sites like OKCupid, and then Skype and Missed Connections on Craigslist, there are different ways to compartmentalize the different aspects of one’s dating life. You can take all of the different components of a relationship and break them into its constituent pieces. You can have physical interaction without emotional interaction, and you can have emotional interaction without physical interaction. The way these apps enable us to break that stuff down is really fascinating to me, and, I guess, a little bit troubling. I don’t feel like I’m a Luddite or anything like that, but it felt like it was worth exploring.

Filmmaker: The film doesn’t feel overly judgmental to me. Kate and John, as actors did you feel you had to take a stance as to whether your virtual relationship was a “real” one or not?

Kate Lyn Sheil: I don’t think I really took a stance. I had a great deal of empathy for the character when I first read the script. I think that the film is a tragedy of this love between the two characters. It’s real. So, in that way, yeah, I think that a real thing was created online.

Filmmaker: How about you, John?

John Gallagher, Jr.: Yeah, I [feel] similarly. There’s not too much commenting — it just felt like we were playing the truth of the characters. When you look at all of what we have at our fingertips now, it’s very hard to blame anyone for however they happen to use OkCupid or Skype. It’s really complicated and kind of messy and hard to make sense of. As you said, what Zach had created was a very nonjudgmental story of people doing some very questionable things. And yet, there’s a great deal of understanding; it’s never framed in a judgmental way. Something Zach saud [at the Q&A] I’ve been thinking about, which is that [technology] is such a big part of this story, and, yet, it’s kind of “just there.” It is such a part of our lives now that we don’t even think about it. We finish these screenings and [before the credits finish] 20 people in the audience have already taken out their phones.

Wigon: There are things that are troubling about the compartmentalization but also things that are beneficial about it. It’s all contradictory — there is no overarching judgment you can make because there are negative and positive aspects to the way that we use these technologies. What’s interesting to me is just trying to observe that behavior in a way that feels true. And then, the audience becomes a little bit collaborative. If there is a judgment to be made, then hopefully the judgment is being made by the viewer and not by me. There are positive things about these apps, among them the fact that communicating with someone through a buffer might enable someone who might otherwise be a bit socially awkward or shy to come out of their shell, to drop their defenses and expose themselves in a different way.

Filmmaker: I just came from listening to Edward Snowden talk, and it was a little garbled via Google Hangouts from Russia. The other day, Julian Assange from London was apparently indecipherable at times. In New York, I live downtown, where Kate’s character lives. I have Time Warner Cable and the internet is awful, always cutting out. I’m assuming that on your budget you were actually Skype-ing each other rather than compositing in post, is that right? So how did you deal with bad NYC internet?

Gallagher, Jr.: Whenever we filmed the Skype scenes, we were in different rooms of the same building. For all of the Skype scenes that take place in my apartment, [Kate] was upstairs in a different room. And for the ones where you see her in her apartment, I was down the hallway in another room. The irony is that it is a movie about the heightened ability to communicate and we were constantly up against the internet connection going out. We would do a Skype recorder on every call so that we would have a hard copy of the take from the computer’s internal camera. And sometimes, we would do a really good take, but the Skype recorder would quit and we’d have to start it over again. So we were up against these little things that I certainly had failed to think about in the beginning. There was something really great about it, but it was a little terrifying because, after a while, with your scene partner in a different room, you do kinda start feeling self conscious. Like, “Oh my God, this is just so much of me. I’m doing like, a monologue here.” Seeing the movie cut together, it was really nice the way the two [shots] play against each other.

Filmmaker: Understanding eyelines and how they match can be a tough thing for a first-time director. I realized watching this film that you, Zach, didn’t have that problem in the scenes with John and Kate because they’re always looking at the computer camera, not each other.

Sheil: Well, that’s the weird thing about Skyping with someone: you’re not actually looking them in the eyes. The only other thing that I would say is that we did have a brief rehearsal period before we started filming, where we rehearsed the scenes face to face, which was helpful to create that intimacy.

Filmmaker: Did you try to put in a T1 line?

Wigon: We got a [wi-fi] booster. I don’t know how much good it did, but we did have a booster.

Filmmaker: Zach, you’ve written for us and other publications, and are familiar with the world of not only independent filmmakers but also independent film distribution. What are your thoughts on the life of your own film, its distribution? And are these thoughts informed by your knowledge of what other filmmakers before you have or have not done?

Wigon: The article you wrote for this Sundance about the fact that no one had done the Upstream Color [self-distribution] thing this year was interesting, I thought. Right now, yeah, we are looking at going the more conventional distributor route with it just because the [DIY] framework isn’t necessarily there. Also, I don’t know if the skill set is necessarily there for me to lead a distribution and marketing sort of campaign for the film. There is a void, an inefficiency in the structure right now, and you feel like someone will find a way to make money by correcting it. I don’t know what that way is because if I knew, I would do it and make a lot of money. But, it seems like something will change. But yeah, we’re pursuing the conventional distribution strategy right now, screening it for potential buyers.