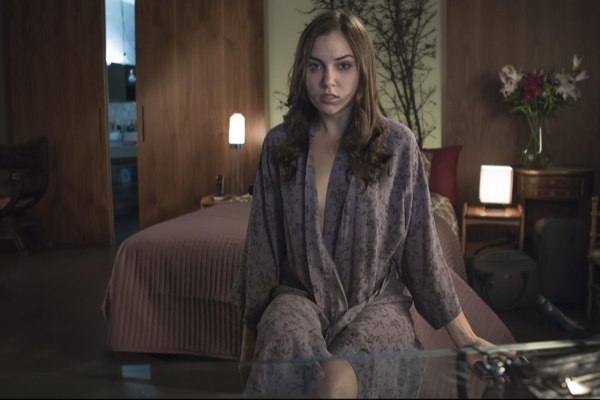 by Steve Macfarlane
in Director Interviews, Filmmaking
on Mar 15, 2014

Spanish filmmaker Nacho Vigalondo is criminally underappreciated in the States, dating back to his brilliantly circuitous 2007 debut Timecrimes. Hopefully that wrong rights itself with Open Windows, a film that manages to take place entirely within the screen of a consumer laptop. Elijah Wood stars as Nick, a sweet-cheeked fanboy who, through an online contest, wins a date with current It Girl Jill Goddard (Sasha Grey.) But she cancels. Instead, Nick gets a phone call from a fed-up admin for her website, who remotely connects Nick’s laptop to Jill’s cellphone, offering a bit of peep-show revenge as a consolation prize.

This means that moments like Jill’s boyfriend being taken hostage, or Nick somehow surviving a berzerk car chase, are glimpsed solely via webcam and live feed. Open Windows adds up to a digitally mediated reassessment of Rear Window, a bleak hacker comedy, a treatise on the resentful underside of geek culture and a genuine-article techno thriller. It’s rejuvenating to see so many subtexts and filmmaking ideas crammed into an ostensibly normal-sized Indiewood picture, but it’s to Vigalondo’s credit that the film reads as crisply and intuitively as it does. Open Windows has its last screening of SXSW today in the Visions section.

Filmmaker: Can you talk a little bit about working with Elijah Wood, if and how the movie was shaped around him as a leading man? Was it written strictly as it was shot, or did you and Wood find yourselves collaborating further after he was cast?

Nacho Vigalondo: Elijah, who I’m friends with, was in my head through the whole process of writing. The character is weak, fragile, but in the second half of the movie he turns into someone darker. We all agree that Mr. Wood is perfect for it. The guy can be sympathetic and then scary in a blink, without apparent effort. He’s amazing.

Filmmaker: How long did you have to develop the “interface” for the story? It seems so rigorous, especially when you’re also figuring out how to do something like a big car chase.

Vigalondo: We decided to design an animated blueprint for the whole movie before shooting, a tool that was incredibly useful in order to define the length of every take and the synchronicity of every window. It also helped to explain the crew how the hell our movie would look like. The script, in this case, wasn’t especially clarifying.

Filmmaker: The film seems politically wise on a number of levels, but you were shooting even well before the Snowden revelations. Can you talk about your research as a screenwriter, constructing the world of hacking and surveillance?

Vigalondo: As the project was developed the reality became closer to the story. Not only the Snowden revelations, but also the rise of Julian Assange as some kind of counter-culture superhero, the stolen pictures of famous actress… The thing is I never intended to scare people showing the fragility of privacy through the Internet, I was more worried about the moral tricks the net plays on us, especially when everyone else’s intimacy is invaded.

Filmmaker: Open Windows has this kind of dreamy final 10-or-so minutes. Was that scene its own idea early on, or did the script take you to that destination?

Vigalondo: It’s something the script asked me to do. Two main reasons took me there: In one hand, the movie is constantly changing its appearance, and the epilogue is asking for another formal jump (I couldn’t move back or just stay the same). On the other, that’s the only sequence when two actors actually face each other. I wanted to show them together, but without losing the sense of fragmented reality, which is the mood of the whole story.

Filmmaker: This is your third film and each of them have been distinct in terms of genre: time-travel, science fiction, romance. Do you strive to avoid repeating yourself?

Vigalondo: It’s something that’s never planned in advance. But I confess I get bored easily, and I need to get excited with any project in any particular way. For example, I’m writing a monster movie these days. But, after all, I like to think I’m talking about the same stuff again and again.