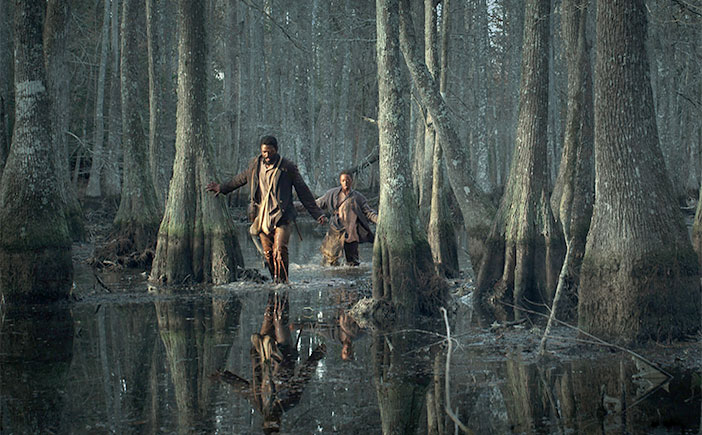 by Brandon Harris
in Directors, Interviews
on Apr 3, 2014

Low-budget period indie films are rare in and of themselves, but to find one which inhabits the war-torn south with such authenticity and veracity as Chris Eska’s The Retrieval is rarer still. Set towards the end of the Civil War, the picture follows young Will (Ashton Sanders), a former slave. Along with his uncle Marcus (Keston John), Will has fallen under the sway of brutal bounty hunter Burrell (an eerily effective Bill Oberst Jr.), who threatens to kill them unless they can retrieve escaped slave Nate (Tishuan Scott). Crossing lush forests that double as battlefields, Will and Nate struggle to survive amidst the chaos of late-stage wartime, caught up in a dubious complicity during a period in which whose law would rule the land was still very much in question.

Eska’s debut feature Autumn Evening was a fest circuit hit and opened in limited release in 2008; here, he finds simple yet economically evocative images for an expansive story. Shot with low-budget ingenuity by cinematographer Yasu Tanida, the movie pops without making much of a show of it. The same could be said for Eska’s marvelous cast of unknowns, especally Scott and Sanders, whose time together provide some of the most memorable scenes of messy human ambiguity this critic has seen all year. They’re two to watch out for.

The Retrieval is playing through April 15 at Film Forum. Filmmaker: What made you want to tell this story, one of black complicity with the system of slavery?

Eska: The original seed of the idea probably came probably in 2010. It was a year before the 150th anniversary of the Civil War and so there were tons of articles and books coming out. I was interested not in the stories of tragedy and heartache, but these stories of hard work and sacrifice that got us to that point on January 1st, 1863 when the Emancipation Proclamation was signed. My thought is always going to what happens next? What does January 2nd look like, what does a year after look like? Even five or ten years later, what does the situation there look like? That’s something we’ve not really seen shown on film before. The introduction of the complicity is there even though among the main characters in my film, none of them are slaves. There’s no strict complicity. Historically again and again, whether with the Romans and the Christians or the Nazis and the Jewish people, there’s almost always the people who are in the power structure who use the oppressed for all types of horrible things. What does the tragedy of warfare look like after emancipation? There’s a time in history where people had decided how things are going to move forward, when they’re suddenly out there with no way to make a living and there’s no resources, somebody just in this chaos that was happening at the end of the war.

Filmmaker: The project is very lean in a way. It feels like the type of movie designed to be doable on a low or micro-budget, yet it never feels like you’re compromising anything in terms of depicting the period. What were the major challenges in doing that while still working on what I imagine was a shoestring?

Eska: It was definitely on a shoestring budget. A lot of people were volunteers, including myself. It’s always incredibly difficult on any low-budget film. But the thing is, you talk to the people who get $30 million to make their movie and they always feel like they’re pressing against the ceiling and they never have enough time and never have enough equipment and never enough money. They wish they had $42 million instead of having $30 million. So to me, I can’t really get caught up in that sort of normal indie thing of talking about how difficult it is to make low-budget films, because I’ll always have to think about it, no matter what my budget is. I don’t restrict myself on what I write, I just write what I want to make. I write what I want to see. Amateurs or people who are experienced professionals can in one day almost teach themselves how to do computer graphics, CGI work. And that’s the case of what we did with a lot of our grander shots.

The shot of the camp, that was made by somebody who had never worked in CGI before. He just read about it, saw some clips on YouTube and stuff and said I can do this. And he obviously could, and a lot of those things allow us to give that space and that scale, just in a few key, key parts. You still keep the sort of intimate type of film that I’m interested in but you add that extra level of believability.

That’s just from a computer standpoint and from an epic kind of standpoint. But as far as the production design, of course you can’t run down to Target and get whatever pair of pants or clothes, you can’t just go buy them, it wouldn’t make sense. So our production design team did a tremendous amount of work and were incredibly resourceful. They didn’t even purchase some clothes, they did a lot of clothes as originals that they designed and sewed and stuff. But then they also bought a lot of other clothes from The Gap. They’d take out all the stitching, they stressed it with sort of movie tar coal and rubbed it raw, rubbed it until it was breaking and then patched it back up. Another component was the reenactors. We had quite a few reenactors, not only some that appeared in the film, but those who also loaned us things like cooking gear and weaponry and canteens from the period. All these things that are very important to them to be shown period correct. We definitely couldn’t have done it without those guys either.

Filmmaker: How did you come across Tishuan and Ashton?

Eska: I cast them both in Austin. I found Tishuan out of Houston, but we’d apparently shared one year of overlap, because I was kind of one foot out the door at UCLA grad school and he was just beginning. He was in the acting program, I was in the directing/production program, but we hadn’t met because I wasn’t shooting a project at that point. When I saw him the search was over. I knew instantly that he was the guy for me. And then for what I refer to as the kid, he had just turned 15 when we started shooting. Now he’s 18. My film August Evening has a lot of young actors, first-time actors.

I actually met the star of August Evening just on the street, loved his boots, thought he had a great head of hair, just like this sort of gentle, sensitive patriarch of our family. I just taught him how to act. He kind of dropped out of society and he became part of filmmaking. So when I had to do that again we cast a broader net. I went to every school probably within 115 miles of where I was living and where most of the crew came from. We had on-camera auditions. We even knew the information to get from yearbooks, for my casting assistants to go through and send letters home to parents encouraging parents to bring their kids out to auditions. We didn’t leave any stones unturned, because you can’t make a film unless you have the perfect cast.

At the end we found Ashton through a casting agent in Los Angeles. He came out for an audition, just through the normal channel, he’d been through the channel before but it was his first time on film. He and I got to go through that process that I was looking for, which is to kind of discover together what type of actor he’s going to be for the screen. He’d had experience onstage in a musical. I’m incredibly perspicacious with all the performers, not just those two guys, but everyone.

Filmmaker: Are there things you didn’t realize in terms of the type of story you were telling until you were shooting?

Eska: When I work with someone who has never been onscreen before I’m incredibly specific. There is no improvisation, everything is written down, everything is blocked out, rehearsed in advance. I had Ashton memorize every bit of the entire script before we shot, and we rehearsed exclusively both in Los Angeles and in Texas so that it was down to when to pause in a line, when to take a step, when to stand up, every single thing was memorized. All these inflections of the lines, all the sayings, and where the apostrophe lands, everything. That can seem almost sort of dry and robotic perhaps, when you over-rehearse something. But what happens is when I get out on set with these actors that I’ve chosen, and hopefully I’ve chosen intelligent sorts of people, you get to the actual location and that first-timer no longer has to worry about all of these crew members standing around staring at all these bright lights, all the pressure.

What I do is I ask them to think about their family and how the scene can relate to their life. And I don’t try and get inside their head and talk about the time that their cat died trying to elicit tears in a manner like that. Instead I rely on them and I step back. It’s amazing, because every time without fail this very dry, robotic, over-rehearsed performance suddenly becomes very genuine and naturalistic. I’ve seen that happen so many times, and I’m always amazed by it. That’s something that I learned, because later they’ll talk to me about their personal life. It’s not just family history, speaking about what their family might’ve done years ago. To me that’s very interesting in my personal experience, that I can’t completely plan ahead. It’s just such an incredible day-to-day sort of battle with a million soul-crushing moments. Every single day for a director on a shoot can be like that. At least in my case, I want things to be in a very specific way. I have my mind made up ahead of time how that should be. When you get on set, with the realities of time and weather and noise or what’s available, your monetary resources, that knowledge is everything. It just comes down to compromise at that point. I’m just trying to get it all on camera.

I’ve been doing this for a while, 15-plus years. I used to be completely fascinated with production value and style and interesting effects and all these types of things when I was first starting out, digital editing and cameras. But more and more and more I’m less interested in all of those things, because at the end of the day anybody can do that, anybody can have those things. We can’t compete with Hollywood in terms of budget or having all the equipment that’s necessary for the camera shots or the production design or any of those things. Hollywood can’t even compete with commercials per second on how much is spent on a dollar basis. But what we can compete on is story and emotion. I sort of have to let go of all those things I would like to do if I had millions of dollars and just concentrate on the acting and on the emotion of the scene. I do whatever I can within our extreme limitations for highlighting those emotions, highlighting those things in the film, whether it’s just the acting or the lighting or whatever production design we can scrape together.