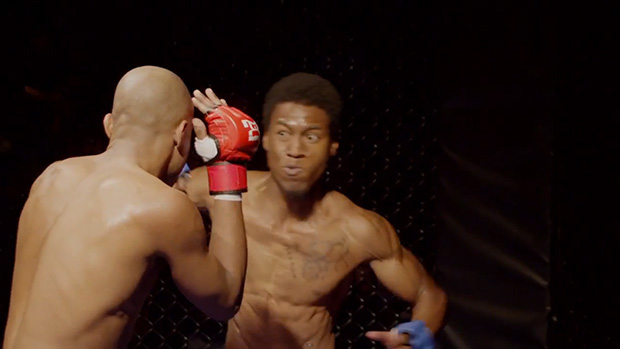 by Michael Murie
in Director Interviews, Filmmaking, Production
on Apr 30, 2014

The documentary Fight Church looks at the intersection of Christianity and mixed martial arts, and how pastors training fighters can reconcile their faith with a violent sport. The film premiered at IFFBoston. Co-director and editor Bryan Storkel previously directed and edited Holy Rollers: The True Story of Card Counting Christians, which examined a devout blackjack team.

Filmmaker: How did you get into filmmaking?

Storkel: I went to school for media, but I never made my own stuff until after I really became a fan of documentaries. I started watching documentaries and going to film festivals. I think I went to South by Southwest maybe five or six years in a row and I just really liked documentaries. At that point I decided I wanted to make documentaries.

Filmmaker: How did you get involved with Fight Church?

Storkel: Our producer Eben Kostbar was making a narrative film in upstate New York and he was using a guy to train some of his actors in martial arts. He found out that the guy was also a pastor and a fighter. It was such a crazy, crazy thing that he decided he had to make a documentary about it.

There’s also another director, Daniel Junge, he’s an Academy Award winner for Saving Face. He started the project and then he brought me on board a few months into it, and we directed it together from there. The collaboration was great. After my last project, Holy Rollers, which took four years off and on to complete, I decided that I wanted to get more involved in other people’s projects and not have them be just my projects. I’d met a lot of great filmmakers at festivals and I wanted to work with others, so I started looking for ways that I could get involved on smaller levels and work with other people.

Filmmaker: How long was the project?

Storkel: Fight Church was about two years off and on of shooting and editing, and a little bit more time waiting around for things to happen. The fights were three or four months between each other. Once we were finished, we waited for quite a while for distributors to respond and for film festivals to respond, so there’s a lot of waiting involved.

Filmmaker: What did you shoot with?

Storkel: The slow motion fight scenes were shot with the RED Epic. The rest of the film is shoot with several different cameras. As time went by, during the production, we would get different cameras. We always knew we wanted some really high-end fight shots, so we had my friend come with his Epic and he would shoot the slow-mo and we would also have our cameras shooting. But we couldn’t afford him for every shoot.

Filmmaker: What did you edit in?