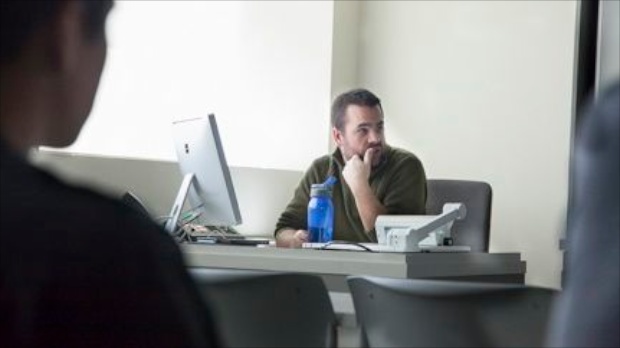 I’ve been teaching film at different southern California colleges for the past nine years, and it has occurred to me recently that the landscape has changed. It has always been competitive, but it has become even more so. When I first started, finding work as an adjunct was difficult but possible, especially if you had relationships at film schools that needed part-time help. One of the dirty little secrets of higher education is that colleges are often DESPERATE for adjunct faculty, and will madly scramble for any warm body at the beginning of a semester. However, like everything else, when the financial crisis hit schools began cutting classes and if you didn’t already have a solid slate of classes at many different schools, you were often out of luck. Folks coming out with graduate degrees from 2008-2012 met a very cold teaching market. And, as the notion of making a living as an indie filmmaker increasingly becomes a romantic expression of naivete rather than feasible life-plan, it seems that the supply of teaching hopefuls grows exponentially each year.

When I was in grad school, I knew I was going to use teaching to pay the bills while I made a go of it as an independent, “art” filmmaker. It just suits my personality and knowledge base far more than being a freelance crew member (I detest waking up early and can’t withhold an opinion for longer than four seconds). This meant figuring out how I could get college teaching gigs without a substantial filmmaking resume. I knew I would stay in Los Angeles because almost every college or university in southern California has some sort of film program. Also, I have two film degrees and am well versed in both critical studies and production, so I thought this flexibility would give me more options. As a grad student, I worked as a teaching assistant, ran lab sections, and even asked and was allowed to guest lecture, both to get my feet wet and so I could place “guest lecturer” on my CV as I began my job search. Because of some unbelievable luck, I was able to start teaching at two different universities right after I received my MFA.

I have a full time gig now, and it took me six years of adjunct work before I finally landed one. These jobs are hard to get, highly competitive, and changing constantly. It’s important to remember most of these jobs aren’t “prestige” hires. If you have several Sundance premieres, films distributed by Sony Pictures Classics and Fox Searchlight, then you can look for offers from Columbia, NYU, USC etc. For most of us, however, the jobs we land don’t come with the perks of a prestige job. (Teaching two graduate seminars a year for a six-figure salary?! Yes, please.) Generally, you will be under the same contractual obligations as your colleagues from other disciplines: A full-time load (nine to 15 units, depending on state, level of teaching etc); office hours; “college service” (many hours spent trapped in committee meetings, a world not unlike Terry Gilliam’s Brazil) and various other administrative duties from hell. It is a job, a full-time job, and it will take up much of your time, attention, and energy. Considering all of this, I thought it might be useful to post a few thoughts on applying for one of these jobs and what the hiring committees are often looking for.

First, you must acquire skills as a teacher. As crucial as your film work is for your value as a faculty member, your experience and skill as a teacher is just as important. Teaching demands a far different set of competencies than filmmaking, and it’s imperative you understand this when pursuing academic gigs. Anecdotes and war stories about your past productions or the time your worked with “x,” are most certainly not enough. You must be able to articulate complex cinematic concepts in an accessible, dynamic manner, as well as control a classroom, write functional, comprehensive syllabi, and work autonomously. And the best way to acquire these skills is to put in time as a part-time/adjunct instructor. Most if not all full-time positions will require three or more years teaching experience at the college level. As a part-timer, you don’t have to deal with all of the political nonsense and extra work hoisted upon full-timers. It’s teaching only, so hiring committees expect you to be good at it when you interview for a full time gig. And you should try to expand your expertise. One of the easiest ways to get teaching experience is to teach the classes no one else seems interested in or capable of handling. For instance, it’s difficult to find people who can teach film history properly. Lots of film school graduates are conversant in New Hollywood and Neorealism, but most of them can’t speak with equal confidence or depth about Third Cinema or the Japanese new wave. There is a “gap” here. Buy the Bordwell & Thompson, David Cook, Gerald Mast intro books and any other general film history texts and reacquire the knowledge you’ve forgotten since film school. While you shouldn’t be teaching graduate level history seminars without a PhD and research focused in the area, intro-level film history does not require that kind of specific expertise. It will have value.

Second, the make-up of a hiring committee and how you craft your message to them is crucial. You could be interviewing with a bunch of Hollywood veterans, a group of indie/art/experimental makers, critical studies and new media experts, or a committee that has no filmmaking expertise whatsoever (this happens far more than you think). You need to tailor your presentation, your discipline expertise, to their perceived biases or ignorance. No matter how much academics believe they can maintain analytical distance, they are just as susceptible to their own myopia as the rest of us. Research the program and their course offerings. What are these people’s interests, how can you fit in and bring something new, while not upsetting the departmental ecosystem ? When hiring a full-timer, committees are highly aware that this person will be their new collaborator. They want someone who’s bringing something significant and worthwhile to the table, while also being a tolerable colleague.

Third, show some sense of vision or leadership. Adjunct work is mercenary teaching: you come in, teach your class, go home. Full-time work is far more than that. The more specific ideas about what you think a film program should look like, how it should function, and the type of realistic impact it should have for its students, the better. Do you have ideas for how the program should change? Does the curriculum need updating? The more you understand about a state’s curriculum standards, the better off you will be. Also, it should be noted, full-time film production and screenwriting jobs are becoming more and more rare. The more expert you are in transmedia, graphic arts, web design, mobile app design etc, the more you might fit the department’s future plans for growth and change.

Fourth, don’t lie about your academic credentials on your resume. It’s amazing how many people make this mistake. If you claim you have an MFA when the degree was never conferred because you didn’t finish your thesis, your application is null and void because you have lied. You will not be considered for the position and may have killed any chance of getting employed by that particular school, even as a part-timer. It’s much better to be honest. If you have a BA, and a lot of upper division/graduate level units in film production/studies, along with three-to-five years of high level filmmaking experience, that might be enough to qualify for the job. Most schools have equivalency criteria they can put applicants through if they don’t meet the state minimum qualifications (graduate level/terminal degree in specific area of study). In short, tell the truth about your schooling. It gains you no advantage and will end up costing you chances at getting jobs.

Fifth, demonstrate respect for the academic. Too many filmmakers seem to look at schooling as unnecessary, impractical, or secondary. This is easy to spot and insulting, especially to a group of people who have dedicated their lives to research, study, and teaching. If you don’t respect the endeavor, don’t apply for the job.

Full time postings generally start coming online around October and will continue until around February or March. Higheredjobs.com, the Chronicle of Higher Education, the CCC job registry (California Community Colleges) as well the individual university or college websites themselves, are the best resources for these openings. Salary is usually dependent on your education level (degree and # of units completed), especially at state schools, but generally speaking the starting range is anywhere from $45,000-$70,000. Private schools have less standardized salary structures, which can be beneficial in some cases, problematic in others. It can mean you can negotiate a higher salary if you have some kind of leverage; it can also mean they will pay less than the average state school because there might not be a collective bargaining agreement with negotiated salary schedules.

There are many other issues to consider when considering teaching as a day job: The ethics and value of film school; the impact on your time/ability to make films; the mechanics of academia. Perhaps I can deal with those in a later post. For me, it provides financial stability and built-in filmmaking time (six to seven weeks in the Winter; nine to 10 weeks in the Summer) and the feeling of doing something useful in the world. There are a lot worse ways to sustain yourself as an independent filmmaker.

Eli Daughdrill is a filmmaker and professor in Long Beach, CA. His documentary Jonas is available through Amazon and jonasthefilm.com. His script Faith was selected as part of IFP’s Emerging Storytellers program in 2013 and will go into production sometime before Eli starts collecting his pension. He can be reached at elidaughdrill AT gmail.com.