Out of My Hand: Production Notes from a Micro-Budget Liberian Film Set 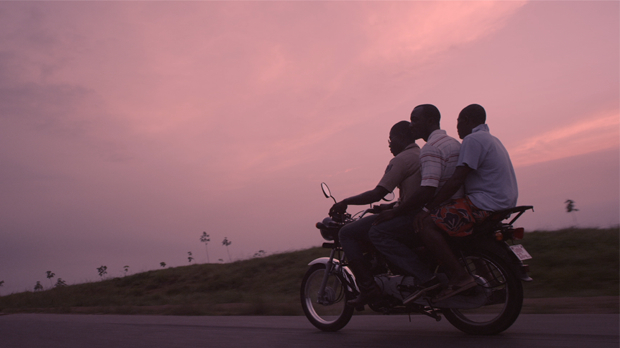 Out of My Hand

When my creative partner Takeshi Fukunaga summarily told me he wanted to shoot his first feature film, Out of My Hand, in the country of Liberia, I was skeptical. He and I run a Brooklyn-based production company, TELEVISION, and neither of us was particularly well-versed in Africa, let alone in the mysterious and contradistinct country of Liberia, whose two successive civil wars (the last of which ended only ten years ago) were preposterously vicious in size and scope.

At the time, Takeshi had been inspired by a yet-to-completed documentary film by the late Ryo Murakami, his brother-in-law, who’d visited the country several times and who later lensed our film too. Both shared a deeply felt curiosity in the complex history of Liberia and its compelling and resilient people.

I did what anyone would. I Googled, I Wiki’d, I watched Vice’s Guide to Liberia (whose subject, General Butt Naked, we later cast to play a pastor in our movie). No particular online research and development, you predictably learn, quite prepares you for endeavors this unique.

First, we wrote a script together. Later, we’d have it translated from our American English into northern country Liberian, which, if you haven’t heard it before, is an incomparable vernacular, demanding weeks of patient effort for the American ear to make sense of. Next, we began involving as many New York-based Liberians in film and the arts as we could.

When Takeshi left for Liberia by himself in March of 2013, he had only one mission: cast the film before returning to Brooklyn. Fortuitously joining forces the Liberia Movie Union, his casting call swept the country over national radio and on TV, where Takeshi was interviewed and met with astonishing warmth. Next came the Liberian government’s involvement and support, their immediate issuance of permits, dispatch of film and security personnel, and assistance in negotiating locations and facilitating tête-à-têtes with the local rubber plantations.

With momentum and enthusiasm for the project waxing, it suddenly became apparent that the time to shoot was not after a return-regroup in New York, but rather in double-time. Together with Ryo and producer Mike Fox, oiled by a small sum of private investments that Takeshi had managed to bring in only months before, I quickly shifted the film from development into instant pre-production. A month later, an eight-man team flew out to meet Takeshi in Liberia.

Here are a few things that I learned while producing the movie across Liberia.

GET DIPLOMATIC
Out of My Hand features an entirely Liberian cast and was shot, with the support of the Liberian Movie Union, with a half New York/half Liberian crew. This meant that, at any given moment, culture clash abounded; almost all of it positive, but some of it needing a soft, deliberate hand to smooth. Most simply put: make sure you make all of your crew, wherever they’re from and however experienced they are, feel equally important to production.

There are few opportunities for filmmakers in Liberia to practice their craft. You’ll find, in places like this, that what might be lacking in technical expertise is made up for in enthusiasm and passion for the work. Our Liberian colleagues always seemed ecstatic to be on set, no matter the sometimes challenging hours in the heavy African sun, and were especially eager to learn.

Whether you have a good budget for labor or not, it’s always great to offer in-kind training to people in places where educational film resources are seldom found. You’ll be inspired by how quickly passionate people, with little opportunity but a lot of drive, can become highly capable members of your set. Ask your DP to invite questions about his equipment and set-ups; ask your grips and gaffers to involve people in building the trucks; ask your producers to explain contracts, software, budgets to anyone interested in knowing.

70% of the film was successfully shot in Liberia, and in June, we’ll complete principal photography in New York. To provide further incentive to the Liberian government for support, we offered further training to key crew members of the Liberia Movie Union during this time. Several of them, along with two Liberian principal actors, will be joining us here in New York City in June, and the Liberian government has committed to covering both their visa and airfare expenses.

Committing percentage points of the film’s future profits in the contract is always worth considering, both for principled reasons as well as for extending your spectrum of support. Committing points to the Liberia Movie Union, effectively making them shareholders of the film, was a no-brainer for us, which served both as a sincere show of our appreciation to them and an invitation for their more intimate, long-term participation in the project.

LOSE YOUR WATCH
There is a thing in west Africa that people call “African Time.” African Time basically means: don’t hold your breath, Mac. People’s relationships with time in Liberia simply operate differently than what we’re used to in New York. When making appointments to meet with your actors, officials or location proprietors, you must temper your sense of time with the reality of your environment. Do not be surprised when showing up to a meeting results in your waiting three hours alone, only to receive a non-apologetic phone call requesting a reschedule for “later.” More important than not being surprised, do not get upset, or you’ll be grayer than blue by the time the shoot’s over.

When trying to engineer and execute a production schedule in a place like Liberia, you must take constant, deliberate steps to assure time maintenance. A Gmail call sheet won’t do it, since many people are not frequent email users, so you’ve got to be prepared to call every single member of talent and crew on their phones: first every night to remind them of their call times, and a second time every morning, to remind them not to be late. Calling a third time, to remind them they should leave the house now if they want to make it on time, is a good policy. There’s no effort too excessive to try to keep your production on track.

Lastly, on time: if you’re smarter than we are, you’ll be sure to try to get to West Africa before the rainy season, which begins really picking up in late May. We did try bringing over rain gear for the camera department from New York, but it was a bit like trying to fix a leaky roof with a Band-Aid. Rain in West Africa doesn’t care about you. We lost a few days learning that lesson.

DON’T STOP TALKING — EVER
Though pretty much the same can be said for getting things done in New York and in LA, “talking kills” is a good motto to have in Liberia. It’s a place where — as often is the case in environments where there’s not much to barter — accomplishing things depends on the currency of mutual respect, personal affinities and making people feel valued.

Unlike in New York, however, there’s virtually nothing you can’t accomplish in Liberia if you literally refuse to shut up and persist in a friendly, respectful way. From locking down federal buildings for locations free of charge, to convincing the region’s Chief of Police to commit full-scale, continuous production security every day, to convincing the Customs Officer not to arrest you for not carrying your passport — and everything else in between — Liberian production is make-or-break in words, words, words. They can’t say “no” if you don’t let them (in a respectful way).

In a lot of ways, Liberia and places like it are perfectly fertile grounds for independent filmmakers who may not have access to big budgets, but have great ideas and a desire to surround themselves with people whose primary motivation may not be monetary compensation, but rather the experience of filmmaking. I truly believe that shooting a high quality feature film in a place hungry for a film community, like Liberia, is possible with only a camera, a plane ticket, and a willingness to talk with people. And once you start, just don’t close your mouth, ever.

VACCINATE PROPERLY
Film aside, Google “infectious disease and travel medicine,” locate your local avenues, and do not cut corners on vaccinations and prescriptions recommended, no matter how unlikely your contracting them might be. People in Africa have a sometimes higher tolerance/immunity for maladies prevalent in their regions than we do, and consequently might in spirit or attitude take certain risks, like malaria, lightly. In fact, these risks are not to be taken lightly.

Moreover, there are a host of completely unexpected health problems that can arise in such an extremely foreign environment with little access to effective treatments. Midway through the shoot, our entire crew, and some of our talent, suddenly went all devil-eye on us, their corneas bright red, their lids swollen half-shut. The Liberians told us this was “Apollo,” an otherworldly infection said to have been brought back with Neil Armstrong from the moon, and the doctors there offered us eye-drops whose effectiveness was questionable. It was only on our return to New York that I learned “Apollo” was actually an aggressive strand of conjunctivitis.

Liberia’s situated on a belt in Africa known to host a lot of dangerous diseases and health risks. Be thoroughly prepared, take all recommended medication from your travel medicine clinic, and avoid looking directly into the moon. Don’t forget to invest in a proper first aid kit. No matter how micro you are, make sure you’ve properly insured your production for the region/country/continent in which you intend to shoot.

The Kickstarter to help donate to complete the movie can be found here.