The Language of Motion: At Vincent Laforet’s Directing Motion Tour 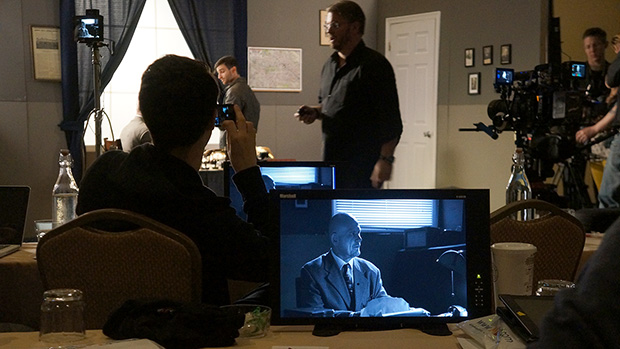 On a wet Saturday in May, about 100 people gathered in a hotel ballroom for the Boston stop of Vincent Laforet’s Directing Motion tour. This daylong event, with an optional evening session, promised to teach all levels of filmmakers the cinematic language of motion. Laforet started by saying that he was going to ruin cinema for us, and proceeded to show a clip without audio. “It’s never, ever moving the camera because the camera should move,” he said.

The event is structured in two parts: a daytime workshop that runs from 9:00 am to 4 pm, and an evening seminar that runs from 5 pm to 8 pm. You can attend both or either of the sessions.

The morning session covered the basic language of camera movement: pan, dolly, etc., with examples from many well-known films. If you’ve been to film school, or been working in the industry for a while, you should be familiar with most of those terms. But there were lots of little tips, like how to identify the difference between a zoom-in and a push-in. If there’s no detail in the background you won’t be able to tell which is which, but if there is detail, you’ll be able to see objects move relative to one another on a push-in, but not on a zoom-in. 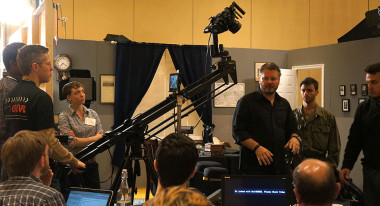 The bulk of the remainder of the session focused on setting up some actual shots and trying to record them. A few things stood out about this event. First, everyone was seated at tables, and most of the tables had an HD monitor displaying what was also being displayed on the main screen. This was really useful if you managed to sit in one of the seats in front of those screens, providing a much better image than the large projected image.

Also impressive was that they had set up a basic set, in which they actually recorded some scenes using two actors. Laforet invited people from the audience to act as crew for these sessions. The registration mentions that if you register early and are in one of the crew seats, you’ll get a chance to be part of the crew, but New Englanders are a reserved bunch and Laforet ended up having to call on people from the rest of the audience as well. He also observed that the Boston crew took the longest to get the first set-up done. It would be interesting to know whether people in different parts of the country really do act differently when thrown randomly together. Is it cultural, or the random chance of who he picks?

In addition to the set pieces, Laforet also attempted to shoot an action scene that involved the two actors coming in to the ballroom and chasing after a suspect. They shot the scene with multiple cameras on shoulder rigs, a Steadicam and a MoVI. 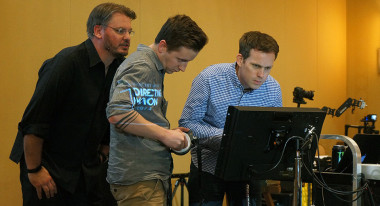 I think the effort to use novices to crew the early shots was a mixed bag. It might have been more interesting to spend more time on the intricacies of setting up shots with a crew that had some idea of how to use a dolly, and focus on doing minor changes to the movement of the camera, rather than spending multiple attempts trying to get close to the original.

Ultimately, how much you got out of the sessions depends on your experience. I don’t think anyone could come away without learning something. For me, one of the most interesting parts was the evening session where Laforet talked about a commercial he shot for Nike. This project’s biggest limitation was that they had only 45 minutes with each of the athletes that were appearing in the ad. This meant they had to spend weeks testing and planning each shot to make sure they would get what they wanted on the day.

I spoke to several people after the event to get their opinion, and they were nearly all enthusiastic about their experience. Brian Arata works professionally in audio, but he and some friends shoot small independent movies and shorts. He felt that the workshop would be useful for them because “the next time we start shooting a project we’ll all be on the same page in terms of how we approach a project. I feel that education is very important in terms of staying relevant in any profession that you do. I’ve been following Vince’s work for a couple of years and I got a sense that he was a very good educator. I think he delivered today.” 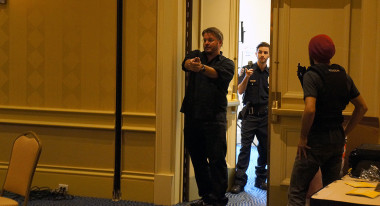 Arata particularly noted the conversation about using devices in film. Laforet showed a portion of E.T. “at the beginning, when you saw the person with the keys it was representative of a threatening person, and you keep hearing the keys, but at the end of the movie you realize that the guy with the keys is actually an ally of the kids. It adds an element to anything you’re shooting if you can find a device that you can use to assist the story.”

Matt Butler has a background in music videos and documentary, though he’s now in the corporate video world. He said he came because he never went to film school and is self-taught. “I’ve followed Vincent and I want to learn about directing motion,” he said, “because camera movement just makes everything more exciting, but I wanted to really learn the theory behind it.” Butler said that he absolutely got what he was expecting from the event: “I sent out a tweet that I’m never going to shoot without Vincent’s worlds in my head, the difference between motivated movement and unmotivated movement, that sort of thing.”

When asked what stood out for him, it was one of the setups of a shot from Schindler’s List where the actor enters the room and the camera pans just a little to follow him. “I wouldn’t have noticed that unless he’d pointed it out, because I haven’t reached that point where I’m dissecting films when I watch them. Everything he showed after it was like, ‘oh yeah.’ It’s on a higher level: what are you trying to convey, what are you trying to get across, and then let’s move the camera to either enhance that or push it in that direction, so that to me was like common sense, but you have to be told it.”

Writer/producer Joseph Streble said he came to “kick it up a notch” and that “there’s more to moving the camera than just jiggling it around, which is what you get mostly if you’re hand-holding.” Streble noted that there was a wide range of experience at the event: “There are some people who have never operated a camera right up to people who are on the verge of real professional filmmaking, so addressing everyone’s need here is a little tough, but I really liked that he explained why he moved the camera.”

One attendee who didn’t want to be identified said that he’s a studio operator for a cable network. He said that they get the opportunity to come to workshops to learn new things and to see if there’s any new gear or new styles they can adapt for their studio work. When I asked him what he thought of the workshop he was hesitant at first, saying that it “wasn’t bad.” After some thought, he added, “It was simple blocking. We’re used to multi-camera shoots and things like that so it wasn’t anything out of the ordinary for us, but some of the smaller setups were pretty cool.” Todd Rapisarda, an intern with Cambridge Community Television said “I pretty much got a whole new idea on how to use the camera from a directorial standpoint.”