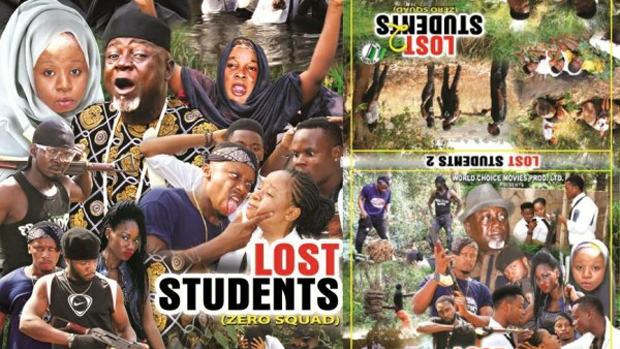 For even casual observers of the Nigerian film industry, it’s not surprising news that the nation’s second largest-employer (behind agriculture) has already churned out two films about the April kidnapping of 276 girls by Boko Haram: at an average of 50 movies a week, the industry makes a routine point of speedily incorporating topical concerns. Last year’s Boko Haram: The Movie (understandably retitled Nation Under Siege at home) is far from unique, with a particularly high-profile example in 2012’s Last Flight to Abuja, a plane crash drama inspired by the nation’s spate of air disasters that coincidentally premiered just after another passenger plane crashed, killing 153.

The DVD covers for the two kidnapping films don’t promise particular sensitivity or nuance. There’s the self-explanatorily titled Lost Students (Zero Squad) and The Missing School Girls…There Is God O. The latter phrase comes from a televised speech by Nigerian first lady Patience Johnson, who broke down crying while addressing the kidnapping. (Her cry was sampled into a single released by comedian Omobaba.) At this time, that’s pretty much all the English-language information available online on these two films.

The suitability of quickie cash-ins on the tragedy is a moot point for the prolific industry, whose growth was approvingly cited by the United Nations as a driver for the continental African economy. Last year, the country’s finance minister claimed the film industry employed 200,000 people directly and another million indirectly — a comparative drop in the bucket of the nation’s roughly 50 million unemployed youth, but hardly negligible. From that angle, trashily topical fare is a quick way to tap into current anxieties while keeping people employed.