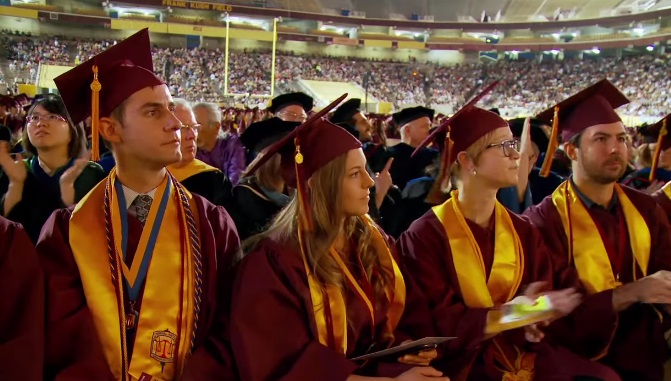 by Brandon Harris
in Directors, Interviews
on Jun 13, 2014

Page One: Inside the New York Times director Andrew Rossi’s damning doc Ivory Tower details how the increasingly outrageous cost of a college education — spurred by the rise of administrative salaries, lack of government support and the arms race for the best and brightest (and richest) among us — is killing the American dream and heightening the divide between the haves and have nots. Rossi’s movie isn’t covering especially new ground if you’re out in the world while reading about how it’s all falling apart. The Reagan/Friedman ideology suggesting education is a private good that ought to be paid for with private money has seemingly won out, even amongst the so-called liberals who make up the majority of our university presidents. You know, the ones with high six and seven-figure salaries who are asking most of us to take on debt to encounter information one can increasingly glean on the internet for free if we’re savvy enough.

The movie follows students, administrators and professors at universities large and small. The far-flung talking head cast includes California governor Jerry Brown and web 2.0 educational guru and Udacity founder Sebestian Thrun (his massive-open-online-course model is debunked here, by the way), and leaves you mostly in despair. Costs will continue to rise; debt will continue to be incurred; needless buildings and football stadiums will continue to be built; the middle class, which college is ostensibly supposed to feed, will continue to crumble. Student debt has surpassed credit-card debt, totaling over $1 trillion. We’ve taken a right and made it a commodity. 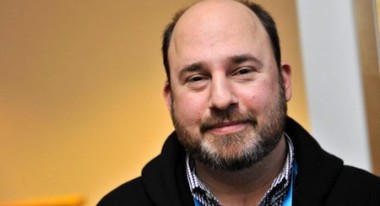 Filmmaker: The student debt crisis is this looming aspect of a larger story you’re telling about various crises in the American university system. What was the first part of this issue that spurred you to investigate these matters further?

Rossi: I started thinking about doing this film in 2011. That was when student loan debt passed the trillion-dollar mark. It’s t-day, as it’s come to be known, that I think really raised the red flag and got me to start thinking about what it would be like to bring cameras on the ground at a range of universities and see what’s going on in higher ed, because I think that sort of opened the floodgates to a lot of conversation about what’s going on on college campuses. Why is it so expensive? How has student loan debt gotten to this point?

Filmmaker: You cover so much ground in terms of the number of people you interview, the number of universities you visit, the number of issues you raise. What was the process like to try and get your arms around this entire set of issues?

Rossi: We started pre-production and development in the spring of 2012. That was a process of doing a ton of research, trying to find the most salient sociological studies on the state of learning and the state of student loan debt and statistics on employment for those who have a college degree versus those who don’t, and then also a sort of casting process in which we thought about different schools and different professors who might be an entry point into different aspects of this larger question about what college is good for: why it endures as a valuable sort of bridge between adolescence and adulthood, and an engine of social mobility in our society, yet has become broken in terms of its cost.

Filmmaker: Did you feel like you’d be able to encompass all of those issues in one film? I imagine the earliest cuts of this movie must’ve been quite difficult to work through.

Rossi: Yes, absolutely. We had over 500 hours of footage. We had several storylines at different schools and with different analysts that we weren’t able to include in the final cut. We had three editors working on the film, putting stuff together simultaneously as we were shooting. I think after the experience of making Page One, which is more broadly about the crisis in newspapers and the role of digital media supplanting traditional print — after making that story almost exclusively through the prism of the The New York Times media desk, I felt that I wanted to take on another large cultural institution through more of a sort of essay format that would look at a range of institutions rather than staying exclusively with Cooper Union or Harvard or a unique program like Deep Springs.

It’s true that either one of those sets of characters probably could have supported their own film, but in this case I wanted to see if there was something special about combining multiple arguments and storylines into one sort of package, one narrative experience. Because I think that what’s notable about this debate on higher education is that there are so many different statistics and arguments that are compelling.

So, for example: last week Dave Leonhardt at The New York Times had a look at the wage premium that those who have a college degree get over their lives versus those who only have a high school diploma. And it’s true, and we see it in the film, that the median lifetime earnings of those who go to college is about a million dollars more than those who don’t. But that’s just one piece of the calculus about whether college is worth it, because that number by itself doesn’t include all those students who go to college but drop out and aren’t able to complete, and it doesn’t include the psychic effects of taking on staggering amounts of debt in order to achieve that college degree. And so I thought that what could be a sort of novel element in our approach to the problems in higher education would be to create a big tent in which we had many different perspectives and in which certain truths emerge, but many more questions are presented.

Filmmaker: What was the aspect of the film that you found personally the most interesting, but because of the nature of trying to balance all of these issues, you may not have been able to go into as much detail as you would’ve hoped?

Rossi: The question of how college, not withstanding its great value as an engine of social mobility to produce graduates who make more money — not withstanding all that, it actually can still be a structural element in our society that perpetuates inequality. And Anthony Carnevale from the Georgetown Center [on Education and the Workforce] has a really fascinating analysis of this problem.

He basically goes so far as to say that for those who are white and wealthy, college is a great avenue to get better jobs. But for those who are financially disadvantaged and predominantly black and Latino, many of those students are directed to open access schools, which do not have the same ability to lead students into the middle class as certain other schools do. It’s a really complex socio-economic analysis that he has, and at one point we had it in a rough cut of the film and found that it was difficult to explain, particularly in narrative terms.

David Boone from Harvard, who was at one point homeless, we hoped that we could fit that into his storyline as well, but found it too difficult. But I think what’s cool is that the film is supposed to be a conversation starter. Frank Bruni wrote an op-ed in The New York Times in which he looks at this. He’s talking about Ivory Tower and the film is sort of his launch pad to then get into these questions of inequality.

Filmmaker: Were there any places that were particularly difficult to access? I imagine the Cooper Union people may have been somewhat protective of their image, no?

Rossi: A lot of that footage at Cooper actually comes from student activists, people who were actually with the students when they climbed up the stairs into the president’s office at Cooper Union. We had a combination of footage from the students and from our own interviews and from shooting in the building.

Trying to get access to Harvard was pretty time consuming. Being able to shoot in the classrooms and on campus is something that they typically don’t allow. They have told us that it was sort of unprecedented, the amount of access that we got, and so navigating that took effort. But in general, we found that colleges and universities were really understanding of the importance of making a movie about this topic, and we were able to go in and find students and faculty to profile.

Filmmaker: Was there anything especially difficult to make work in the cutting that maybe you had considered discarding, but ultimately found so important to the argument you were making that you ultimately found a way to do it?

Rossi: When the massive open online courses [MOOC] storyline emerges in the film it’s probably act four or something. I think that it’s naturally a moment where you hope that the Hollywood ending is about to emerge, and there’s so much enthusiasm with the founders of Coursera and Udacity discussing the promise of MOOCs. In a way, we wanted to preserve that initial sense of possibility, because that’s very much the way that the media treated MOOCs for all of 2012 and much of 2013. But of course the results at the San Jose pilot in the remedial courses that Udacity provided exclusively online were abysmal.

I thought that needed to be explored and presented in the film in all its failure, because the lesson is that students need human beings to be a part of their pedagogical experience. They need human instructors to give them support and we see that in action with Bunker Hill Community College, which is doing a class in computer science from edX, which is another MOOC provider. And it’s working much better there, because there’s an in-class instructor. But we realize that by presenting MOOC as one possible solution and then seeing them seeing so many important structural problems with the way they’ve been rolled out thus far would lead to an ending that was not the happy ending.

But unfortunately that’s just the reality of where higher education is right now. It would be false to present any one solution at the end, because there really is not one. I think hopefully the film provides a sort of call to action for student activists and for policy makers to try and change the system.

Filmmaker: Short of electing an entirely different Congress come November or somehow radically changing the way Washington does business, what can average people do to begin to unravel and solve the problems that you’re suggesting exist in this film?

Rossi: I think you’re absolutely right that the system requires a major overhaul along the lines of legislation like the Morrill act of the 1860s that created the land-grant universities, or the GI bill that FDR was able to pass, or even legislation like the higher education act of 1965 that was part of Lyndon Johnson’s Great Society. It seems equally clear that there is no legislative mandate in our current political climate. I think efforts at student loan debt relief and increased state funding for higher education are the best paths to pursue to try to improve the situation, as well as just broader cultural conversation about what students and parents want to get out of the college experience: hopefully educating prospective students that they should be choosing a school based on metrics like what the average student loan debt is, what the completion rate is at a school, even the employment statistics about how many students get jobs, versus which school has the better football team or the better party scene or more amenities.