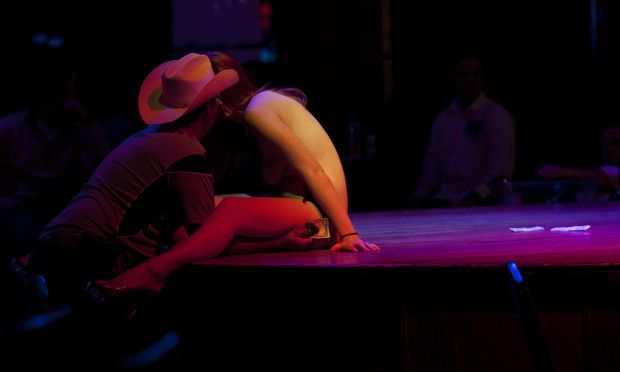 The Dallas Project is a film by Poppy de Villeneuve and Chloe Hall. It explores the vast and consuming strip club world of Dallas, Texas and the paradoxical lives of the people that make it turn. Below is a guest blog by female director Poppy de Villeneuve on making a film about women in an underrepresented and highly gendered industry. The Dallas Project is raising production and finishing funds for their film through Indiegogo.

I am in a moment in my life where I question what it means to be a woman at work. I’m pretty sure I’m not alone with these questions and know they are not just relevant to film but to many tasks woman are trying to engage in out there in the world. I personally struggle knowing which parts of myself to put forward at work, which parts to protect or keep to myself and the balance of being assertive and sensitive, wrangling where it’s acceptable to let that ego of mine shine and where to keep it in check. In the last couple of years I’ve had people react in all sort of ways when they are confronted with more assertive parts of me that they don’t expect or are somehow disappointed when I push back or want something to go my way. I’ve been having similar conversations with people in my life, male and female, about who they are for themselves and whom they need to show to the world, particularly at work, to survive.

I struggle here and want to pause and express that the nature of explaining one’s gender role leaves out the idea that gender is fluid within us and many people take on all sorts of identities within themselves, both male and female.

This project in Dallas, The Dallas Project, was started because the strip club and stripper industry was one of the few areas I felt created clear camps – men and women. Clothes on/clothes off. I had some judgments and hard feelings towards these girls. Why, because I felt threatened or offended? Was I afraid of the sexuality that is so on display in these clubs? Would I prefer to pretend that they are bad and I am good?

Since these women exist and are unlikely to go anywhere, I wanted to dig a little deeper. After talking to the house mom (the woman who looks after the woman in the locker room) on the phone and hearing the gentlest, most familiar Southern voice, I was hooked and was ready to get to Dallas. I spoke to the girls too, and a dialogue started opening up about people’s lives, their past and present and whom they imagine themselves to be and how the world sees them. I realized I not only had an opportunity as a woman to represent women and the complexity of their experience honestly, but to also potentially make a difference in some of the choices young girls make. I believe you need dialogue surrounding these “hot” topics so people can make better, more informed decisions.

My amazing producer Chloe Hall and I are looking to make an honest film about lots of very different women who surprisingly mirror back parts of ourselves. The chaotic environment of the strip club world has many twists and turns; we learn new terms every day – and we’ll leave them to your imagination – but to share a couple there are “office duty” and “club Monkey”.

There will be several themes in the film, including addiction, but the biggest one is shame. There seems to be a problem with shame in present society, and by not talking about our problems, vulnerabilities, and what we are afraid of, the problems become deeper. Not surprisingly, these girls have a lot of that to talk about, so a large goal is to do that in a more commercial environment, or as commercial as a documentary can be.

Shame is an epidemic and can haunt even the smallest things we do, whatever we believe in. One of our characters, Polly, was sexually abused as a child and became a stripper occasionally prostituting herself. She then met her husband, had twins and when the girls were about 13 she realized she was an alcoholic and was looking for answers. She found religion and now has a mission that helps women in the strip club industry think about different choices. Her idea is to love these women, right where they are, and not judge but offer a safe place to talk about it. She has an important role, along with her twins, in the film. But even within her own family we found shame had its own seat at the dinner table; it has been passed down to her daughters in an unusual and unique way.

Chloe and I question what it means to be women today – juggling children, making a living, being creative individuals and thinking about who we need to be for others – and we find ourselves looking at these women in Dallas as they seem to be helping us find our way.