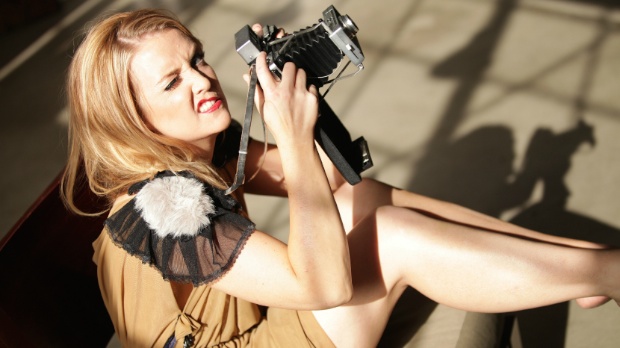 The following is a guest post from director, writer and actress Bethany Orr, whose untitled Iceland-set, psychosexual drama is currently raising funds on Indiegogo in a campaign titled “Iceland or Bust.” Click here at the link to learn more and to support the project.

Okay, so you’re not Zach Braff. The market is saturated with projects competing for attention and the hard-earned dollars of YOUR potential supporters. So why crowdfund in 2014? Hasn’t that train left the station? I mean, it’s a huge risk, what if you embarrass yourself? Crowdfunding is, after all, the quickest new way to get unfollowed and unfriended, right?!

WHEN DID ‘CROWDFUND’ BECOME A FOUR-LETTER WORD?

Crowdfunding. It’s not for everyone. Many were on the bandwagon and fell off, or got pissed off and are now disillusioned with the idea. “You learn a lot about yourself and the people around you when you crowdfund,” says New York director Christina Raia, who has run three successful crowdfunding campaigns across more than one platform. True dat. On the second point, here’s a status update that recently appeared in my Facebook feed:

Kickstarter, Slated, IndieGoGo; all crowdfunding for that matter are no longer a part of my vocabulary. And that’s a good thing.

Full disclosure: I am a filmmaker in the middle an Indiegogo campaign, so this friend could have been making a comment directly to me, but probably not. His feed, like mine, has likely become cluttered over the last year or two with asks from passionate crowdfunders. And he’s entitled to his opinion. What irked me is that he’s a fellow hustler, someone who works in independent film and is a vocal advocate of the business.

I chose to crowdfund for a number of reasons, the least of which was pride. And I admit I’ve had my own occasional allergic response to the word “crowdfund.” But the truth is, as a creative on the warpath whose eardrums are constantly vibrating with the word NO, I can’t afford to shut down to crowdfunding — as a creator, or as a supporter of others. I respect NO MATTER WHAT just too damn much.

CROWDFUNDING – WHAT EVEN IS IT ANYMORE?

Back when it was still two words, crowdfunding seemed to be this kind of magical formula everyone wanted to figure out. And the ones who had the guts to prepare well and go for it seemed to be rewarded handsomely. It was a mystery and a phenomenon. Still is. But the landscape has changed, and minds with it.

Hell, it’s been five years since the launch of Kickstarter and the rest of the world is still catching up. Here’s a dear Japanese Twitter follower attempting to explain the concept to her circle: 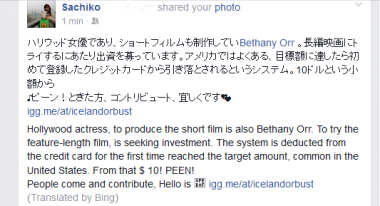 That is one of the best descriptions I have ever seen of crowdfunding. And it makes absolutely no sense. No wonder we have mixed feelings!

Thinking about running your own crowdfunding campaign? Here are some things to consider:

THE ECONOMICS OF CROWDFUNDING

Here’s why I won’t do away with crowdfunding until I absolutely have no choice: I’m a consumer. And creative things matter to me. It’s what I’ve devoted my life to. So tossing $20 toward a project I want to see get made and buying a ticket at the movie theater are really no different. One’s just delayed gratification (something our culture is really terrible at).

Think about it. Every time you spend a dollar, you’re casting a vote. That dollar gives that thing value. If we pull our dollars away from collaborating on creative endeavors that might otherwise not happen, we are hurting ourselves!

BUT WHAT IF PEOPLE DON’T GIVE ME DOLLARS?

Well, they will. Someone will. One, at least. And yeah, it’s nice to get money, we all want money.

But one of the primary reasons for crowdfunding has nothing to do with money.

The good news is that even an unfocused crowdfunder would have to work pretty hard not to find at least some of their own people. Yes, folks could easily get annoyed and some will push back but most will just ignore you because they’ve got better things to do than worry about your heart. Or, they’ll admire your pluck from a distance and watch as your campaign goes down in flames (the internet equivalent of bystander apathy), and then later they’ll ask you how it went. These guys will end up being your biggest fans later, once you’ve proven you’re unstoppable.

No matter how it might look from the outside, crowdfunding is a full time job. Can you work long hours without food or rest? “Be prepared for almost no sleep during the entire campaign run,” says Raia. “It’ll be unbelievably stressful but so rewarding when you make that goal.” 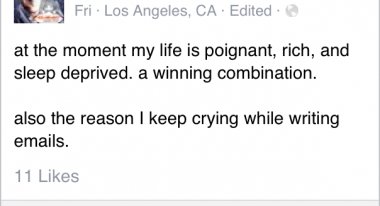 Be well-researched in advance, have made a list of people who know you and like you, and be as clear as possible about who you are, what you’re doing and what you want.

Know your audience. First go where the love is. Most suggest you start with friends and family. Your filmmaking community is a good place to go to early on. They understand the challenges of communicating a passion project, and how valuable even a small bid of support is. A targeted approach toward these folks and others like them can work wonders. Which brings us to to best case scenario…

HAVING AN EXISTING AUDIENCE

This means you have to have existing content. That’s right. You have a far greater chance of running a successful crowdfunding campaign if you already have something to give. I get it. It’s the old “have to get a car to get to a job and have to get a job to afford a car” paradox, but having proven yourself with existing work makes it clear you’re not asking for a handout. At it’s best, the crowdfund economy is a perfect two-way street. You are inviting people to have an experience with you and offering them something valuable FIRST. I strategized to release one of my short films online the same day I launched my Indiegogo campaign, and to link the two back and forth. It’s worked out pretty well — both my old and new fans have a way to appreciate what I’ve done on my own, and then I offer them the chance to support what I’m doing next.

Most importantly, you have to be willing and available to having the experience. People respond when you honestly and openly share yourself, not when you bombard them with spam.

I AM NOT A ROBOT

Having the courage to be yourself, and to be human — especially when things get crazy — counts for a lot. But you have to take it one day at a time. I’m so passionate about my project it makes me cry. I’m highly motivated and the urgency is there but I’m not desperate; I don’t know how but I trust that things will come through, that’s this is happening no matter what. It did with Agorable, my first crowdfunding effort years ago that by even the most generous standards was a dismal failure. But guess what? That film got made ANYWAY.

Fundraising is selling and selling is hard. Your local Mormon Temple or public radio station will tell you that. It’s especially difficult when what you’re selling is essentially yourself. It can be very discouraging. And when you begin to feel assaultive to be reaching out so many times about the same thing, that’s when it’s time to relax and remember who you are and why you’re doing this. The chances of you reaching your goal are infinitely higher if you’re enjoying yourself and projecting that. HAVE FUN. People like fun. A little humor will go a long way in your campaign, in your production, and in your life.

WHAT IF I EMBARRASS MYSELF?

Well, if that’s a big issue for you, don’t crowdfund. Unless you’re a big name with a popular body of work and a massive fan base, you have be willing to accept that might happen. You can’t take take yourself too seriously. The truth is, your campaign depends on you and there’s plenty you can do to make it work – but unfortunately no matter how hard you try, you might lose this round. There are no guarantees. But the good news is…

Filmmaker Josh Mann reported, “My Kickstarter campaign was… uneventful.” So he set up a simple website for people to contribute independent of a crowdfunding platform and focused on pointed reach-outs to a handful of folks in his circle he felt confident would back him. He raised his goal in a much shorter time than he would have otherwise, and it was a lot less work.

WHAT’S IT ALL MEAN?

Exactly. Veronica Mars and Zach Braff each exceeded their $2 MIL goals in a matter of days. Spike Lee had a bunch of rich friends pony up the dough for his $1.25 MIL Kickstarter project. And then there’s this guy… 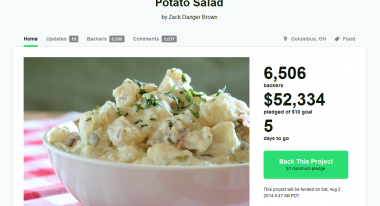 That dude slapped a picture and two sentences up as a joke and now he has over $50K. Magic!

There’s no formula to virility. But being focused, passionate and strategic still counts. If you can give a good chuckle, even better. Talent is a bonus.

Filmmaking at any level will cause you to question everything, most especially yourself. It’ll most certainly challenge your definition of success. According to Raia, “A lot of disappointments are in store but a lot of pleasant surprises as well…”

Known for her dark humor and fearless character work, Bethany Orr has crafted standout performances both in front of and behind the camera since 2009. She is an accomplished screenwriter and director of award- winning shorts, including Winner and Agorable, and was one of a handful of filmmakers chosen by Werner Herzog for his 2012 Rogue Film School. Orr can be seen next as JILL in the upcoming feature film Excess Flesh, and in Iceland this fall developing her first feature as writer/director. Check out her campaign here.