A Series of Visitations: Alexander Sokurov’s Days of Eclipse 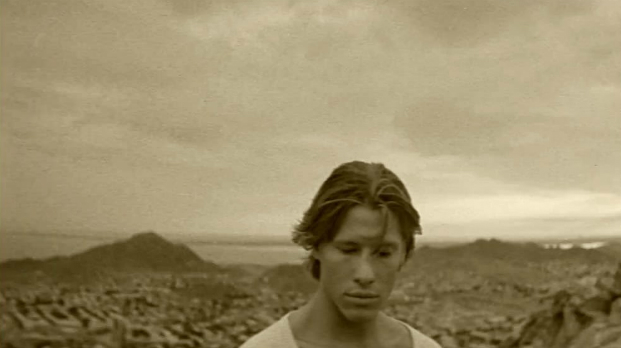 The Strugatsky brothers novel upon which Alexander Sokurov’s 1988 Days of Eclipse is based has the following fairly mind-blowing premise: a group of scientists in Moscow find their research in various fields frustrated by inexplicable events, and conclude that the universe is deliberately sabotaging them in an attempt to preserve its mysteries. Sokurov’s film has plenty of the inexplicable but none of this throughline — it’s parsable only with difficulty and guidance from external sources — and relocates the settting from St. Petersburg to Krasnovodsk, Turkmenistan. Krasnovodsk is now Türkmenbaşy, having reclaimed an indigenous name in the post-Soviet era.

This relocation has inextricably intertwined personal and political significance, one which Sokurov may not have not consciously explicated to the degree his movie does. As he explained in an interview, “My childhood, since my father was in the army, took place in that very same southern town in which we shot the film. I wanted to express on screen all the feelings that remained with me from my encounter with that natural and social milieu […] where there was a complete cultural vacuum, which could reduce even the most unassuming person to despair.” What registers on-screen isn’t a lack of cultural stimulation (whose culture, who defines that, etc.), but a strong sense that neither the camera nor the protagonist should be present; in a better world, this film wouldn’t have the opportunity to exist.

In Eclipse‘s opening montage, Sokurov’s camera trains its eyes on, among other things, indifferent camels, hospital residents (possibly lunatic?) sitting on a porch and swatting away flies, and a woman who closes the door to her yard on her child, but not before glaring directly at the camera. Our near-parodically White Russian point of ostensible identification is Dmitri Malyanov (Aleksei Ananishnov), all blond hair, perfect cheekbones and dreamy casual athleticism. When we’re introduced to him, he’s in the zone, typing away as the camera pans over his desk’s contents, with a smattering of photos presumably serving as a quick condensed overview of his background, though nothing is that simple. The insistent ringing of a telephone reminds us that we’re perhaps in a different kind of Zone — the irrational realm of Tarkovsky’s Stalker, also derived from a Strugatsky novel, where once you arrive at the potential moment of transcendence you could still be interrupted by an irrelevant phone call, as happens at that film’s climax.

Malyanov’s studies — on the relative health of children in the town of Gorki born to families of different religions — never quite get fleshed out; we see him receive a lobster for obscure research purposes, first glimpsed with only its claws perceptible through an opaque-ish block of jiggling gelatin. (There’s an anticipation here of Sokurov’s Faust, an unhealthily obsessive young scholar in pursuit of Truth through study of the grotesque.) What Malyanov evidently desires is to never return to Russia, for which he claims to have no nostalgia. The film’s trajectory suggests that he is, without possessing any active agency or malevolent intent, an agent of colonialist oppression in its final days — that his very presence is not as neutral as he’d have it, especially contextualized as it is by the constant visible presence of the Russian army.

The plot, such as it can be described, is a series of visitations Malyanov experiences, culminating in no particular resolution. The primary agent of Malyavno’s dawning awareness is his only real friend on the ground, Sacha Vecherovsky (Eskender Umarov), whose parents were among the Crimean Tartars deported by Stalin in 1944, by no means a unique instance of injustice levied upon the USSR’s satellite republic populations. Upon hearing his story, Malyanov’s understanding of his locale is visibly changed, but there’s nothing he can really do about it: he ends as he began, a part of the colonialist population whose presence can’t be uncharged.

To underline this, Sokurov uses one of his most consistent practices: the simultaneous deployment of multiple sources of music, with Russian nationalist staples from Glinka et al. butting up against both music identifiable as “native” and electronic disruptions, pitting two cultures’ sonic self-identifications against each other, mediated by other disruptive elements not tied to either. Sokurov commonly does this sort of audio stacking, as if John Cage were in charge of the score and produced one of his aleatoric multiple-radio compositions. Here, the suggested tensions are easily understood and hence less of a fly-buzzing irritant than usual.

It’s an equally dense film visually, alternating “normal” color with gold-tinged scenes; the alternation is seemingly random, introducing yet another buffer to full comprehension. The field of vision is often crowded, with a particularly notable shot making a key plot point impossible to register at first. There’s been a killing, but we can’t see the body, only a flat filled with an impressive number of police authorities, standing around and mumbling at each other rather than visibly performing evidence-collecting work. The body is only seen when, after multiple disorienting dissolves to pass the time, they’ve all left. Indoors, the foreground is often disrupted with these kinds of hedges, while outdoors Malyanov is a dot against disturbingly expansive landscapes. There’s never a sense of stability or disorientation, only displacement.

This sense of constant dislocation relates to those post-colonial blues mentioned above, which sits strangely when juxtaposed against some of Sokurov’s latter-day work. I’m thinking particularly of 2007’s damn-near-disgraceful Alexandra, in which iconic Russian opera singer Galina Vishnevskaya is a cute old grandmother who goes to Chechnya to visit her Russian army grandson. The film’s message, intentionally or not, is pretty awful: never mind the rights and wrongs of the struggle, let’s all stop the madness and put down arms rather than upset the salt-of-the-earth granny disturbed by all the chaos. This putative attempt to trascend vulgar politics (don’t be mad, let’s find our common humanity!) is viewed from a decided place of nationalistic privilege (among other things, there’s strong evidence that the Russian government staged the bombings that served as justification for the second Chechnyan war). Days of Eclipse is a fascinatingly oblique film, one whose “difficult” nature has not been lessened by time’s passing: it seems as modern, alienating, and UFOish as it must have in 1988, its innovations unassimiliated, and it’s must-see viewing. The question it raises in passing is how the same political intelligence could make both of these films.

Days of Eclipse plays tonight at 9 at Film Society of Lincoln Center as part of its series “Strange Lands: International Sci-Fi”.