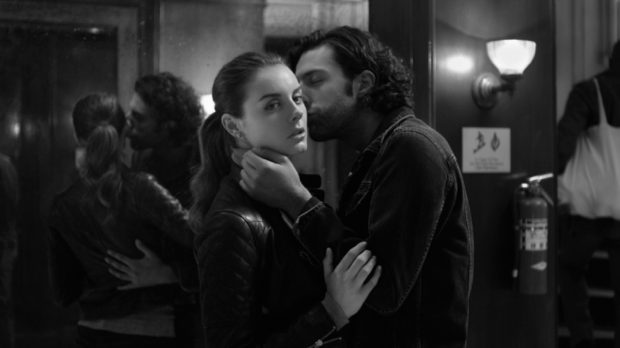 One of David Fincher's Gap ads

Behind the scenes of David Fincher’s new Gap ad campaign, the logistics of growing the beef industry in Kazakhstan, a look at illegal logging in Indonesia and more in this week’s links round-up:

• Yesterday the Gap released four new ads directed by David Fincher. Mashable’s Todd Wasserman has the videos and quotes from Gap Global CMO Seth Farbman on Fincher’s typically exacting work process. One spot had the actors running 50 to 60 times up a set of stairs (the audition included ten minutes of running). Fincher lived up to his end of the bargain by creating “a new camera out of carbon fiber to track the actor as he ran up the stairs.”

• Now here’s a proper opening sentence: “Beibit Yerubayev stays up at night thinking about vaccinations and artificial insemination.” For The Moscow Times, David Trilling files a fascinating dispatch on Kazakhstan’s attempts to revive its beef industry. It costs money: “Kazbeef, for example, sources all its purebreds from Global Beef in North Dakota. The cows arrive packed, 180 at a time, in chartered Boeing 747s. The flight over runs between $360,000 and $580,000, says Global Beef co-owner Daniel Price.” But with Russia’s ban on importing beef from countries that oppose its actions in Ukraine, there’s a valuable new market to hopefully be tapped for premium Kazakh beef.

• More Trilling on Kazakhstan, this time for The Guardian: “An advert featuring an image of Russian poet Alexander Pushkin and Kazakh composer Kurmangazy Sagyrbayuly kissing has sparked widespread complaint in Kazakhstan.”

• India’s chicken consumption rate is increasing at about 12% a year as more of the country abandons vegetarianism. “They aren’t just eating it, they are also talking a lot more about it,” says Indian food writer Rushina Munshaw Ghildiyal in Mallika Kapur‘s report on the country’s changing eating habits. “It’s cooler to talk about being a meat lover than a vegetable lover!”

• Related: a New Delhi-based think tank claims the Indian poultry industry is misleading the public about its use of antibiotics.

• “The Baghdadi Jewish community came to Kolkata during the Raj,” writes Subhro Niyogi in the Times of India. “Founder Shalome Cohen, a trader, arrived on August 4, 1798, from Aleppo, Syria via Surat and took up residence in Murghihatta with his retinue.” With the Jewish population in Kolkota now down to the dozens, one Jael Silliman has created a digital archive on their history.

• The AP has a good obit for the late William Greaves, perhaps best known now for 1968’s Symbiopsychotaxiplasm.

• At The Appendix, Dan Salas contemplates the longstanding role the ever-pending apocalypse has had in the American imagination. There are illustrations and arresting details, like this bit: “In his work on popular eschatological beliefs in early twentieth-century Ohio, folklorist Newbell Niles Puckett recorded ‘cows lowing at night, bad thunderstorms’ and the sudden fashion of women wearing ‘glass high heels’ as a sure indication that the end times had arrived.”

• “An estimated $2 billion of government revenue was lost annually in Indonesia between 2003 and 2006 because of illegal logging, corruption, and mismanagement in the forestry sector,” reports Robert S. Eshelman. In this piece, he travels to a small village where 80% of the residents illegally harvest wood. Government mismanagement, economic disenfranchisement and police corruption all enter into it.