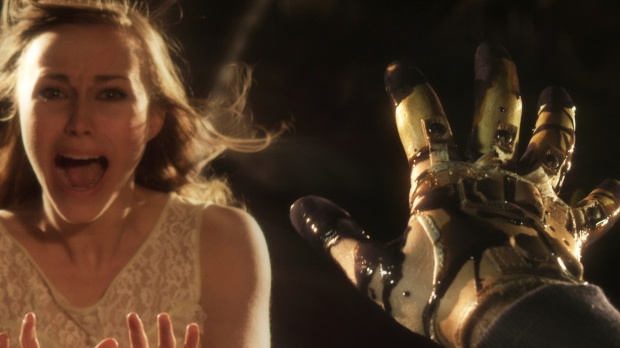 by Scott Macaulay
in Directors, Interviews
on Sep 11, 2014

With the recent Berberian Sound Studio and now The Editor, we’re in a bit of a giallo revival. Or, more accurately, the gory, gloriously art decorated Italian horror thrillers of the 1970s have inspired a new generation to pay homage in the form of their own meta-commentaries. Interestingly, Peter Strickland’s Berberian Sound Studio and this year’s Toronto-premiering The Editor both feature post-production crew as their protagonists. In Berberian Sound Studio, it was a foley artist; in The Editor, Matthew Kennedy and Adam Brooks’ horror comedy, our hero is a once-vaunted picture editor who, following an accident, now must wield his Steenbeck one-handed. When actors in his films are found murdered, he must shake the detective on his trail while we make sense of the genre’s typically convoluted plotting. Brooks and Kennedy play the editor and detective, with supporting turns from Udo Kier and Paz de la Huerta.

The Editor, co-written by Conor Sweeney, premieres Thursday, September 11 at the Toronto International Film Festival in the Midnight Madness section. Below we ask writer/directors Brooks and Kennedy about their favorite giallos, why giallos matter today and what they learned working with Troma.

Filmmaker: As cinema, the giallo films have so many distinctive elements, from music to production design to their twisty narratives. For The Editor, what element of the ’70s giallos did you try to reference or replicate? Was this process difficult?

Kennedy: We tried to reference and replicate as many giallo elements as we could. There are a lot of neo-giallo films these days that sort of go halfway in their reference to the genre, and it was important to us to make the experience as complete and authentic as possible. The complete giallo experience means shooting m.o.s. (without sound) and dubbing the dialogue in post, lighting with super saturated colours, doing take after take to get a zoom just right and featuring that distinct black leather glove-wearing, straight razor-wielding killer. As far as music goes, having The Editor theme composed by Claudio Simonetti (the godfather of giallo scores) certainly helped us to set the stage for all the additional musicians we brought on to score the film in beautiful ’70s synth glory.

Likely the most difficult element to replicate was the m.o.s. shooting model. Building all your audio from nothing in post is an extremely arduous and time consuming process. Adam will also attest to the fact that trying to edit and find the rhythm of a scene that is void of any audio is no easy task.

Brooks: Our score is more than just ’70s/’80s synth, though. There’s a lot of late ’60s Bava-type instrumentation and a touch of Badalamenti-type stuff in there too. Alongside the very contemporary Carpenter Brut music, the Badalamenti-styled music might seem a little anachronistic, but more importantly it is intense and sometimes overpowering. A lot of our favourite giallo music can really steamroll a scene. It’s often much more foreground music than background music.

Filmmaker: On your Indiegogo video you talk about having started this film on a DSLR but wanting to start over again with a different camera. Did that happen? Talk a bit about your production process.

Kennedy: We did make the jump from DSLR to RED on this film though still had to shoot on cheap SLR lenses. Our last film had a budget of under $10,000 so shooting any other way was not an option. With the help of our Indiegogo supporters and a grant from Telefilm Canada we were able to increase production value on all fronts. We purchased a RED One camera that Adam and I learned to use over the course of a few days and took over photography for the majority of the shoot. Since our budget was so low we were still not able to work on a traditional shoot schedule for more than nine days and had to haul the camera gear around ourselves month after month shooting new scenes as locations and actors became available.

Brooks: Our production process has been very D.I.Y. – pack up the camera gear and the lights in the back of your car, pick up the actors, drive to the location, set up the lights, hope you didn’t forget a costume or prop, hurt yourself trying to carry too much at once, then direct like a tyrant for hours, get exhausted then delirious, start laughing at everything and coming up with bizarre last-minute additions to the scene, pack up, drive actors and grips home, upload the footage to your computer, edit, talk to a musician friend, put some music in, rinse and repeat, etc.

Filmmaker: You describe your film as a horror comedy. What’s funny about giallos?

Kennedy: What isn’t funny about giallos? I’m sure for the most part, all giallos are (or were) meant to be completely straight but as they become more dated and the style more foreign to today’s audiences the genre becomes rife with unintentional comedy. The pink tempura paint blood, the papier mache special effects, the over-the-top performances and the bizarrely commonplace mistreatment of women are all staples. They were films made by Italians with the intention of appealing to the larger North American market and thus it’s a sort of foreign interpretation of North Americans that just comes across as stilted and disconnected. There’s a real charm and an extremely identifiable quality to all giallo films, and that is what drew us to them in the first place.

Brooks: I think the blood was a lot more orange than pink so let me begin by apologizing for Matt’s answer. I think a lot of the gialli I like the best had to know they were absurd… They couldn’t have been created entirely with tongue-out-of-cheek. The nonsensical endings to Inferno and Tenebre come to mind as well as the close up shots of heads hitting cliff sides in both Don’t Torture a Duckling and Seven Notes in Black, or how about the killer’s Donald-Duck voice in New York Ripper? I think these absurdist twists are both hilarious and disconcerting, and therefore extremely attractive to us as filmmakers, but it’s important to explain that we aren’t laughing at these films (most of the time). I’m not amused by their ineptitude, far from it. The focus pulls don’t always hit their mark and the dubbing isn’t always spot-on but these films remain beautiful, surreal and engaging. I don’t want to sound too precious about it. I suppose I find some of the most boring detective/mystery-style writing to be laughably inept but it’s all part of the stranger, bigger picture.

Kennedy: I have always been partial to Suspiria and The Beyond. I know they’re obvious choices but they’re popular for a reason. They have great scores, great photography, great gore and make no sense whatsoever. I think our love for both of those films comes across pretty clearly in the editor.

Brooks: It’s a long list, but Don’t Torture a Duckling and Tenebre are at the top of it.

Filmmaker: What did you learn working with Troma on Father’s Day that influenced the way you approached The Editor?

Kennedy: What we’ve learned from both films, really, is that nothing beats working with people you know and trust and who want to help you make a good movie. With Father’s Day the budget was so low we didn’t really have the option of bringing in any outsiders to help with production, and, in a way, that’s a good thing. When you have nothing you’re forced to work with people who really want to help and who really care about the project because what other reason do they have to be there if they’re not being paid? With the editor we still relied on so many friends and family to help us for no monetary gain whatsoever and they were all fantastic. The budget also allowed us to work with a lot of new people, a lot of whom were fantastic as well. But when you open up your project to a larger team and start to share responsibility it’s a tough learning experience. You often long for the days of doing it all yourself. That said, we would love to not do absolutely everything ourselves at some point in the future.

We’ve also learned to take our time with everything on the business side of things. Don’t rush anything. Read every contract twice and then get a lawyer to read it two more times.

Brooks: I think we developed our lighting style on Father’s Day which had previously been non-existent. We also learned to go into a film knowing it’s going to be a very painful process.