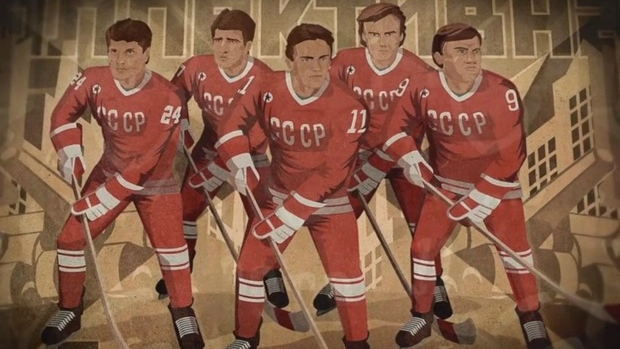 Gabe Polsky’s first documentary Red Army briskly reconstructs the story of the fiercely dominant Soviet hockey team of the late ’70s and ’80s. Out of the team, five players coalesced as an unbeatable combination, and their interviews form the backbone of Polsky’s story, fleshed out with a smart selection of archival footage from both sides of the Cold War. Teasing out hockey’s role as a not-so-subtle worldwide representation of the USSR’s success and masculine pride (per a song sung in archival footage by a boy’s choir, “cowards don’t play hockey”), Red Army is also propelled by the light director-subject sparring between Polsky and hockey legend/former Russian Minister of Sport Slava Fetisov, first shown flipping the camera off and checking his mobile rather than attending to the director’s questions. The film makes its Canadian premiere at Toronto tonight; it’s already been acquired for distribution by Sony Pictures Classics.

Filmmaker: During your time playing hockey at Yale, what position were you and did the style of Soviet play you admired affect how you played?

Polsky: The ’87 tapes and some of the other footage of Soviet play was incredible. It was like watching aliens on the ice. You could almost compare it to different styles of martial arts: one is karate, one is jiu-jitsu. It was a revolution in creativity in hockey and in sport. A lot of it is about puck possession and creativity on the ice. It’s comparable to the way Barcelona played soccer. It’s a less brutal game and more about finesse and vision.

It was a collective creativity, so it wasn’t about one individual skating through everyone. It was about everybody playing together and passing, and if they didn’t see an opportunity to score they would turn back and create another opportunity. There was a lot of weaving on the ice. The training that they did was 40 years ahead of everybody else. They would do a lot of creative exercises where they would carry each other on their backs and spin around and carry tires and rocks and walk on their hands, a lot of balletic exercises. They would work on their psychology and play chess. It was just incredible.

Everyone who saw them play could recognize how incredible it was. I think it’s a game that’s been lost in this era, where you turn on a hockey game in the NHL and it’s just guys slapping the puck around. There’s very little of this kind of unity. In fact, I tried to show my girlfriend the Stanley Cup finals this year and I just wasn’t there. She was like, “What’s going on? They’re just slapping the puck around and hitting each other.”

I think the most important thing is applying this not just to hockey but to life in general. In order to evolve and revolutionize any industry or craft or whatever it is, you’ve got to think outside of the box. These guys took hockey really seriously. The coaches had to go through schooling and learn anatomy. I don’t want to say it was a science, but coaches in North America, they don’t have to do any of that. They just say, “I want to be a coach,” and then they just wing it. The Soviet coaches encouraged creativity, whereas North American coaches, I don’t think they make that a priority. It’s systematic, there’s no life to it.

I played mainly center forward, but sometimes I played on the wing as well. When I was at Yale, the coach wasn’t really kind of encouraging of that and didn’t really appreciate that aspect of the game, and so it was a constant struggle. Ultimately I kind of lost faith in the game, so it wasn’t a great ending to that career.

Filmmaker: Did you try to select illustrative clips where the team’s achievements would be obvious even to hockey novices, and what were your criteria?

Polsky: This is a little bit of a tangent, but it’s interesting because more often than not, after screenings I have people come up to me and say how amazing it was, that they were never hockey fans but after seeing this movie they can appreciate what hockey’s all about and how incredible it is. I think when people see an incredible performance, whether it’s ballet or a performance or sport — when someone does something beautiful in a collective way, it’s very obvious. Anyone can appreciate it. I know hockey very well. I really appreciate that part of the game, because I know how hard it is, and you have to really think, you have to have vision to play that way. It’s not easy, but it looks easy. I looked through a lot of footage and basically selected the plays that demonstrated these ideas of beauty, incredible puck movement, skill and creativity.

Filmmaker: Was getting archival footage from Russia difficult?

Polsky: The Russian footage was a little bit tricky. I had a researcher in the US, one in Russia and one in Canada. There’s a couple of big archives in Russia, but they don’t keep a lot of the footage in great shape. A lot of it is 35mm or 16mm in canisters. I went over there once. I would tell them what I’m looking for and they would look at that era in hockey. I probably looked through 30 canisters. They had a Steenbeck and you look through it. There was a ton of material. The part that was most challenging and overwhelming was just trying to get through a small part of it. I was excited about how much stuff there was but it became kind of burdensome.

Filmmaker: As the son of Russian immigrants, do you speak Russian fluently enough to conduct interviews in it and did you think about doing that with Slava? It’s obviously going to change the dynamic a bit if you conduct his interviews in English.

Polsky: I do speak Russian, but I’m not great. When I get into really complicated ideas, it’s very difficult for me to express myself. Some of the players didn’t speak English as well, so I spoke some Russian to them and had an interpreter, but I understand a lot more than I could speak. With the main character, I wanted it to be English, because first of all it opens up the market for the film, I think. I also wanted to be able to express what I was trying to get from him more clearly and deeply, so I spoke English to him, and he understood because he had spent a lot of time in the US. Sometimes his English would get a little thick, so I had to subtitle it a little bit.

Filmmaker: As Minister of Sport, Slava was working under a leadership including former KGB members, a political continuity you leave as subtext.

Polsky: It’s pretty clear that I wanted to stay a little bit neutral and give the audience the facts of what’s going on now. I think it’s incredibly interesting. It’s hard to even draw an opinion. Home is home for people that have grown up in a place and a system. That’s what’s they’re used to. These are the people they grew up with and understand, the culture that they know very well. They might have good intentions, you know, to make the world and Russia a better place. The country did change, they’re respected, they’re considered heroes in that country. They might feel like they can make a big difference?

It’s important for young people, for coaches, to encourage creativity and think deeply about sports. Young people learn a lot from sport. They may not play college, Division I, but they bring these experiences to whatever they do later in life, and I think it develops the individual. I think when you think about it deeply and creatively, you have the ability to influence kids later in life in a good life. That was one of the positive things that came out of this Soviet system, although there’s a major price to pay in a lot of ways. The incredible beauty and art that came of it — there’s an important lesson behind the sport.