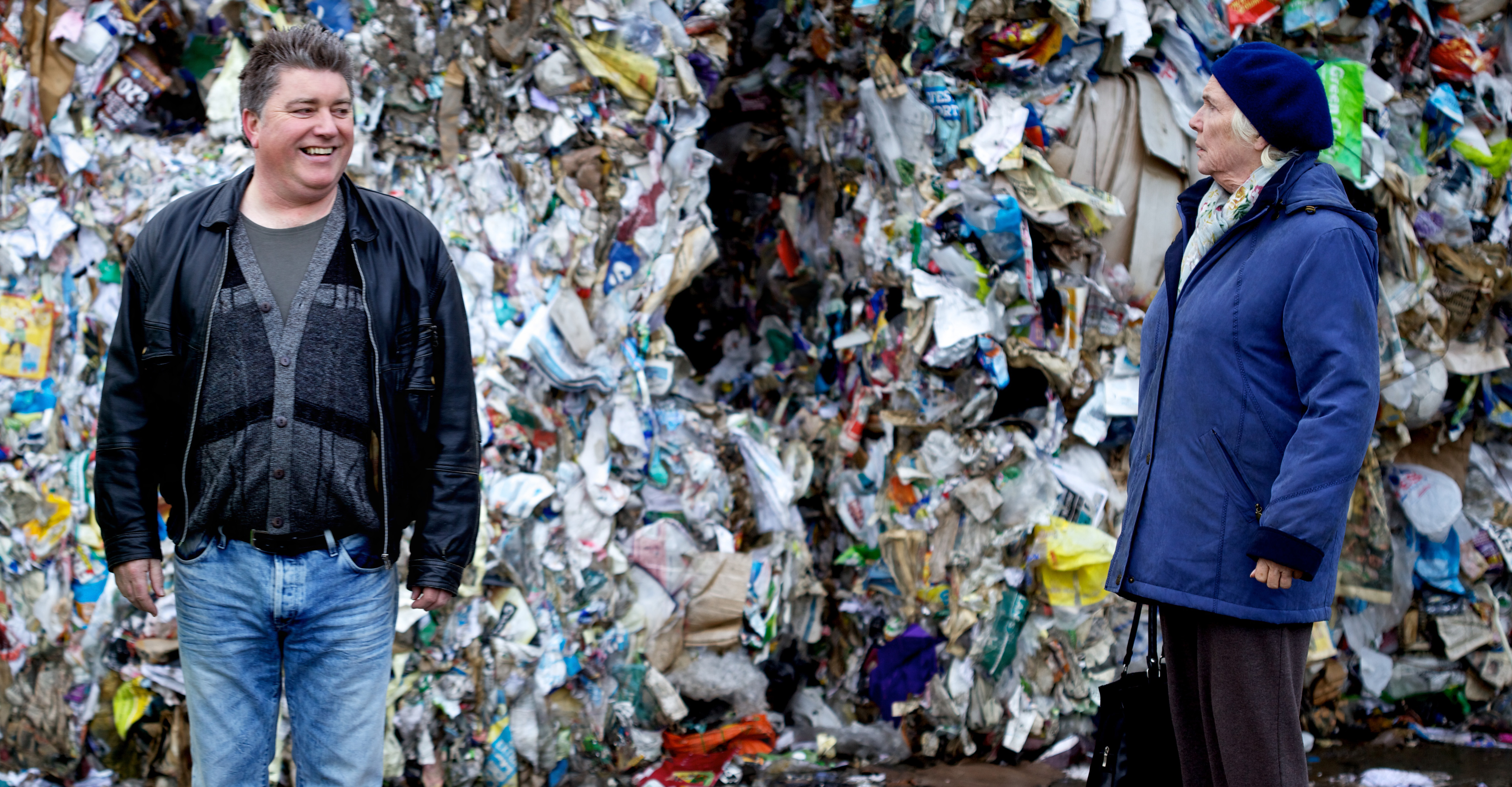 Pat Shortt and Fionnula Flanagan in Life's a Breeze

Life’s a Breeze has nothing to do with an illusory sense of existential ease and simplicity. It is in fact a brand name that is heavily embossed on the exterior of a small plastic room deodorizer, which screws into a door jamb — or several, like in the revamped two-story flat of 79-year-old Nan (Fionnula Flanagan), an ornery but soft-spoken hoarder. In the first of several badly calculated surprises, her loving but smilingly mercenary middle-aged children throw out piles of moldy papers and replace unsalvageable furnishings and tchotchkes with up-to-date Ikea and such: recognizable brands.

The idiom is itself ironic, for once Nan reveals that she had stashed a million euros in a tossed mattress, her children’s lives become windswept: a series of chases in town, over landfills, and at recycling stations in pursuit of her involuntarily discarded home safe. Once word gets out, the tabloids go wild and TV news depicts a zombie-like public scrambling up and combing through mounds of detritus.

Writer/director Lance Daly’s last film in his native Ireland was 2008’s disarming Kisses, which he also scripted; he was cinematographer on both widescreen movies, both of which are set in a full-on prole Dublin. (His fine 2012 thriller The Good Doctor, written by John Enbom, was a whole other kettle of fish, an American indie which took place in upper-middle-class southern California.) In the latter film, Daly shifts seamlessly between veins of unchallenging humor and dark menace, some of it almost begging for social critique. The mood is enhanced by the music, composed by Daly, Declan Quinn, and Eugene Quinn, comprised of repetitious piano keys sounding like a tickled drone or lilting mixed piano and guitar.

Daly tweaks a thin comedy plotline as a means to two overlapping ends: probing the inconsistencies of familial love, especially along generational lines; and developing some kind of metaphor to fit the Irish who came of age before, during, and after the Celtic Tiger (1995-2008), the sudden economic boom that dramatically transformed an entire society before collapsing just as quickly into a hard-hitting slump. Some critics in Ireland have called Life’s a Breeze a recession comedy.

Nan still has a son living at home: overbearing, on-the-dole Colm (comedy actor Pat Shortt, in photo at top with Fionnula Flanagan); even his mum labels him “thick.” Shortt is a big box-office draw on home turf, his face featured on the film’s posters next to that of the iconic Flanagan, who underplays Nan as slightly crippled and measured in thought yet still astute. Missing here but equally deserving top billing is red-haired newcomer Kelly Thornton, who, in the role of Emma, Nan’s 14-year-old granddaughter, is also perfectly subdued.

The film begins with Emma dreading the daily visit to Nan’s to bring her the newspaper, then charts their gradual bonding until the poignant, unanticipated climax. We know that the two have transitioned from mere relatives to BFFs once Emma graciously dons the fiercely ugly cap with embarrassing ears that Nan has knitted for her. Colm and his siblings, in and out of crisis over the lost bedding and its contents, are too self-absorbed to pick up on their mother’s emotional needs. Sure, they fix her place up and (inappropriately) send her a stripper fireman for her 80th birthday, but their minds never veer far from their inheritance.

The skip-a-generation connection between Emma and Nan makes perfect sense. Nan spent most of her life before the big bounce and thud; Emma, after. The siblings’ adult years were smack dab in the middle of it. It’s no wonder Nan considers them spoiled, and that they are ill-suited in the present for finding employment and just getting themselves together, period.

Emma is too young, Nan too old for grand material expectations. The search for money in a mattress becomes for them just another game, a treasure hunt. They sneak out with the siblings’ marked-up map of dump sites, slowing down only for a good laugh at the top of a trash heap, or for Nan’s tender confessional about the fleeting moment of love she felt for her husband at the end of their honeymoon, before he became an alcoholic. Mind you, the two are 66 years apart.

Daly takes great pains to stress that no matter how high the ups and how low the downs, family remains first priority. Nan takes in all of her kids’ shenanigans, but she would never turn her back on any of them. Here squabbles are part of the day to day. Life can never be a breeze when irreconcilable differences are a given.