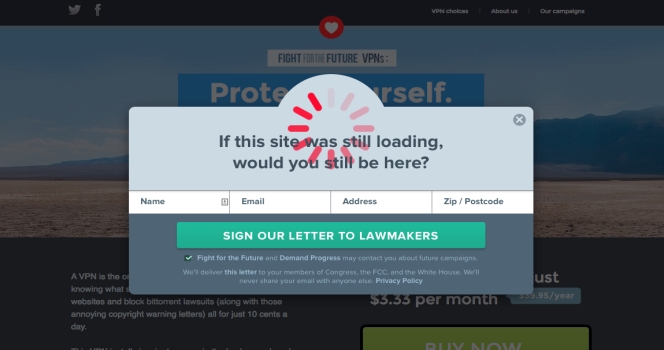 Wednesday afternoon, I clicked on a Vimeo link and was greeted by an airtight pop-up. In order to pass on to the video, I had to enter my cell phone number and zip code. I complied, and not a second later, I received a call briefing me on talking points of the FCC’s revision to the Open Internet Order — which would allow broadband providers to charge sites for guaranteed service — and was then connected to senator Kirsten Gillibrand. Wednesday, September 10, marked the technical end to the public comment period of the FCC’s detrimental potential amendments to the net neutrality act.

To mobilize the public on this date, Vimeo, Netflix, Kickstarter, VHX and over 10,000 websites banded together for the “Internet Slowdown,” an imagining of a post-apocalyptic WWW, in which economics dictate access. Anthony Kaufman surveyed a handful of CEOs (including Vimeo’s Trainor and VHX’s Wilkinson) in our Summer issue, with the majority agreeing that the FCC’s posed regulations would hamper the opportunities online platforms afford independent filmmakers. Said Fandor founder Dan Aronson, “If we have to spend more money to deliver the content to end-users, it’s going to have to come from somewhere — either our piece [of the revenue] or the filmmakers’ piece, or we’re going to have to pass it along to consumers.” The measure wouldn’t just alter the speed at which you consume content, it might limit the availability of content altogether.

According to the advocacy groups behind the Slowdown, as of 10 pm EST on Wednesday night, Congress received more than 2 million calls and emails, and more than 722,000 comments were submitted to the FCC, who will post their open meeting agenda when they’re ready to vote. While they’re expected to reach a decision at the end of the year, you can continue to submit comments by clicking “submit a filing” on their website, and entering 14-28 into the proceeding number.