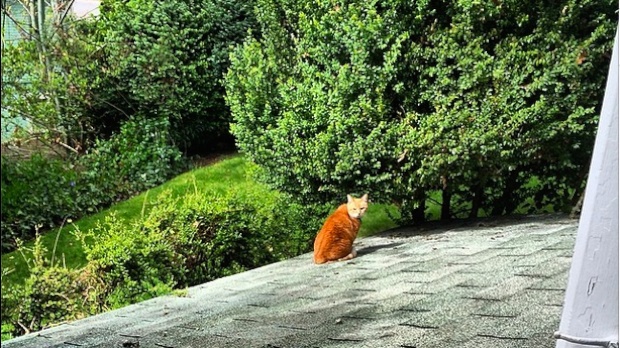 by Iyabo Boyd
in Filmmaking, Screenwriting
on Sep 25, 2014

Currently featured on Filmmaker‘s curated Kickstarter page is Forever Ally, a short film by Iyabo Boyd. In this guest post, she writes about her process adapting a work of poetry she discovered one night at a reading. Check out her campaign and consider donating; it ends October 2.

Forever Ally follows exchanges between a gay black man named Ronaldo and his recently deceased cat named Ally. Told primarily through lyrical missives between heaven, earth, and Ronaldo’s cat-scratched sofa, the story and characters are unique, offering a nuanced, complex, and genuine approach to ruminations on death, friendship, and opening oneself up again. I adapted from a set of moving poems by writer Ronaldo V. Wilson.

I met the real Ronaldo on one of those New York days that you just feel completely pent up and overwhelmed, and you just want to get the hell out, but I couldn’t that day for whatever reason. A friend invited me to a poetry reading at the New Museum, and I thought, well at least it’ll get me out of my apartment. At the reading, poet Ronaldo V. Wilson performed the full Ally Letters poem, and it completely set me free.   The performance was weird and familiar and deep, moving me from laughter, to introspection, to tears, and finally, release. Might sound cheesy, but it was truly one of the most inspirational moments of my life, urging me to reach inside myself and push off the weight that made me feel so oppressed in the city that day. Most importantly, it re-filled me with the urge to create, and I approached Ronaldo about turning his poems into a short film.

Almost immediately though, I launched into pre-production on a feature I was producing called Sun Belt Express. It was my first feature, so it consumed most of my energy outside of my day job. Somewhere deep in my consciousness though, Ronaldo’s poems sort of planted themselves; my memories of the performance itself and the feelings I experienced during it slowly morphed into its own thing. It wasn’t until nine months later after the feature was shot and I came back to the poems in earnest did I realize that the story in my heart was different than the words on the page. I then had to decide if I would adapt Ronaldo’s story, or mine, and eventually fell somewhere in the middle.

I started by re-watching the performance I’d been to, which luckily someone had recorded and posted to YouTube. It was a visceral experience once again — I could even hear myself in the video laughing and sighing at certain points. I read and re-read and re-read the written poems, which Ronaldo had sent to me. I realized the text was too long at nine pages of dense poetry and needed to be simplified to make a powerful short film that felt deep but not heavy. I aimed for the coveted perfect short film length of 12 minutes.

My first few drafts were pretty radical, taking themes of the Black body, cruising, and the dramatic death of this cat at the forefront of the story, large sections of the poetry still intact. I wanted to make something that captured Ronaldo’s spirit at the reading — a profound wildness, depth, and F-U to normative society and storytelling. Since the poetry was primarily told via voiceover though (letters back and forth between Ronaldo and the cat, Ally, writing from the grave), there was too much talking, not enough action to fill the the monologues, plus scenes were telling and showing at the same time, which took the old film school adage to new heights.

Somewhere in here I realized that I wanted to do more than just provoke and question and complicate, though all worthy pursuits — I wanted to tell a story. A story of unusual love and friendship, of introspection and growth, of magic and re-connecting. That’s when I started attacking the structure over the text. I cut away all “non-essential” bits of poetry, focused on the scenes as a whole, and spent months rearranging what happens when, why the timing mattered, how the characters changed based on the different structures, and how the audience saw the whole thing differently. Since I wasn’t writing from scratch, it was more akin to how a documentary editor plots out the footage they’ve gotten to formulate varying storylines that have the potential to alter the whole film.

I finally thought I’d found a format that worked, but couldn’t see it with a clear head anymore (I was going a little crazy), so I had a script reading with about 20 friends and strangers. I was incredibly nervous, but to my surprise they loved it and were passionate about the tiniest elements that I didn’t even recognize. The reading was a huge boost to my confidence about the direction the script was going, but applying the two hours of feedback I received seemed daunting. I took about a week’s break to not think about the project so I could come back to my draft and their notes fresh.

The readers felt the balance between Ronaldo and Ally was uneven, and needed clarification on who was the main subject. I took their suggestion and re-wrote the whole script from Ally’s point of view just to see how it affected my approach. It was an interesting process, and though I didn’t end up keeping that change, the exercise helped me see Ronaldo in a whole new light and get a stronger sense of what Ally’s purpose was. It also made me realize that I needed more of Ally, that she’s sort of his guardian angel. I went back to the original text and the cuts I’d made and found some great moments. I also brought Ally into the film earlier, letting go of trying to “surprise” the viewer by her response to his first few letters. The readers said, “Ally is the kind of girl who would definitely write back right away.”

The biggest hurdle was the ending, as all endings are. How this film ends really defines what the whole thing is about, and I felt the one I had didn’t actually connect to what the characters were going through. There is a symbolic moment near the end where Ronaldo is jogging through the woods and meets a stoic deer, who supposedly inspires a revelation in him. Something about the silence of the deer wasn’t working. I happened to be hanging out with a friend, going down a YouTube rabbit hole about talking birds, and it occurred to me that the symbolic moment of Ally showing herself to Ronaldo in a earthly form in that moment didn’t match her character. She wouldn’t be silent, she’d be sassy and disruptive! I changed the deer into a wildly chirping bird, and it suddenly clicked that the character Ally was presenting as a bird throughout the script, I just hadn’t put the pieces together.

Once that was sorted, I went back to the text and pulled out the themes that meant the most to me: mourning, magic, humor, lust, pain, dis-connection, nature, and love. I then color coded lines of the script that applied to each theme so I could see how they were laid out scene by scene. I thought hard about what theme I wanted to be present in each moment, and then made light adjustments to the text or action to speak to that theme more, and made sure it felt genuine.

At this point, the real Ronaldo had been receiving drafts but had been very busy so was very surprised to look up and see I was in a final draft, number 8! He didn’t realize the story’s radicalness had been toned down or that I’d changed the relationship between the two lovers. After much conversation, delicacy, and heart poured into making sure the script worked for both of us, here we are! Ronaldo and I like to think the the real Ally, from sparkly cat heaven above, brought us together.

We’re now gearing up to shoot in late October in Brooklyn and are in the middle of a Kickstarter campaign aiming to raise $7,000 to supplement our budget, with a drop dead date of October 2nd, 8pm Eastern. I have grand intentions for the film and I think after all the work we’ve put into its adaptation, it’s incredibly relatable. Indie film lovers, cat aficionados, poetry buffs, queers – there’s something for everyone!