“It’s Such a Weird Story”: Bennett Miller on Foxcatcher 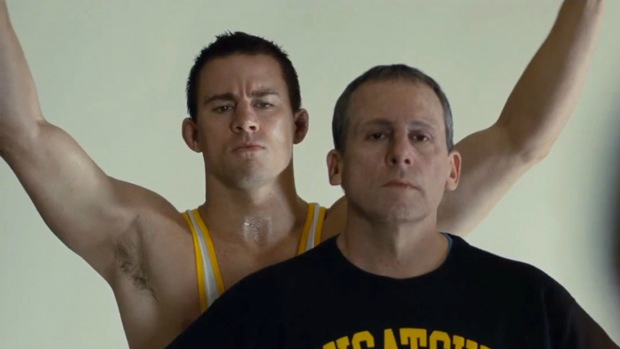 When I wrote about Bennett Miller’s Foxcatcher a couple of months ago after seeing it at the Telluride Film Festival, I called it “extraordinary… a subtle yet extremely unnerving examination of how family, class, and competition inform and are informed by the American dream.” There’s always a little danger in writing about a movie in the heat of film festival hysteria, as one can easily overrate (or underrate) a film under the pressure of weighing in with an immediate opinion. In the time since Telluride, however, my admiration for Foxcatcher has only grown upon reflection; the supremely confident restraint of Miller’s visual style and the psychologically and physically transformative performances of Steve Carell, Mark Ruffalo, and Channing Tatum reveal more layers and provide deeper satisfactions with each viewing. On the eve of its theatrical release, I sat down with Miller — who will receive the Director Tribute Award at next month’s Gotham Awards — for a few minutes to talk about how he first became aware of his story’s true-life origins and what decisions went into turning those origins into drama.

Filmmaker: This is your fourth feature and your fourth film about real people and events. Is that by design? Are you the kind of director who sets out with a kind of clear career path that you want to follow and then sticks to it?

Miller: No, no way. Not at all. It’s kind of a coincidence. All of these things are based on actual events and real people, but they also all have allegorical qualities to me and function the way fiction films function, though they draw their essence from true events.

Filmmaker: How and when did Foxcatcher first come to you?

Miller: Eight years ago, a stranger approached me at an event at Tower Video and handed me an envelope containing clippings about this story. Maybe a month later I was throwing stuff out and I opened it up. I had not known about the story when it happened, but I was immediately hooked.

Filmmaker: So right away you’re thinking, “There’s a movie here.”

Miller: I’m not even thinking, “There’s a movie here,” I’m thinking, “I’m doing this. I want to find out what this world is and recreate it.” I was just curious. I started reaching out to anybody and everyone who was involved with the real story, introducing myself and sharing my intentions and asking for their assistance.

Filmmaker: And then how do you enter that world? Were you familiar with wrestling before you started researching the film?

Miller: No, I didn’t know anything about it, and I didn’t even know much about the DuPont family. Like I said, I hadn’t even heard about this story. I started traveling around and went to wrestling matches, and I visited Foxcatcher Farm. I went at it hard in the spring of 2006, researching things and meeting people, and Max Frye [the co-screenwriter of the film, along with Dan Futterman] came on about a year after that.

Filmmaker: Some of the reviews of the film have implied that you moved the time frame up a little bit, but I was unclear about that watching the film. It seemed to be that it took place in around the same era that the actual events did. Did you alter the timing at all?

Miller: No, all of that is very accurate, though there’s a sense that we did collapse time a little on the other side, because the murder occurred in 1996. There’s a little montage that projects forward in the film and we don’t say how much time went by, but it’s likely people do not get the impression that it was as much time as it was.

Filmmaker: So you mentioned that you talked to some of the actual participants during the research phase. Were any of them involved in the actual production of the film, or in contact with the actors?

Miller: Channing spent a lot of time with Mark Schultz; he was able to study with him and learn from him and work with him in the wrestling room. As far as Ruffalo and Carell go, they had the benefit of a lot of videotape of the men they were playing and discussions with a lot of friends and family, and Dave Schultz’s widow was a major supporter. She visited the set and brought her kids and gave Mark Ruffalo Dave’s glasses, which he wears in the movie. It was a gesture that really moved us and, I think, affected Ruffalo and how he played it.

Filmmaker: I want to ask a couple of questions about your visual approach to the movie, starting with the decision to shoot on film as opposed to digital. Is that a choice that’s dependent on each individual story, or are you one of those guys who’s a film purist regardless of the material?

Miller: It’s all about what’s best for each movie, that’s all. There was an incentive to shoot Foxcatcher on digital and I wanted to feel okay about it, but we did a lot of tests and I just couldn’t get at ease. For me shooting on film makes it a lot easier to convey the period; there’s a language and a context when it comes to film stocks, and maybe a general audience isn’t attuned to it, but it’s hard for me to wrap my head around it. I just could not get comfortable with a digital look on this film.

Filmmaker: Well, the film is very spare and austere when it comes to the cinematography. There’s no gratuitous camera movement or cutting, and you let things play out in very precise frames. Take me through the evolution of the visual style on a movie like this. Do you storyboard or plan your shots extensively ahead of time, or are you responding more to the actors and locations on the day?

Miller: It’s somewhere in between, leaning toward the latter. I think it’s an important discipline to remain aware and sensitive in the moment and not be rigid about your preconceived notions. The whole film is built on a style and a process that is really dependent on that kind of sensitivity and responsiveness. There is an innate style that’s governing all the decisions that is rooted in austerity, that is meant to sensitize you to the subtleties of what’s happening beneath the surface. So there is a deliberateness there. As far as how precisely something is going to be lensed, there might be some strong ideas going in, and there’s always a shot list, but nothing is determined until I live in the space with the actors a little bit.

Filmmaker: Extending that idea into postproduction, how intuitive is the editing process for you? This is a movie that had a fairly long post-production schedule – originally it was scheduled to come out around a year ago. What’s going on during that time? Is it another case of having to leave yourself open to possibilities and push against preconceived notions to find the story?

Miller: There is a big picture that is essentially what we’re aiming for, but the movie is built on moments, and the pieces themselves are…well, each moment is like its own Fabergé egg. There are no pro forma building blocks for anything, it is about the peculiarity of each moment and finding it and refining it and aligning it within the style and sequencing it in a way that delivers. A film like this is musical – even though there’s not a lot of music in it – and how do you create these moments and scenes and chapters and acts? It’s not just about the plot. The movie is really about what exists underneath the plot, about what is underneath what is spoken. There is so much that is never explicitly expressed in the film that you’re supposed to grasp, and the way that those things are expressed is in between the notes, and that just takes a while. It means when you wrap, you have to put down all of your concepts for a moment and look at what you really have. You need to begin again and say, “These are the pieces I have and somehow these pieces are going to add up to the big picture.” You’ve seen these portraits made up of 10,000 photographs where each photograph is like a pixel in the larger scheme? It’s kind of like that.

It’s such a weird story. The characters are so unusual and so strange to me, and yet something about it felt meaningful. The dynamics within these relationships seemed relevant to me as a little microcosm that’s expressive of bigger themes. You’ve got different classes of people convincing themselves that they’re all part of the same thing, and not fully acknowledging the conflict of interests. It’s a great American story.