“It Takes a Lot to Make a Film from Yourself”: The Babadook‘s Jennifer Kent 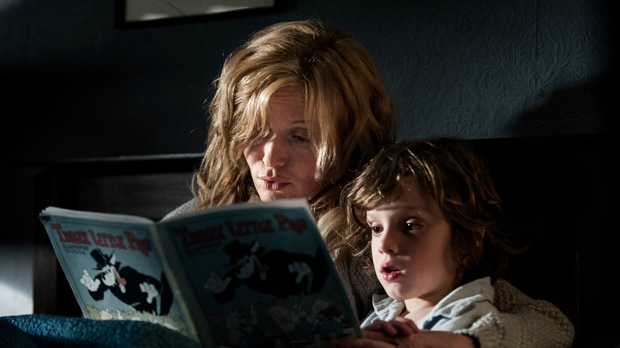 Essie Davis and Noah Wiseman in The Babadook

Jennifer Kent’s The Babadook, a frightening new film that finds the horror in the familial, opens Friday in theaters and on demand, almost a year after its debut at the 2014 Sundance Film Festival. Focusing on a mother and son terrorized by a lanky, ghost-like creature who originates from a withered pop-up book, Kent’s film does quite a lot with limited resources. Incorporating stop-motion animation, stylized lighting, and an effective use of sound, debuting Australian filmmaker Kent has a deft sense of control — a husband who dies in a car crash as he drives his pregnant wife to the hospital to give birth is pretty hefty stuff. In its depiction of a parental figure losing her grip on reality and giving in to darker, more maniacal instincts, the film may in part be indebted to The Shining; it’s more psychological than bloodsoaked.

As The Babadook gets set for release, I spoke with Kent about the difficulty of obtaining funding for motion pictures in her country, how she came up with the “Babadook” name, and why she doesn’t consider her film to belong to the horror genre.

Filmmaker: You were previously known as a film actress. Where did the desire for getting behind the camera come from and did you have a hard time transitioning?

Kent: I started out as a kid interested in both acting and directing, fascinated by the elements each possessed. It was only when I got into my teens that I decided to focus specifically on acting. I went to NIDA (National Institute of Dramatic Art), but pretty soon after studying, found myself a bit bored. So I took a natural progression back to the things that interested me as a kid. I didn’t want to study anymore, I didn’t want to go to film school. I feel like I’m where I’m meant to be now. It was a winding path, but I got there in the end.

Filmmaker: Was the horror genre something you were interested in exploring? For whatever reason, many filmmakers seem to get their start in genre filmmaking and then leave it behind for other projects.

Kent: I never saw the film as a genre film, to be honest. I saw it as a film about a woman who was trying to fight terrible things in her life. That was what kept me going in terms of developing it. The scary elements were there to support what was happening to that woman. It was a very terrifying arc in the story, that was the way I’d always seen it. I’m a bit bemused by the focus on its genre elements, but I understand that that’s how people market and sell films. I don’t think of it in those terms though, and I certainly don’t feel like “Oh, I’ve made a genre picture and now I can go and make a serious film,” because I feel that, for me, this was a serious film. It’s interesting, because the tendency now is for people to look toward people like me to direct their next genre film, but I’m more drawn to an idea, to be honest.

Filmmaker: Clips from notable Mario Bava and Georges Méliès works are shown in your film. Have these filmmakers served as big influences on you?

Kent: I’m drawn to filmmakers who manage to be an expression of who they are. People like David Lynch and Lars Von Trier and Roman Polanski, directors who manage to be who they really are. When you watch their films, you get the sense that you’re seeing their point of view. That inspires me more than a certain genre. It takes a lot to make a film that comes from yourself. Unfortunately, I think a lot of filmmakers don’t succeed because it’s so easy to lose sight of that along the way, whether it’s because of studios or development executives. It’s so easy to not make the film that you wanted to make. I’m happy to say that both the film I wanted to and did make were one in the same. It seems to have some resonance with people, which is great.

Filmmaker: What was pre-production like? Was it difficult to find funding? The movie was proudly filmed in South Australia.

Kent: It was hard, but not as hard as it was for friends of mine who have had an even tougher time. It helps that I developed it outside of Australia, and by the time I got back into the development system here, I really knew what this film was, what the story was. I worked on the film with Binger Filmlab, an incredibly supportive place. I eventually got turned down for a larger budget and we had to rethink things. We approached Screen Australia a second time and received the funding by agreeing to shoot in South Australia. I won’t say it was easy. It was a nightmare, like every film is! But it happened and we got made. I get the feeling it’s really hard to make independent films in America. We have government money here in Australia that definitely helps.

Filmmaker: How did you arrive at the name “The Babadook”? Is it because of its (as the film demonstrates) unlimited couplet rhyming potential?

Kent: That certainly helped! There aren’t many easier names to rhyme with then that, and that was a good one. I really wanted something that felt like we could create our own myth with it. The name didn’t exist in any other context and so people would only associate the name with our story. It didn’t have any previous meaning.

Filmmaker: How did you come up with that disorienting opening sequence of the car crash?

Kent: I’m glad you mentioned that. [laughs] I’m really proud of that! We shot all of that in-camera, and it was really hard turning around and upside down like that. I didn’t want to start with a dream sequence. When we’re dreaming, we feel like we’re really experiencing an event and we forget that we’re dreaming. I also wanted to set up the question in the film of what’s real and what isn’t, how blurred the lines are throughout the story. I wanted the audience to feel this character’s feelings alongside her.

Filmmaker: Your scenes feel clipped at just the right moment to emphasize the passing of time or the result of a gruesomely comical moment, i.e. the son balancing on the top of a jungle gym at the park, or a later scene featuring a young girl being knocked out of a tree house. The editing serves, if not as a punchline, then a witty advancement to the next scene.

Kent: I think it was written in the script that way. You don’t want to muck around with “This person walks in the door, this person walks upstairs, etc.” There’s a compression of time in editing. I try to be aware of it, as film is as much about rhythm as it is visual. When people say “I saw a sequence in the film that made me so anxious,” it’s because all of it has to do with editing and time. I had a brilliant editor who was certainly aware of that too. In film, time is stretched. It’s like an accordion and you have to stretch time to make films more visceral and more frightening. As the film progresses, many of the moments that feel quite dream-like are very stretched and feel much longer than they usually do in real life. It’s about distorting reality so that you don’t feel comfortable and you don’t know what’s coming.

Filmmaker: It’s even striking in the quieter moments, such as when our heroine is laying in bed and you provide a time-lapse by keeping the camera on her, fast-forwarding through her discomfort as she sleeps.

Kent: For me, there’s always an emotional motivation for those choices. I wanted people to feel like they’re not getting any sleep watching the film, like we’re going through that with her. She feels like she’s never resting.

Filmmaker: The house is beautifully designed with its bluish grey interiors and checkered kitchen floors. Were the interiors shot on a soundstage or in an actual home?

Kent: We had to build a set. I secretly wanted to do that anyway, because it meant that we could shoot small and distort things if the film got crazier. The house served as a living, breathing entity. I’m really happy that it happened that way, that we had to build a set.

Filmmaker: The end credits offer thanks to your Kickstarter supporters. In what ways did they help you?

Kent: Kickstarter was incredible in that they gave us that house. Without Kickstarter, we’d have a pretty flimsy-looking set. The construction of the house was meticulously planned. It had real floorboards and was very large. All of that had to be created. The money went to that construction and we would have been lost without it.

Filmmaker: How did you work with your Director of Photography and Art Director? Your lead actress’ blonde hair and pale skin seems to blend in perfectly with the coldness of the darkened rooms.

Kent: We collaborated on everything. I love to work with actors, and I love actors, but I’m very visually focused. I knew that [lead actress] Essie wanted to come to the set with black hair [which she had dyed for a television program in Australia]. I told her she had to arrive with her natural hair color, blonde! She didn’t want to dye it back and we had a real battle about it. She would have disappeared on set if her hair was black. Since everything was very much discussed with my director of photography, production designer, and costume designer, there had to be very conscious decisions from all departments.

Filmmaker: There are great visual clues of the Babadook’s presence throughout the film, most explicitly in the two sequences where see his coat hung up in various locations.

Kent: There are two layers to it. The top layer is the book in the film itself, and the bottom layer is when the book notes, “Can’t you see what’s underneath? You’re going to wish you were dead.” The bottom layer is more about shadows and suggestion. It’s about her response to what we don’t see. The bottom layer is playing at being a human. It wears a coat, a hat, a mask, a wig and gloves. You can’t see any skin. It looks like a human, but it’s deconstructed. There’s nothing really human-like about it. It was fun to leave elements of disguise around her house or around the scene in the police station. It was fun to play with, and it helped to keep the Babadook’s presence alive without actually showing it.