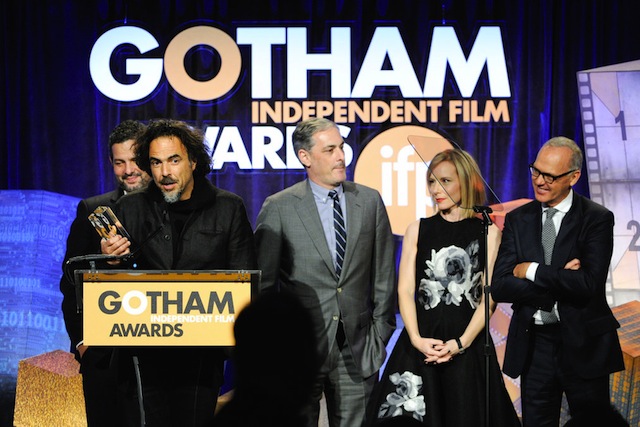 by Sarah Salovaara
in Festivals & Events, Filmmaking
on Dec 2, 2014

One of the more enjoyable aspects of the Gotham Independent Film Awards is that there aren’t really any politics involved. The nominees are selected by critics, and the juries are comprised of filmmakers and actors, resulting in your fair share of wild cards, while the rest of awards season continually awards the pre-ordained “frontrunner.” Last year, it was great to see Inside Llewyn Davis take home the top prize, even if it was scarcely nominated elsewhere. Last evening, at Cipriani Wall Street, there were a few surprises, but I’d wager that Julianne Moore and Michael Keaton are going to continue apace all the way to the Dolby.

After its big wins for Best Director and Best Film at the New York Film Critics Circle earlier in the day, Boyhood nabbed the Audience Award, while the NYFCC empty-handed Birdman went home with the top prize. Ana Lily Amirpour, one of our recent crop of 25 New Faces, took home the Bingham Ray Breakthrough Director Award, while another 25 New Face, Chloe Zhao, won the Calvin Klein ‘Live the Dream’ Grant and a $25,000 check for Songs My Brother Taught Me, which is currently in post. Tessa Thompson beat out Jenny Slate and others for the Breakthrough Actor Award, and Laura Poitras received Best Documentary for CITIZENFOUR, our current cover story.

The highlight of the evening for me was Tilda Swinton’s acceptance speech for her Tribute award, which began with “Amy fucking Schumer,” and ended with a hearty thanks to her dental technician who produced four sets of prosthetic teeth for her in the last year, for her roles in Snowpiercer, Only Lovers Left Alive, The Grand Budapest Hotel and The Zero Theorem. She also dispensed some Derek Jarman wisdom: “Get there early, be prepared to hold your own light, and don’t expect to be paid. And have fun with your friends.”