Never the Twain Shall Meet: Maidan 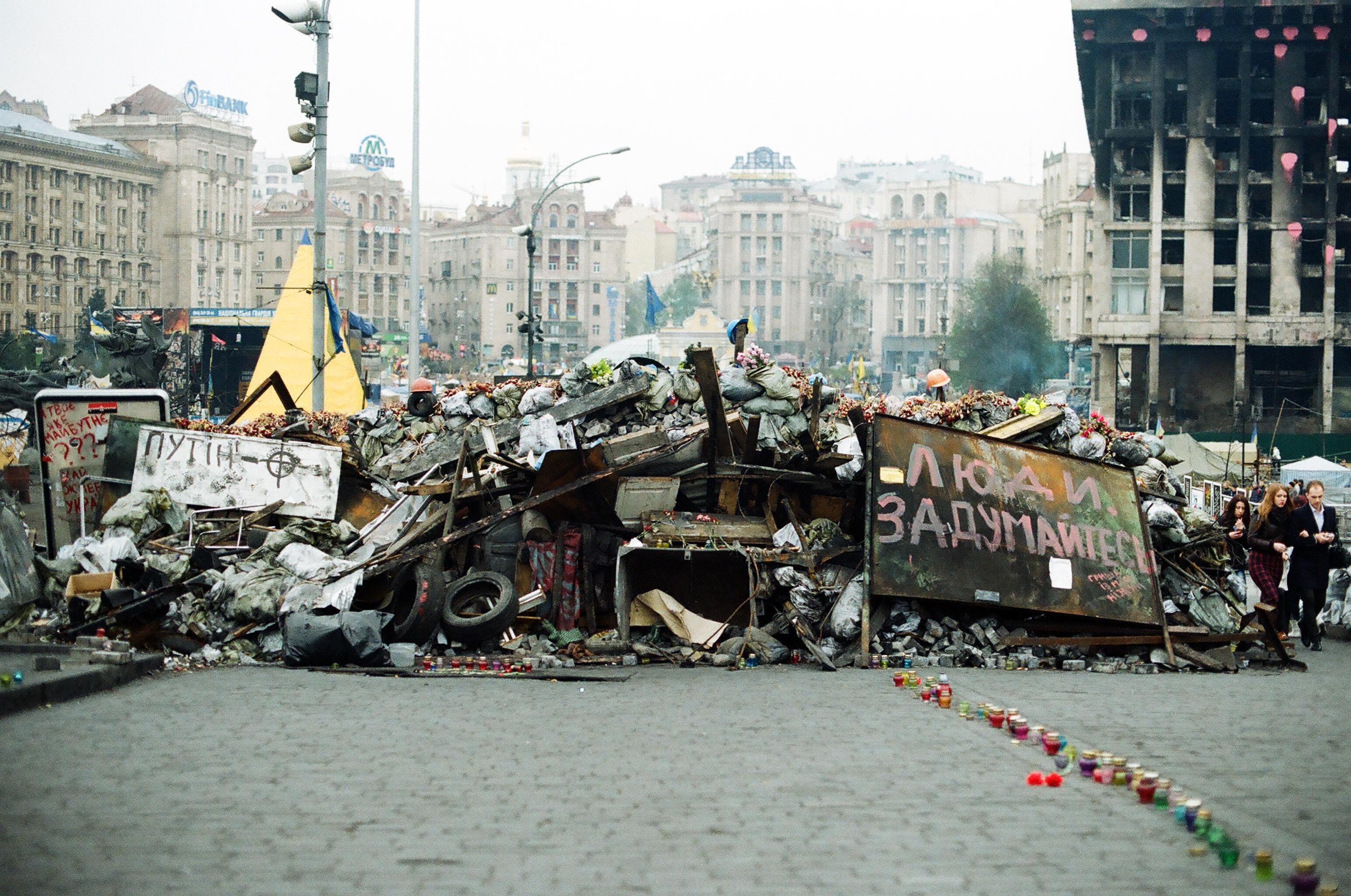 In the Fog, Maidan, My Joy, Sergei Loznitsa

Our own separation of church and state is tenuous. From the Pledge of Allegiance: “…one Nation under God, indivisible…” Less official but equally patriotic are the lyrics of Irving Berlin:

God bless America,
Land that I love,
Stand beside her and guide her
Thru the night with a light from above;
From the mountains, to the prairies…

Few would confuse our glib phrasings with imminent theocracy and unchecked nationalism. Pantheism aside, you might say that, if you can disregard Native Americans in the same way that our government always has, the land itself is secular.

The three are conflated in the Ukraine of Sergei Loznitsa’s supernal Maidan, a rigorous, unflinching film documenting last year’s uprising on Kiev’s Independence Square, aka Maidan. At the beginning of two of the three loose acts dividing the film, a crowd sings the National Anthem, one which takes pride in the ancestry of the “Cossack nation” and tells us that “freedom’s loud song…will sound through the steppes.” After it’s over, the assembled shout, “Glory to Ukraine! Glory to the heroes!” These words are often repeated during the three months of rebellion by whoever holds the mic on the large impromptu platform that is as much pulpit as stage, after which they are echoed by the gathered protesters.

At times the words are yelled out of the blue, like a catch phrase. Given the abundant iconography and religious songs, numbers of Orthodox priests on the podium, and references to God and saints in poems and speeches magnified by the sound system and large screens, “glory” should be understood in the context of Christian theology: God is the most glorious being, and humans, who are created in the image of God, can be (imperfect) image bearers of his divine glory. The civil unrest becomes as much a religious as a civil war. For many in America, observing the mix can be as frightening as it is infectious.

It should come as no surprise, then, that Maidan is loosely structured as a religious mass. It begins with the singing of the anthem by a surrogate choir and the shouts of glory; observes preparations for disruption on one of the city’s main squares; crescendos at the halfway mark when the assembled and a mix of policemen and special forces engage in full battle; then fizzles into a grim, quiet aftermath in which detritus and coffins replace fighters as the center of attention. Maidan becomes a funeral mass.

This is the gist of the conflict: Aside from important secondary considerations such as President Victor Yanukovych’s outrageous level of corruption, even by eastern bloc standards, the point of contention on the Maidan is whether Ukraine turns westward, which would be finalized by the signing of the Association Agreement with the European Union; or whether it would increase its reliance on the East, becoming a member of Putin’s Eurasian Union of former Soviet states. The ups and downs of fighting correspond as much to Yanukovych’s decisions on the nation’s alliances (he is from Russia-oriented eastern Ukraine) as with reports of excessive police force.

Loznitsa is clearly on the side of the protesters: Born in Belarus, raised in Ukraine, and at present a resident of Germany, he is on record championing greater ties with the West. We know that necessary choices make film subjective on some level, but Maidan comes pretty much as close as possible to true documentary, high-level objectivity. That noted, there is no overt agenda attached to the formal principles underlying the film. Loznitsa sets up his apparatus to enable spectators to relive the revolution. It unfolds before multiple cameras in fixed positions arranged around the Maidan. (The third act takes place on a neighboring street, Institutskaya.) Cameras do not follow the action; it is merely recorded (with sound on multiple tracks combined in post). A battle might be visible in long shot, while in the foreground protesters walk or run past the camera, occasionally acknowledging it, at other times unknowingly blocking it.

Takes are of mixed length at the beginning of the film, and the shots mostly medium, but once the fighting commences, the takes become longer, the shots extremely long. Events being unpredictable, the cameras take in an vast amount of information. Loznitsa refuses to fragment time and space.

As in My Joy (2010) — a road movie about a truck driver, with the added value of several other shorter narratives — we

know the ending from the start. In that feature, however, Loznitsa deployed temporal twists indicating spatial discontinuity. One story is followed by another taking place decades before or after; we often return later to the first narrative or characters in it. In addition, there are stories within stories, dissolving temporal boundaries yet another way. One location suddenly replaces another, a far cry from the connectedness inherent in this documentary’s long takes. In In the Fog (2012) — a more conventional wartime tale about two Russian soldiers and a probable collaborator — time is continuous, space is contiguous. Even more relevant to the vision that would become Maidan, each scene is comprised of only one shot.

No voiceover or narrator guides us. Background information and ensuing action are not fully explained. Our only clues are a few brief title cards. We piece things together from the speeches, the tone, the views. Images and fragments of cell phone and in-person conversations help us understand the confrontations that occurred between late November 2013, when a group of students gathered in protest and the square became known as “Euromaidan,” and February 22, 2014, when Yanukovych fled the country for Russia, ending the strife, granting victory to the rebels, and signaling, finally, a shift to the West. In between these dates, the authorities sent in the Berkut, the feared special forces, who initially bloodied the participants, then were repelled; larger scale battles took place after the president sided with Putin, then again after the government announced anti-protest laws; a ceasefire went into effect but lasted only one month; and more fighting ensued. Nearly 100 died; an equal number were unaccounted for.

By the end of the strife, the median age of the demonstrators spiked to 36. On background, we know that they learned something valuable from the Orange Revolution of 2004: They now sought power in the people, not among the opposition leaders. The latter only arrived on the scene after the momentum had begun, and never really caught up with the protesters, who had organized themselves on and around the square as efficiently as Loznitsa had set up his shoot. They were no longer dependent on the old guard.

Loznitsa doesn’t just highlight revolution as spectacle, the violent clashes and melancholy aftereffects. He also films such non-sensational subjects as preparation of food for the demonstrators, jerry-rigging the barricades, sussing out government plants by a system of monitors and ID badges, the removal of refuse by volunteers, how journalists zip about a battle zone. The film is a crash course in preparation for revolt, shedding light on both the minutiae and the fighting itself: throwing stones, dodging rubber bullets and avoiding real ones from police on the ground and snipers on the rooftops, skirting water cannons, wiping eyes stinging from the ubiquitous tear gas.

Maidan is gorgeous if stark. It never crosses the line into aestheticizing the revolution, the suffering and brutality that come along with it. Its artfulness stems from obsessive precision. (Loznitsa studied math and engineering before starting his career as a scientist.) Three cinematographers — the director himself, Serhiy Stefan Stetsenko, and Mykhailo Yelchev — film details in the first half with clarity; in the remainder, when a smoky pall hangs in the air, they shoot them through a haze. The events, as terrible as they are, engage eye and ear. Demonstrators move in waves with their bodies against policemen wielding batons and protecting themselves with metal shields. They run toward them and hurl stones, then quickly retreat. With the views afforded by long shots in long takes, the whole unintentionally simulates a well choreographed ballet. Such is the nature of revolution: Groups work in sync. Loznitsa and his team are in place, properly equipped, ready to document.

You remember the issues, no matter how you learn about them, but at the same time you recall vivid images of numerous blue-and-yellow national flags waving in the wind and people standing like extensions atop old monuments. The grand buildings around the Maidan are floodlit at night. This is theater. When mourning the dead, the assembled hold up the lights of their cell phones — the candles of the 21st century — against the dark sky. The silhouettes of protesters and soldiers against fire and smoke resemble engravings, yet naturalism is the order of the day. The short documentaries that made Loznitsa’s name at the start of his directorial life are revisionist actualites and collages of newsreels and other found footage. You register Maidan just as you do the well-known paintings of horror from, say, the Spanish Civil War and the French Revolution: Not an interpretation, but an artwork capturing the truth of a historic moment.