“Finish Your Scene Before You Go to Lunch”: Five Questions for After the Fall Director Saar Klein 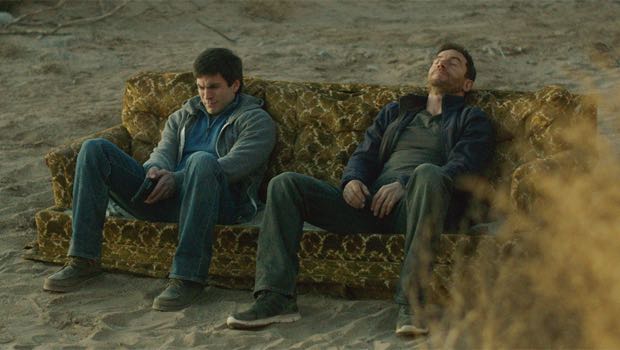 First-time director Saar Klein got his start in Hollywood as an editor, where he’s been working with top directors for the past two decades. He has two Academy Award nominations under his belt, for Terrence Malick’s The Thin Red Line and Cameron Crowe’s Almost Famous. His feature debut After the Fall joins the strong lineup of this year’s recession-era dramas.

Wes Bentley plays a mediocre insurance appraisal agent who loses his job after being too generous with payouts. He turns to a life of crime in order to make payments on his house and keep his family above water. Becoming a petty burglar almost by accident, he goes on a short spree of convenience store robberies. Although he leaves his fingerprints on everything, and appears on numerous surveillance cameras, he appears to get away with it, thanks to a detective friend, played in a standout role by Jason Isaacs. Framed by stark desert landscapes and real-life emotions, Klein has made his mark as a new talent to watch.

Playing under its international title Things People Do at the 14th Marrakech International Film Festival, Klein shocked local audiences with how far the average man can go under desperate times. Filmmaker Magazine caught up with Klein to find out just what he learned as a first-time director, and how he put his incredible editing knowledge to work behind the camera.

After the Fall is being released on VOD Friday, and in theaters for one week only in New York and in Los Angeles.

Filmmaker Magazine: What did you learn from making this film, as a first-time director?

Saar Klein: This is very practical, but minimize your locations, because set-up time and travel time will kill your days. If you have to get guys in a van, even a small crew, and drive half an hour, you’ve lost three hours.

And finish your scene before you go to lunch. It’s very practical because when people come back after lunch, they are very sluggish, and if you have one shot left, that shot’s going to take you two hours. So it’s a lot of practical things like that.

Try to limit working in cars as much as possible because they are very dull. You can’t communicate with your actors. They take a lot of time and they look like shit. And when I was working with my AD, Atilla Yucer, he was like “Just try to limit these cars.” And I was like, “Yeah, but Alfonso Cuaron did it in the Children of Men, and that was amazing.” And he was like “Are you out of your mind? That thing took a month to shoot.”

Filmmaker: What was most challenging for you during the shoot?

Klein: It was really about management of time and the stress of not having enough time. When you’re making an independent film, you get one shot at doing anything. So what’s interesting about it is, as an editor, you have to distill everything to its essence. When you go in the morning, and your producer and your AD sit you down and tell you that you have five scenes today in this house and you can only do two, you fight for a little bit, and then you think, OK, I can spend the next minute fighting or I can figure it out. Does this have to be interiors? Does he have to walk into the house? Is this something that we’re going to cut out anyway? And then know when to fight for things that are really, really important to you. To say, “No, I know that this is a small film, but this is an essential.”

Filmmaker: What did you have to fight for in this film?

The dog ended up being great, and that’s when the expertise comes in. I was like “Let’s just have the dog roll around, and then faint, and then bark.” And my AD said, “Listen, if we can get this dog to lie down without moving, it’s a huge victory.” And I fought that a little bit and then I realized he was right. We’re making guts out of Twinkies and condoms filled with ketchup, and the dog wants to eat it.

You have to really rely on your crew for their experience, and always separate what’s best for the film from what’s best for your ego. The ego is just a huge thing that you have to battle daily on the set. So think why you’re making decisions, because you want to be right or because it’s right for the movie.

Filmmaker: Looking back on your editing experience, is there something you understand now more in-depth about the directing process?

Klein: There were shots that were missing here, and in my past experience I would be like, “What is wrong with this director, he’s a complete moron.” And I would be completely frustrated by the inadequacy of the director. Like “What the hell, can’t you just cover this for me?” And then I realized the difficulties, and then I also realized the level of paranoia and isolation that one feels as a director.

During the film, at one point, I called Terrence Malick and I said, “Hey, I need your help.” And he told me, “You’re in a very lonely place and you feel very alone and you are, but, you know, this is the process.” He really emotionally expressed exactly what I was feeling, which made me realize it’s a universal situation that happens when you’re trying to do something, and it’s so important to you, and you’re so driven that it brings up weird psychological issues for you.

So I definitely have respect and empathy and I think that’s why there’s such a bond between different directors everywhere. They share their misery. It’s sort of a miserable experience that you love.

Klein: The quality of editing really is about who you are and your view of the world. That’s what it comes down to. Technically, every kid can spend two hours in Final Cut and know how to edit, but technical skills are not that important, I think. What’s important is who you are, what you think, and what moves you emotionally. Editing is about that little stuff: story, structure, and technique. Then it’s about your views of the world, your music, your internal rhythm, what interests you.

Like any other business, if you’re difficult to be in a room with, it’s not going to help, because the relationship is so intimate. This is the most intimate relationship, between an editor and a director. You sit in a room, but you’re also an editor, a shrink, a lover. A lot of times you want to kill them. And you’re the most trusted. You’re the one who says, “I don’t care how much time we spent on this shot, it fucking sucks,” or “We don’t need it.” You need to be the truth.