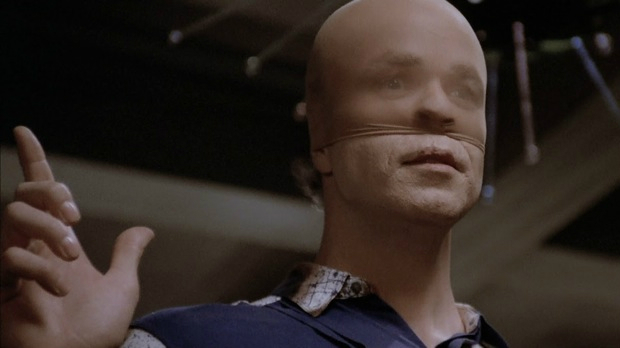 With Michael Mann’s Blackhat opening this Friday, last night was an appropriate time to screen an earlier film at New York’s IFC Center. Generally noted as the first Hannibal Lector film (“Lektor” here), 1986’s Manhunter relegates Brian Cox’s (delightful, to be sure) take on the character to a handful of scenes. The bulk of the serial killer action lies with Tom Noonan as Francis Dollarhyde, aka the “Tooth Fairy.” The imposing actor first appears with a stocking tied around his head, which doesn’t disguise his face but only makes him look more sinister. Below, the highlights of Noonan’s Q&A looking back on working with Mann and receiving the director’s Christmas cards, using two PA’s to stay in character and avoid contact with others, and shooting all his scenes with and without tattoos.

On getting the part: Even though it was early in my acting [career], I still had done a bunch of weirdo parts. I am sort of weird, but not that bad. I got this script and I read it and was like “Oh my god, do I really want to do this?” Not that anybody was going to give it to me, I really hadn’t done much.

I went up to this casting place, and I saw they’re bring in all these people from Steppenwolf — the theater company in Chicago that we all love so much. I had an appointment at 10:00 and then it got pushed to 10:30, 11, 11:30. I was starting to get really unhappy, and all these people are going in — I think from Steppenwolf, that’s probably just my paranoia. Finally they brought me in and I was really fucking pissed off. That’s all I knew: I was going to get in there and I was going to read the fucking scene, and just leave.

So I was really mad, I didn’t have a plan about how to do this thing. I go in and Michael’s there. Michael’s sort of a scary guy, even though he’s not huge, and I learned over time that you really don’t talk back to him or give him shit, ever. He’s like Napoleon. I walked up and I said, “Listen, I’m gonna read and then I’m gonna leave, OK?” He said, “OK.” I sat down. There was a woman reading with me, who apparently was a casting assistant but now she was the casting person and was going to read with me. They put her opposite me, and I don’t know…I didn’t do anything, but she started to get really frightened of me, which made me feel really excited and full of myself. Michael got real excited and started wandering around the room. I could feel that he was really into what I was doing too, and I thought, “I got this job.” Then I finished, and he started to talk to me. I said, “I told you. I’m reading and now I’m leaving.” I just walked out.

Now, I’d not worked much. I was making a little bit from my acting, but I was really poor and desperate, and this is a real part. I proceeded then to turn it down about five times. I just wanted to get paid more than they were willing to pay me. They wanted to pay me like $35,000 to do this whole movie. That was money back in 1985, but I said, “I’m not doing it for under $100,000.” My agent said, “You’re crazy.” Somehow, they ended up giving me that amount of money.

On Mann firing the art department and other on-set tension: Michael and I became very close during the shoot, but we almost never spoke to each other. He just sort of loved me, that’s how I felt as a person. He used to send me Christmas cards— very fancy, with pieces of wax paper — but he stopped doing that.

One time he was shooting, and I said something to him; it was not disagreeing, but I wasn’t level. He took me outside and said, “You can say anything to me you want, but don’t ever say anything in front of the crew.” Other than that, he never talked to me. He would yell at people a lot. He would make Joan Allen cry sometimes. I thought she was really good. Sometimes she’d do a take, and he would say things “What the fuck? You think anybody’s gonna believe that shit?” Maybe I’m exaggerating, it’s been a while.

There were probably 60 or 70 people on the crew, and there was turnover of like 80 jobs on the movie. The first scene I ever had was when I’m stting in this van and Joan is on the front steps. There was a little tiny imperfection in the van that wasn’t even in the shot, you’d never have seen this in a million years. He complained to the producers. He was really upset, and the guy disagreed with him a little, and said “Michael, just calm down, they’re gonna fix it.” He said, “No, I’m telling you what’s going to happen. When I turn around, they are not gonna be there. I’m never going to see anyone again in the art department.” And the guy said, “OK, Michael,” and all these people just left.

On Mann attempting to wear him down through multiple takes and a hellish two-day shoot: He let me do what I wanted to do. He rarely even directed me. He would say, “You’re gonna start over there and you wanna go over there,” and I would just do stuff. The thing he would do, which I’d never run into — I would do some really emotional thing, like when I’ve got Stephen Lang [as a kidnapped journalist] tied up in the chair. It was hard to do, and we did it 15, 20, 25 times. I could tell he was trying to break me. Maybe I’m making that up, but he wanted to see how many times I could do this very emotional thing. I’d never experienced that, and that doesn’t happen a lot.

There’s a scene where I have sex with Joan Allen — I think the only time I have sex with anybody in a movie. She goes to sleep, and I’m laying there. I take her hand, put it on my face and I get really upset. For me, that was the main thing I really wanted to do in the movie, I really wanted to be upset when that happened. We shot that scene all day long. Every time we got right to the point where we were going to get to that shot, he would say, “Let’s go back and cover this and that.” We shot for 22 hours, and never got to the moment where I do this. It was light outside, they put blacks over the windows, and he came to me and said, “I think we’re going to stop now. I think you’re back here in an hour and a half.” Between the two days I was going to get an hour and a half break, and the next day we shot again. As I was about to leave, he went and took his wallet out, gave me $20, and said, “If you find something when you’re out, before you come back, that would make the set a little more personal for yourself, get it.” I went, “Sure, man.” I don’t even know if I drove home. I came right back to the set, he started shooting again. We shot for hours and hours and hours before he ever got to that thing that was really important to the scene. I felt like it was sort of intentional.

On getting in character and avoiding other actors: [Mann] came to me early on and said, “Is there something that we could do that would make it easier for you to do what you’re doing?” I said, “I don’t think so, but I’m not going to say no. It’d be great if I never had to see anybody in the movie who’s trying to kill me, or who I’m trying to kill.” Which is basically everybody. He said OK, and this memo went out to everybody in the cast and crew, saying “No one can see Tom again. No one will talk to Tom. Everybody will avoid him.” I started flying in separate airlines, staying in different hotels, and I had this whole end of the studio where only I could go. Over time, it got crazier and crazier. There was a PA walking 20 feet in front of me and 20 feet behind, so I never ran into anybody. It was interesting, but it was really odd.

On sitting in the dark with Michael Mann: Another weird thing in the same vein: I was in my room. It was dusk and I was practicing writing left-handed. I wrote all my notes [in character] left-handed. The ADs were the only two people allowed to talk to me. One came into the room and said “Francis, we’re a little behind, it’ll be another 40 minutes.” He reached for the light switch to turn the lights on, and I said, “Francis doesn’t use lights.” God knows why I said this — I was bored. So then word went out that I never had lights on in my room. I couldn’t put the lights on any place I ever was in the movie, and we shot everything at night. The crew started getting really weirded out by all of this.

Michael would come some days and knock on the door and say, “Francis, it’s Michael.” I said, “OK,” and he would come in and we would sit in the dark together in my camper for long periods of time and not speak. It was really cool. I had never been in another movie, really, and I felt it was going good; the director was hanging out in my camper with me, not talking.

On elaborate character tattoos that never got used: Michael wanted really authentic-looking tattoos. We were down in North Carolina, and he would bring all these bikers from the south. They would just draw on me. They would put me on a table, and after they waxed me — during which I would scream, yell and get blistered — these guys would draw on me with regular felt, heavy-duty markers, all day long. The next day, they would try to get it off me. Michael would come in: “No no no, gotta get rid of that wing.” They would scrub me down, I would go to the gym to work out, then I’d come back and they would draw on me again. This went on for weeks, and in the end they didn’t use it. They shot everything both ways, so there’s footage of me in all of those scenes, with and without.