“Reality is Not, I Believe, a Fixed Entity…”: Michael Madsen on Alien Encounter Doc, The Visit 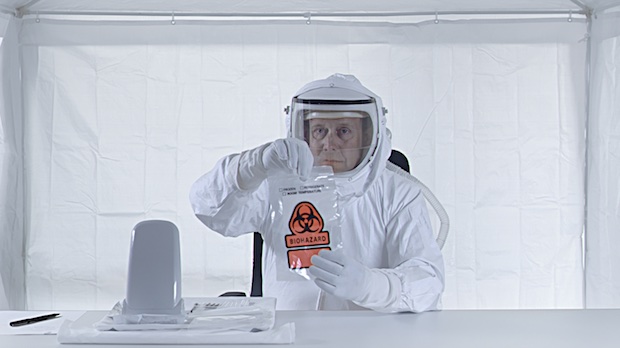 As a conceptual artist Michael Madsen doesn’t so much create nonfiction films as craft mind-blowing experiences, introducing even the most jaded of us docu-philes to people and places we’d no idea even existed. (Prior to IDFA 2010 I, for one, never knew about Finland’s nuclear waste storage facility Onkalo, the subject of Madsen’s Into Eternity and an underground cavern the size of a large city set for completion in the 22nd century.) In his latest The Visit the Danish director turns his attention and limitless imagination towards mankind’s first encounter with alien intelligent life. With the help of expert guides — an international array that includes military men, theologians, government spokesmen, and even scientists from the United Nations’ Office for Outer Space Affairs (yup, who knew?) — he takes us step by step through a hypothetical scenario both exhilarating and deeply humbling. Filmmaker was fortunate enough to speak with the philosophical polymath prior to the film’s U.S. premiere in Park City on Sunday, January 25 at the Prospector Theater.

Filmmaker: So I’ve been anxiously awaiting this follow-up since discovering your last mind-blowing art doc Into Eternity at IDFA four years ago. Like with that film I’m kicking myself for having had to watch it on screener rather than on the big screen. But I almost feel like even the big screen is too small a format for your work. You create immersive spectacles that require not just surround sound but practically scream for surround screens. So I’m wondering, why even work in the film medium? As a conceptual artist don’t you find it too constricting?

Madsen: Well, this summer I co-developed and curated an exhibition on human happiness at a cultural museum in Denmark (for which I earlier created Denmark’s first 3D documentary, The Average of The Average, in 2011). The spatial aspect, the use of objects, and the “topography” — in a way, the tactile dramaturgy of a wandering audience — came into play. But film is interesting, I believe, because film is the mass media of our time in a wholly different sense from museums, etc. Film is, in a certain sense, what the world seems to be trained in watching. Even though I am not interested in the film medium as a carrier of mass entertainment, you can, I believe, use the medium as a kind of Trojan horse within the audience to create films about something more. Or put another way, sci-fi as a genre can be quite entertaining; yet the really good sci-fi always entertains the question about what reality really is. So what I am trying to say is, that I am very interested in genre in terms of reception, expectations, and prejudices already existing within an audience. Any film ultimately really plays out inside every individual spectator, fused within the imagery of your mind, memory, emotions, etc. For this reason, surround sound and such really should be secondary if one is able to make a, well, proper film for you to see for — and because of — yourself.

Filmmaker: Can you discuss the genesis of the film a bit? How did this idea even develop?

Madsen: The consequences of a direct encounter with alien intelligent life has always stood for me to be the ultimate event in human history. I simply cannot think of anything surpassing this. And I suppose that, in general, I search for this kind of “probe” to propel me into a general wondering about what this world, this present-day civilization in which I live, really is. Reality is not, I believe, a fixed entity, but is very, if not fully, dependent on how it is interpreted. (Think of the recent terror attacks in Paris. Someone understands this world very differently than I do, and must feel terribly threatened, perhaps precisely because everything is in flux.) And with The Visit I am very interested in the nature of human self-understanding, which will be the real ground zero for any such encounter to unfold. This potential loss of control — this sudden, explicit uncertainty caused by the presence of something from another world — is a very interesting blind angle with which to look at contemporary western life, I believe.

Filmmaker: I’m also curious to hear about your Halden Prison in 3D, part of Cathedrals of Culture at last year’s Berlinale. How did you get involved with this Wim Wenders project?

Madsen: Wim Wenders had seen Into Eternity, about the world’s first attempt at storing high-level nuclear waste, in architectural terms, as potentially the first post-human structure ever consciously erected, and simply asked me to be the first to participate. I chose Halden Prison because I was not interested in interpreting “Cathedrals of Culture” as the obvious — and therefore noncritical — celebration of a society’s self-understanding, as is the case with operas and museums. Rather, I was interested in the one point where society ends — the prison, where you place the citizens deemed inappropriate to take part in society. But just as with museums or other cultural manifestations, such “public services” are ultimately created with a desire to shape — perhaps even create — citizens. Halden Prison, called the world’s most humane prison, is very interesting because it is one giant state-of-the-art piece of rehabilitation technology. The aim in Halden is not punishment but to reintegrate the criminals into society. The strategy is for the prison to — within the wall — mime and perform “normality” outside in society. But then the real question, of course, becomes, “What is normality?” And this is what my interest was with this film. Concerning Sundance, I cannot say why the series won’t play there, but the Halden Prison part will play at the Documentary Fortnight at MoMA in February.

Filmmaker: I remember when we last spoke right before the Film Forum premiere of Into Eternity you surprised me by saying that 2001 wasn’t much of an influence on that doc. But in your latest you even use music from Kubrick’s masterpiece. What influences do you cite for The Visit?

Madsen: I thought more about Antonioni’s films than Kubrick’s for Into Eternity. But for The Visit – which I had just begun working on during that stay [in New York], I was reading Kubrick’s research interviews for 2001, Are We Alone. I later specifically watched 2001, and on the soundtrack of The Visit quote this film. But ultimately I only did this because the song is the Strauss waltz Blue Danube, and the major part of The Visit takes place in Vienna, as this is where the UN Office for Outer Space Affairs has it headquarters – next to the Danube. But one can, of course, hope that if The Visit goes interstellar, aliens one day will also sift through human film history and backtrack to Kubrick, and so have the chance to admire the visual precision of 2001. Not to mention his attempt to create a new type of film and/or cinematic narrative — film as myth, as something beyond narrative, tapping into a much deeper understanding or negotiation of human life.

Filmmaker: Finally, I noticed that Nikolaus Geyrhalter — another one of my favorite documentarians — is involved in the production of The Visit. Your styles and sensibilities are very similar, including a fascination with lifeless (alien-like) spaces, with overwhelming machinery and technology’s indifference towards humanity. How did you start working with him?

Madsen: This was a suggestion by my producer, Lise Lense-Møller, who knew Nikolaus’s producer, Michael Kitzberger, who, along with Geyrhalter Film, took stunningly good care of the quite heavy and complex film work in Vienna. Without this team there would have been no film. Nikolaus I know better just through his films, and it is true that we seem to share an interest or lingering, requiem-like affection with this world. Perhaps we both think that the lifeless, first and foremost, tell the tale of so much more potential life.